Mysterious Marauder at the Blue Heron!

I stopped by the Blue Heron this afternoon. The temperatures are in the low 50s and I thought I might see some bees. I really miss my bees at home and wish I had a hive to watch everyday here as I used to.

When I arrived, Julia's hive was opened up with the hive top feeder exposed to the sky. The inner cover, the ventilated inner cover and the hive top were neatly stacked on the ground behind the hive. The hive top covered everything and was top side up, unlike we would place it during an inspection.

Wonder what kind of creature would do this? I imagine it might have been a raccoon whose paws/hands are small enough to push from under the hive top. But if a raccoon opened the hive, why didn't he stay around to drink the syrup?

Sadly the open sugar syrup swimming pool was filled with drowned bees. Julia had called me from the Blue Heron on Friday when the temperatures were in the 60s to say her hive top had been moved slightly off. I guess the marauder returned after she left to finish the job.

Julia and I decided I should dump the feeder on the ground to stop further drownings and put the hive back together. In removing the feeder, I slid the second box (I had no hive tool with me) and found to my sadness that the hive contains no bees. I called Julia again and we thought leaving the hive empty on its site might serve to lure a swarm in the spring. 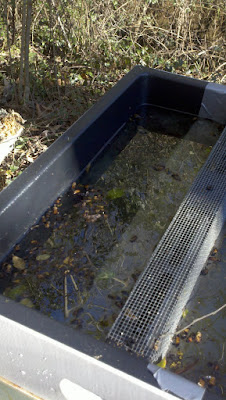 See all the sad, dead bees floating in the syrup? These aren't my usual quality of pictures because I took them with my phone. 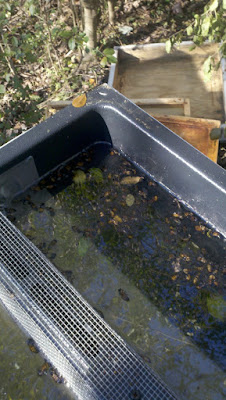 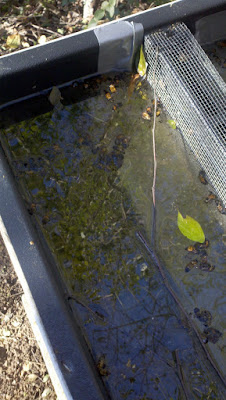 My hive had bees flying out of it. I tried to catch a picture when there were three or four on the landing, but I only caught this one (in ten photo opps!) Oh, well. There are bees in my hive. Let's hope they continue to live through the rest of the winter. 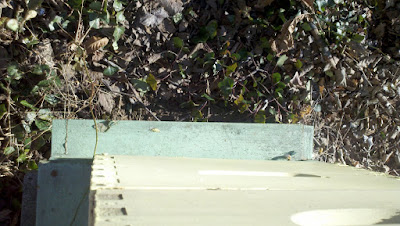