Nest Homeostasis in the Bee Hive 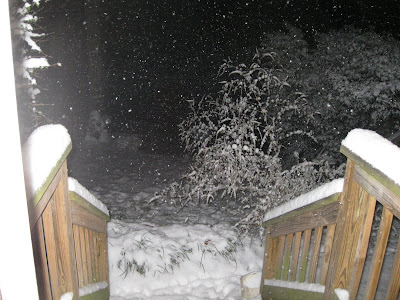 What do beekeepers do when they are snowbound? Read about the bees.....

So I'm reading Winston about what goes on in the beehive when it's 29 degrees and icy outside.  He writes about colony homeostasis which is the maintenance of the constant temperature in the hive on pages 116 - 122.

Clusters start to form at around 18 degrees C (64 degrees F).  The cluster is working as a unit to maintain temperature homeostasis when the outside temperature is around 14 degrees (57.2 degrees F).

When it gets really cold (-5 degrees C or 23 degrees F), the cluster doesn't get smaller, but the workers in the center generate heat by contracting their thoracic muscles (the ones used for flight).  They can contract these muscles without moving their wings.

If there's no brood (as is often true in the coldest part of the winter), the cluster allows a wider range of temperature fluctuation of almost 20 degrees in either direction, but as the queen starts laying (after the winter solstice), the fluctuation isn't possible.  Mostly the interior cluster temperatures are maintained at 20 degrees C or 68 degrees F.

One of the interesting parts of hive mentality is that the hive responds as a unit to the cold temperature but in the process, each individual bee takes on her role, whether she is in the shell of the cluster (which is often several bees thick) or in the center, contracting her flight muscles.

So I hope for all of us that our bees are doing their jobs and having enough honey in reserve to maintain the energy level they need to keep iced over hives in Atlanta and elsewhere warm enough in the cluster to survive the winter.