Tales of the Top Bar Hives

On Saturday we checked Noah's top bar hive. There was lovely comb throughout the hive like the one in the frame above but all of it was empty - no honey to be seen. Bees were flying in and out so we felt like the hive had survived the winter so far, but no stores does not bode well.

Julia had a box of cut comb honey in the house, so she brought it out and put it in the hive. 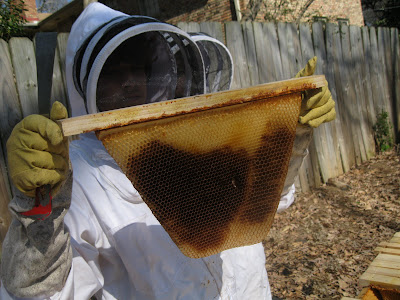 Suddenly we spotted the queen. She's at about 9:00 just above my shadow cast on the comb. 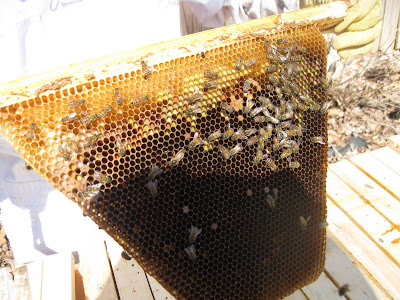 Here she is again. You can see that the hive has pollen but no honey. We didn't keep looking at the comb at the point when we saw her Majesty. Instead, we closed it up for another day. 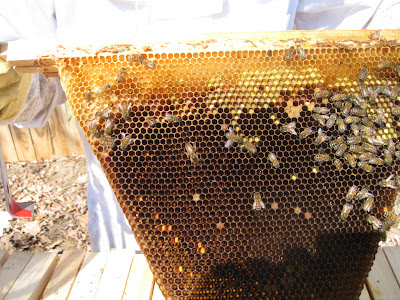 I feel reluctant in the first inspection after cold weather to break the propolis sealing the hive.  If the queen is dead, as she is not in Noah's hive, we can't replace her at this time of year anyway.

If we had looked deep enough into this hive to see the beginning of brood, it would be reassuring but doing so would not be worth compromising the safety of the hive as March's unpredictable cold/warm weather is upon us.

I visited my own top bar hive today at Valerie's.  This hive certainly has many fewer bees than went into winter. They also seemed a little disgruntled. So even though I didn't hear a queenless roar, I am concerned that they may be queenless.  Or maybe they just resented the intrusion. 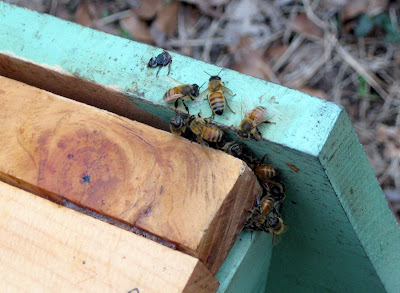 Here they are congregating at the entry. 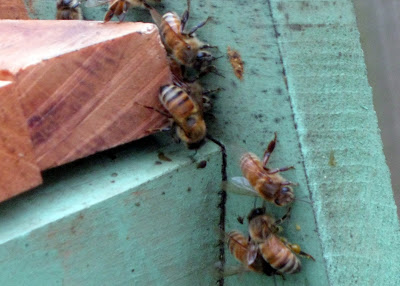 I could see the tiniest bit of pollen in the pollen basket on the bottom bee and felt a little relief.  Maybe there is a queen and some larvae that need feeding.  We'll see in the next inspection.
Despite opening a top bar and tearing off the wax covering over obvious stored honey, I still left them some comb honey in a box to let them know I was thinking of them and that there still is a beekeeper interested in them. 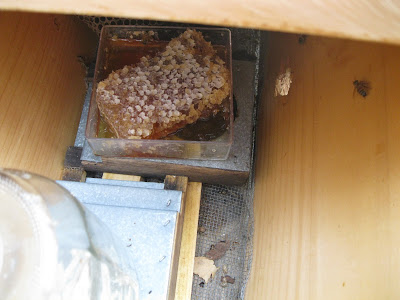