Today I was in Rabun County and the temperature was 52 degrees with bright sunshine. I thought the bees at the community garden might be flying if the hive survived the severe winter north Georgia has incurred.

I put my camera in the entrance to the hive and although the picture is out of focus, you can see lots and lots of dead bee bodies. Does this mean the hive is dead? Or does this mean that they haven't had a warm enough day to carry out the dead? 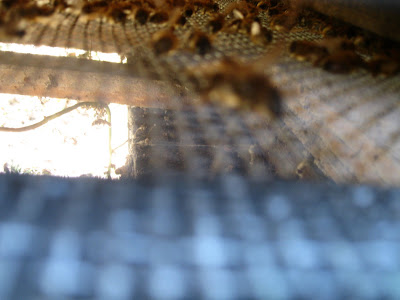 As I watched I saw at least 30 bees enter and exit the hive. Unlike my Blue Heron hive where the bees congregate on the landing and sort of fall all over each other in their winter exit from the hive, these bees came out hesitantly and one at a time.  Their behavior was a little like robber bees in that they paused at the entrance and didn't always go right in.

Then I thought about orientation. These bees have been inside all winter and perhaps are not oriented to their hive, leading to some amount of uncertainty at the entry. 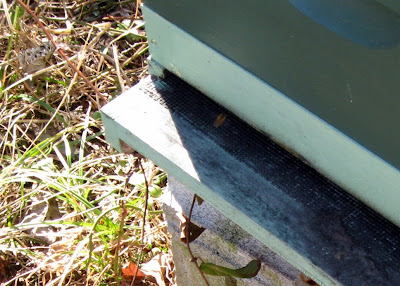 The good news is that all of the 30 bees except one entered and exited on the same side of the hive. As the sun shines on the hive, it is evident that, facing the hive, the left side is the warmest. I believe if there is a surviving cluster, they are located on the left (warmest) side of the hive.

Then the entrance and exits of all the bees from that side would imply that they are resident bees. All of the summer, I rarely saw the queen but the eggs were usually located on the second frame from that side of the hive and the bees tended to congregate on that side.

So this is my rationalization that there are live bees inside despite the bee bodies strewn on the screened bottom board. 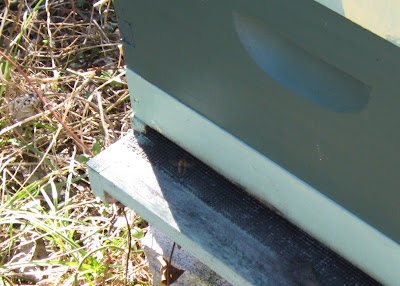 I have put in a request to the community garden that we have two hives there in 2011. It would make success so much more likely with the possibility of resources to balance and comparisons to be made about the state of the hives. I'm hoping they say yes to my suggestion. 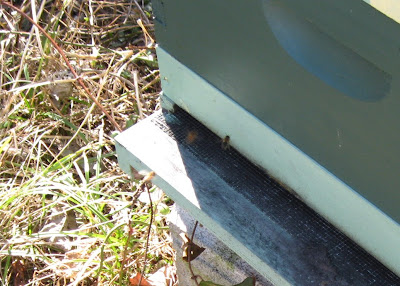 There is a feral hive located in the wall of the old unused school building nearby.  I walked over to see if the bees made it through the winter.  My picture below only shows one bee, but with a digital camera, I never get what I intend to snap.  I saw groups of at least six bees at a time leaving this hive.  So it's also possible that the bees flying into my hive near the garden are robbers from this hive.

The goop around the hive entry is from a beekeeper who did a trapout here about two years ago.  Obviously the hive is still going strong, but the queen rarely leaves in a trapout, so in addition to the queen, there must have been enough bees who didn't go into the trap to keep this hive going.  Or the trapout worked but a new swarm moved into the space.

However they made their arrival, this hive is alive and well and about a football field's length from the community garden hive. 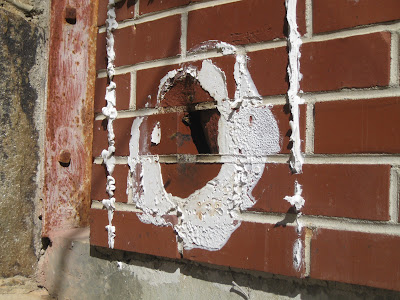