As the temperatures warm, many beekeepers are opening their hives to find that the hive is dead. The cause is frequently starvation.

Bees cannot move when the temperature is low - often they are immobile because it is too cold for their muscles to function. Honey can be plentiful in the hive and they will still die if the cluster is too small and the temperatures are too cold to move to the next spot where honey can be found in the hive.

We arrived at Blue Heron today (Julia, Noah and I) to find Peter, one of the other beekeepers there, looking at his dead hive. Here's what he found in the hive in the photo below. You can see the remaining bees all grouped together. They are dead and starved.

There is nothing left in his hive. The honey which was in the hive has either been consumed by the bees over the winter or robbed out by my hive, the only living hive at Blue Heron at the moment. 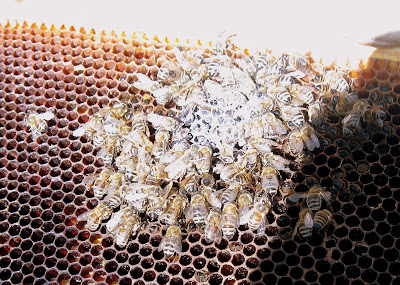 Here is a picture of starvation up close and personal. This is Julia's dead hive at Blue Heron. The bees die with their heads down in the bottom of the cells, usually with their probosis sticking out, as they lap up the very last drop of honey. 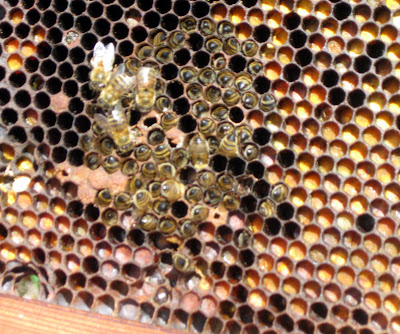 Here's an even closer look so that you can see how the bees are all head down together. There's plenty of pollen in this hive, as you can see on the right of the picture, but no honey.

Julia has ordered a new package for Blue Heron.  I have two nucs coming from Jennifer Berry and will put one of them here .  We'll have bees at Blue Heron this year, but Julia's hive and Peter/Kevin's hive are both dead as of today's inspection. 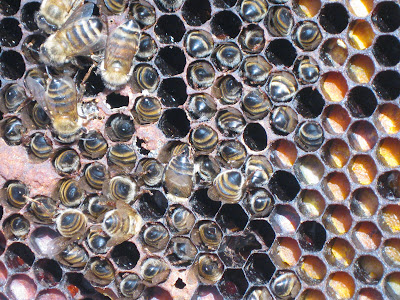 In a way, that will make life interesting.  We can compare a second year hive to a first year hive (if mine remains alive).  We also might use my hive to make a split which could be interesting.

My wish is that we get some honey from Blue Heron this year - I'd like to taste it and we're entering our third year at this preserve (and so far, no harvest!)  But we have learned a lot.  And Julia, Noah and I have become fast friends - can't beat that as an added value to the experiment of Blue Heron!