I am thrilled to report that this hive made it through the winter and is going great guns! There were lots of bees and lots of brood throughout the hive. They are healthy looking - I didn't see any Varroa and no other bad signs and they seemed nonplussed by my intrusion. 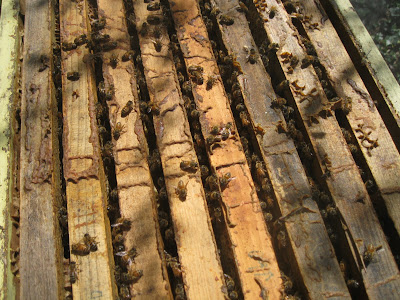 Next time I am going to take a tripod. I didn't get good pictures. I was by myself and didn't check the camera settings. The camera was still set on Kids and Pets from taking pictures of my grandchildren the day before. 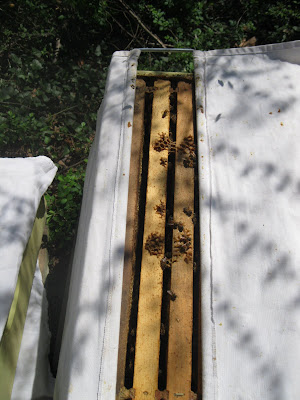 I used the purchased hive drape to cover the hive except for the frame I was removing. As you can see on the left in the above picture, I also draped the boxes I removed.

I was concerned about this hive because the bees were still in the bottom box after the winter with a solid box of honey above them. Often the queen will not cross a honey barrier like that and she is said to be honey-bound. I looked at the old capped brood in the bottom box. All but the outside two frames were being used for brood. One frame had a perfect football shaped pattern, all the center had emerged and new eggs and larvae now occupied the space.

I took off the second box - it's full of honey and the comb is often cross-combed with two frames joined by comb between them. The honey in that box is all composed of "bee tea" syrup driven honey so it is only good for bee food. I took the box off of the hive and set it aside to decide what to do with it.

I was so surprised to find that Box three contained lots of beautifully drawn comb and new capped brood as well as young larvae and eggs. I didn't see a queen cell anywhere, nor any drones. In this third box, however, I did see some drone brood (see the picture below). 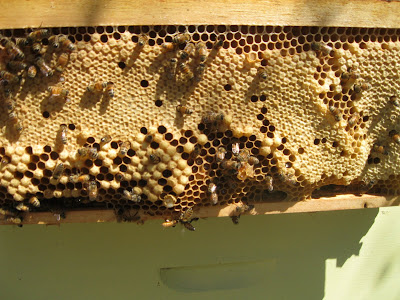 And then I saw her. I so regret that bad picture - I took THREE bad pictures! Anyway, I outlined this absolutely gorgeous queen so you could see her. She was large and long with an all golden abdomen. If you click on the photo below, you can see that I've outlined her in red.

Right in front of me, she lowered her abdomen and laid an egg....privacy notwithstanding. She was beautiful and brave - she had crossed the honey barrier to continue her egg laying in the box above it where there was space for the taking. 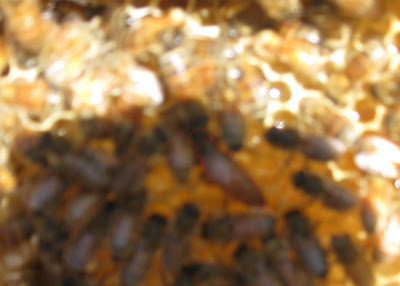 Every frame in every box was being used so I added a fourth box of foundationless frames. I actually put it in position 3. I took a frame of nectar from the side of Box 2 and put it in the middle of Box 3 (the new box) to help the bees know how to build the comb in the frames.

I replaced that frame in Box 2 with a foundationless frame.  I also marked all the frames as per Housel positioning.

Julia is inspecting this hive on Saturday and we'll see if they have built any comb out by then.

I then decided to put the honey barrier box on as Box 4 and wrote on it in magic marker "Bee Tea Honey" and "Cross Comb". I will not harvest this honey for eating because of the bee tea. If the bees don't use it, I'll probably collect it and feed it back to the bees so that I can make use of the honey and straighten out the cross comb.

And now I'm going to enter my adventure on Hive Tracks and go to the kitchen and wash my hive tool which is gunked with propolis as often happens in the first inspection.