After we picked up bees last weekend, Julia and I went over to her house to inspect her big hive, Poppy. The hive was thriving. We saw lovely brood in the top boxes. 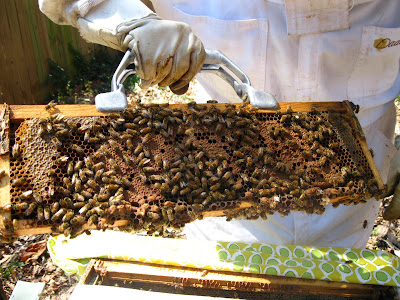 We saw her majesty and she allowed a photo opp! (I am so glad to get a really good picture of her!) 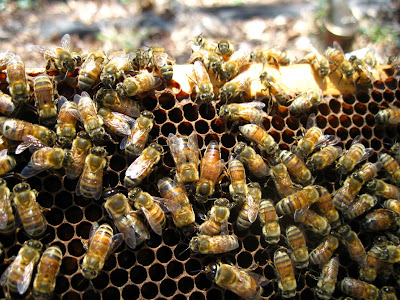 Julia's other hive was quiet. Only a few bees went across the threshold while we worked on Poppy. When we finished Poppy, we opened the hive (called Leslie's hive),and found only enough bees to cover a frame or so and we didn't see brood, to speak of.

As we examined the frames we discovered cells with several eggs in each cell. This is a clear sign of a laying worker.

See the eggs in the cells below? They don't stand as upright as when the queen lays them and several cells have more than one egg in them. 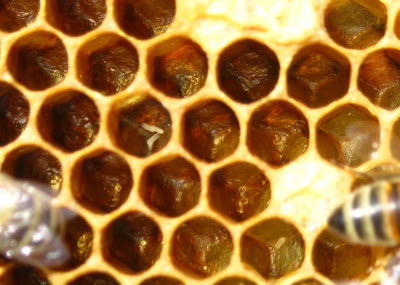 The old way of thinking says that if the queen is alive and active in a hive, her pheromone production serves to suppress the hormones of the workers. All the workers are fully developed females but they have not been fertilized. Consequently a worker is only capable of laying drone brood.

However, without the pheromone of the queen, the survival instinct of the hive would inspire a worker or workers to begin becoming "productive" at least as much as they can without fertilization females.

However in the Wisdom of the Hive, Seeley says that it is now "clear that the pheromones that provide the proximate stimulus for workers to refrain from laying eggs come mainly from the brood, not from the queen." (Seeley, Wisdom of the Hive, 1995, p. 11) This determination came from Seeley's own study in 1985 and one by Willis Winston, and Slessor in 1990.

Seeley also writes that in a queenright colony, the worker bees police the worker-laid eggs, destroying them when they find them. Isn't that interesting. From a Darwinian point of view, it is for survival of the fittest, but too complex to go into here.

Julia brought the frame in and took the photo below of the frame with no bees on it so we could better see the multiple eggs. 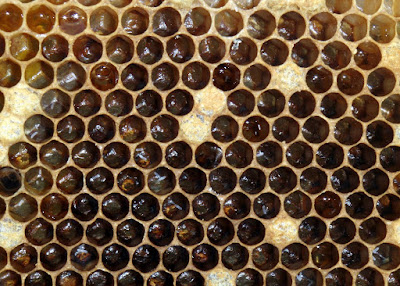 Email ThisBlogThis!Share to TwitterShare to FacebookShare to Pinterest
at 11:00 PM
Labels: laying worker