Observations about the Wax Tube Fastener

After using the wax tube fastener (which came with no directions) for a few years, I am learning some additional helpful hints and want to pass them on to you. If you want to see my original wax tube fastener saga, you can find it here.

Today we waxed strips into 65 frames for the hives in South Georgia.  To do that many takes a lot of wax.  I melted the wax in my converted Presto Pot that I bought on EBay.

However, as we worked through the 65 frames, we had to refill the can several times.  As the hot wax level lowered in the can, it was no longer high enough to fill the wax tube fastener completely with wax.  The consequence of this was that the wax residue in the upper part of the tube near the handle solidified, interrupting the vacuum created when you cover the invisible hole on the black handle.

You can see in the photo below from the wax residue on the outside of the asparagus can that the molten wax was about half way up the pipe end of the WTF. 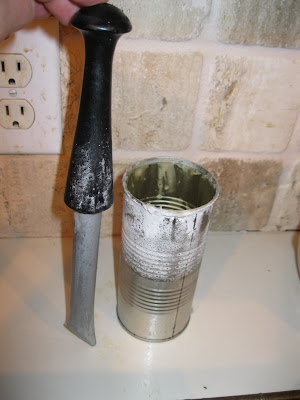 To combat this problem, I had two pans of boiling water going on the stove while we worked.  One pan was simply boiling water.  The other heated water contained the filled asparagus can with the wax tube fastener inside the can.

I refilled the can every time it got to about this depth (see photo below).  Because at this point the WTF was not functioning well since the vacuum had been disrupted, while I refilled the asparagus can, I put the WTF in the other pan of boiling water.  This served to melt the wax in the pipe so that the flow could start again.  I lifted the WTF out of the boiling water and allowed every drop to flow out of it before returning it to the melted wax in the can.

This process was much less frustrating than having the tube suddenly appear to quit working.  I also kept a toothpick around to run in and out of the hole in the handle occasionally to keep that path clear as well. 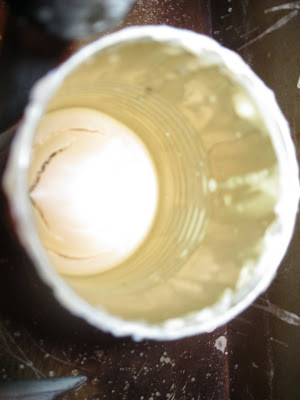 My parents grew up in the Depression and instilled in me an approach of "Waste not, want not," so I didn't want to lose any of this precious wax.  It's all I have and when it's gone then I'll have to figure out another way to stick the wax starter strips in the frame grooves.


Meanwhile in the roasting pan that I used to hold the frames I was waxing, I line the bottom with a piece of waxed paper.  We, of course, dripped wax all over the waxed paper.  When the job was done, I put the paper lining, covered with wax drippings, into the freezer.

After an hour in the freezer, the wax dripping just popped off the paper.  I put the peeled and popped off wax into the Presto Pot for future melted wax needs.  I always let the wax cool in the pot, ready to be remelted for the next waxing occasion. 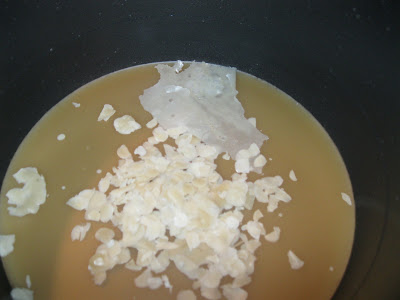 And from the Depression era thinking, I am now letting the water cool in both pans from the stove.  In the morning, I'll peel the cooled wax off of the top of the water and add that to my wax collection.