Wings and the Bee

Today on Beemaster there is a discussion of k-wing virus in the bees.   When we open our hives in the spring, we are first hoping to find the hive alive.  If it's not alive or struggling, then the beekeeper wants to know what's wrong.

A hive may have starved to death.  Frequently this is why a hive has died.  The bees got too cold and the cluster could not move to where the honey was stored.

A struggling hive may have bees with various diseases.  The k-wing virus refers to a viral caused problem with the bee's wings.  The bee wing is made in two sections which are held together with hamuli (tiny hooks).  When a bee is infected with k-wing, the hamuli no longer hold the two wing sections together and the wing looks like the letter "K"  Below is a picture I found on the Internet taken by Danny Jensen: 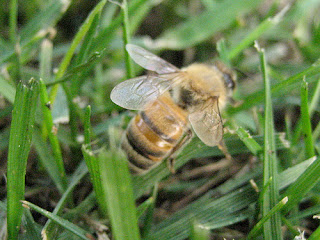 You can see that the bee's wings are not connected.  This is a bee that cannot fly.

I've had examples in my own hives in other years, but couldn't find a picture as good as this one.

You also may find bees with deformed wing virus.  The bee emerges with shriveled, useless wings.  This is a different disease from k-wing and looks like this: 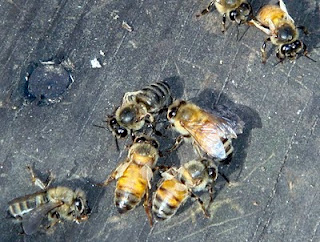 Being able to fly is essential to the community of the beehive.  If the bees are unable to fly, they are useless to the hive and the hive will fail to thrive.

In the normal life of the bee, the wings are essential for survival.  Old bees have ragged tips on their wings and seeing a bee with such wings on a flower in the summer, lets the observer know that she is almost at the end of her useful life.

Randy Oliver has an interesting article on "Old Bees"  in which he notes that the bees have a 500 mile warranty on their wings.  They wear out at about that point on average and the bee's useful life is then over.  So even if they aren't impaired with disease as in the photos above, when the foraging bee has flown her 500 miles, she's done.