Honey, Brood and A New Aid for Ventilation

In checking on my hives at home today, I was quite pleased with my bees.

I hate it when in the process of lifting a comb, despite my best efforts, some comb is broken open. Of course when that happens, it is always fascinating to see the bees surround the honey drips and put their proboscis to work sucking the honey back up as you can see in the picture below of the Colony Square bees working hard to retrieve spilled honey. 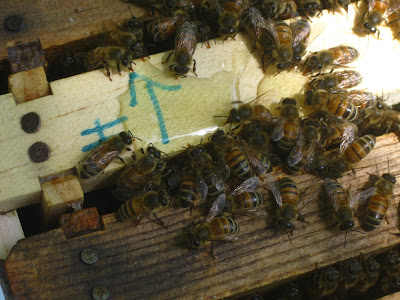 This curious frame in Colony Square was filled with nectar and right in the center there was capped brood??? 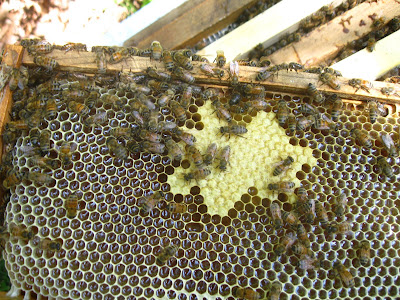 The queen in this hive has been laying like crazy. Generally in the life of the hive, the queen builds up the population until the summer solstice at which point she gradually begins to slow down and continues the slow down until winter. 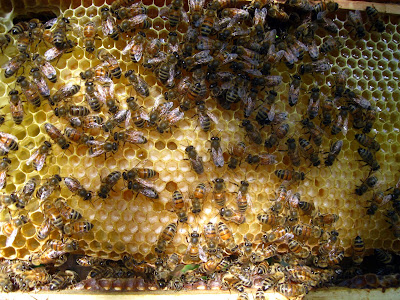 At Penny (my Virginia mentor's) suggestion, I am trying to increase ventilation in the hive by putting bottle caps at the corners of the inner covers. I wondered before I did this how the tops would stay in place, but I think I was imagining placing them on the corners of the hive box. Once I realized they would go on the tops of the inner cover corners (duh!), it's clear that they would easily stay put. 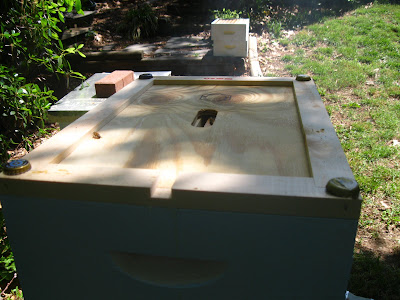 Lenox Pointe was doing well too. I didn't take pictures while in that hive, except for the one below, showing a beautiful frame of brood.
The bees in both of these hives are bringing in nectar as fast as they can. We are at the height of the nectar flow in Atlanta so it's prime time for the hives to be building up their honey supplies. 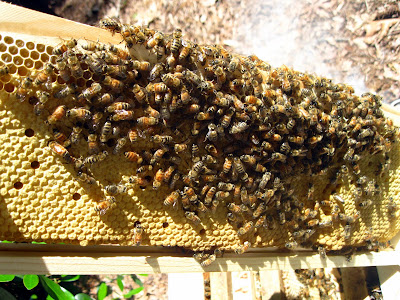 I put bottle caps on Lenox Pointe's corners as well. My son-in-law, Kevin, has been collecting bottle caps for me so I am now carrying a baggie of bottle caps in my hive inspection kit. 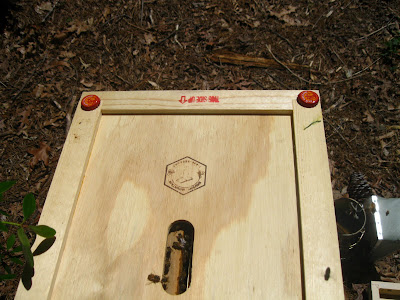 Email ThisBlogThis!Share to TwitterShare to FacebookShare to Pinterest
at 12:00 AM
Labels: hive ventilation, honey