Thanks to blog reader, Tom, in southeast Pennsylvania, I've learned why sometimes my bees start the comb in a foundationless frame at the bottom.

I opened Lenox Pointe the other day and found no comb in the newest box that has been on the hive for a week. In one frame the bees had built small attempts at comb from the bottom up on the bottom bar of the frame.  We had a frame like this at Blue Heron in a box last year that the bees never touched beyond the small attempt on the frame bottom bar. 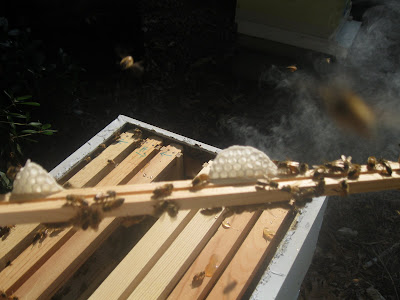 Many people have written on Beesource and other places that the bees actually build down, not up, as we have all been told.

deknow from Beeuntoothers writes:"the common beekeeping wisdom is that the bees, if they can, like to work their way upwards....adding brood boxes and supers is generally done above what is already established, so that the bees can "work up".

think of what a swarm will do when the occupy a cavity. the START at the top, and WORK DOWN. it would take very specific circumstances for a colony to build a bunch of comb, and then build comb ABOVE it.

bees (when working without foundation), cluster at the top and build all the comb down. if you place a box of foundationless above the existing comb (with no bait comb or foundation), the cluster tends to stay on the established combs, and starts to build upwards from the bottom bars of the new box. the results are fairly predictable....a big mess (as far as the beekeeper is concerned).

when i bait the bees up, i try to use 3 frames of bait comb (with brood) so that the bees not only have comb to be on, but beespace between the combs to be in. three combs can hold a goodly number of bees, and can make expanding outwards into the rest of the box much easier (for the beekeeper, and presumably, the bees as well).

it may be that adding the new box on the BOTTOM is a better plan, and might not require bait comb. certainly, it more closely replicates what the bees do, which is to START at the top, and work their way down."


Also think in terms of a pyramid: you want brood toward the center and more in the bottom box than in the top box, but some in each."
So we need to be sure the bees have a ladder to climb up and work in the new box.
Deknow also says:
"if you place an EMPTY box (all foundationless frames) on top of an established hive, the cluster will stay on the established comb (below) where their brood and foodstores are.

so, they will start building comb "up" from the established comb...which will end up as a mess.

the "ladder" need not be more than a frame with foundation or comb (i like to use 3 combs...this gives more space "between combs" for the bees to populate). this gives the bees a way to "move up" without drawing crazy comb, and eventually, they will use the ladder comb (or build out the "ladder foundation"), and then start building comb on the foundationless frames from the top (as it should be)."

I've always known to put a frame with a full sheet of foundation in it or a drawn comb in each box of foundationless frames but I thought I was doing that to help the bees know how to draw the comb straight.  While it may help the bees to have a model for building straight comb, the bees appear to find it easier to BEGIN drawing comb in the box with the help of a ladder to get them started at the top of the frame.


Giving the bees a ladder eases their comb building from the top down.


Some of my recent new boxes on hives do not have that ladder.  I may have given them a frame of drawn comb but not the ladder, the continuation of the work of the hive, by moving frames of brood or honey from a filled box into the new box of foundationless frames.
Today I set out to do just that.  Here you can see a frame I moved into the empty top box on Colony Square. 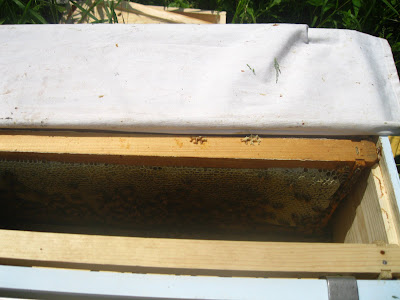 With a ladder the bees are glad to fill the frames with comb, but without it, they may not move into the new box. 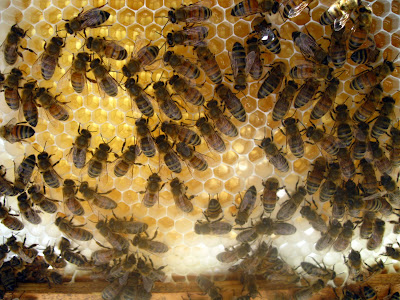 I want them to build comb like the comb below, so I'm focused on giving bees ladders going forward. 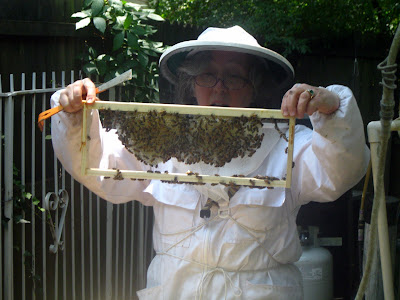