Mixed Bee News from the Farm

We went down to the farm about three weeks ago to find all the bees starving. The area hasn't had rain in two months - actually since the tornado in late April. Nothing is growing in the woods, in the fields, nothing. So the bees were in terrible shape.

We put food on all the hives except one - the only one with substantial honey in several supers. None of us live down there and I came back worrying about the bees. After they ran through the feed, they would be in the same shape as before - no resources, no stores. Greg has no irrigation system on his farm so he can't plant without rain. The only dependable bee crop in the county appears to be cotton and it doesn't bloom until August.

When we came back to Atlanta I talked to the guys and we decided to bring most of the hives back to Atlanta. At least here we can keep an eye on them and keep them thriving instead of living on a desert as they were in Taylor county.

Jeff and I drove down and back last Saturday. We loaded up hives and equipment into two cars and drove back to Atlanta. It would have been fine, but Interstate 75 is under construction and a trip back that should have happened in two hours took four and a half! We were ready to scream. 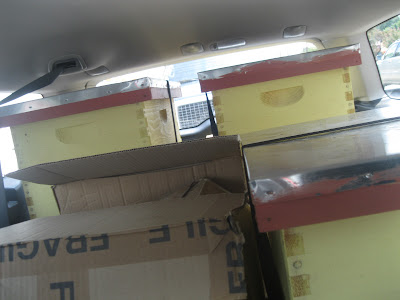 We installed three of the hives in the backyard of my new house where I will move on July 15. I'm there almost every day and can keep an eye on the bees.

The rest of the farm hives are in the backyard of my soon-to-be old house where Jeff and Valerie will be living. So there are five farm hives in Atlanta - two at my old house and three at my new house. We had done some combining of weak hives with strong ones, so we left two hives at the farm....the one that had been doing well and another that seemed in OK shape. Greg goes down every other weekend and he can mind them.

So today I opened all five hives to see how they were doing. All of them have been flying well and seem happy.

The first hive in my old-house yard had a huge tree branch fall on it in a storm on Friday night. I was worried that all would be a mess in the hive. However, they were doing fine. 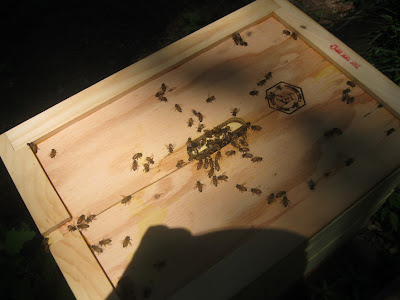 The queen had been laying and the bees were calm. I only looked at a couple of frames, reasoning that these hives have been through a lot.  I just wanted evidence in each hive that the queen was alive and laying. 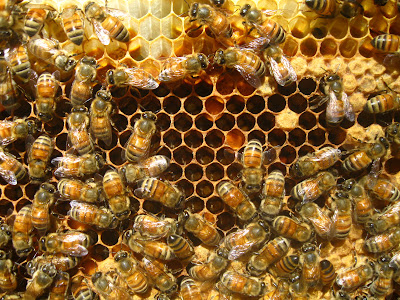 The other hive at my old-house yard is the swarm hive we captured in Dallas, GA. The brood pattern in it was great and I saw eggs on both frames I looked at. 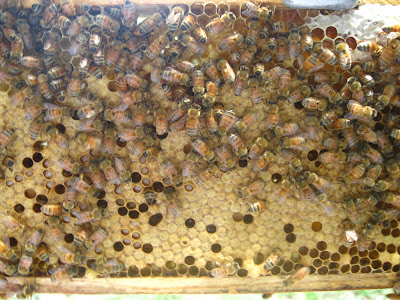 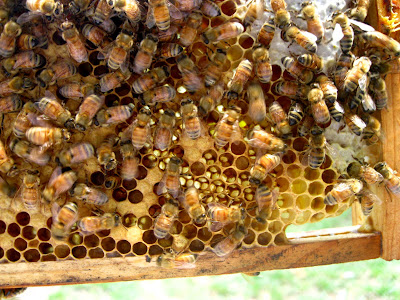 At my new house, the bees were quite happy. I saw eggs in every hive, which relieved my worries that the queens may not have traveled safely....or been happy with the journey (I certainly wasn't). You know how when there are bees in the car, they usually go to the back window? Well, sitting so still on I-75 that the speedometer didn't register movement for several hours resulted in loose bees right by my driver's side window. Not the most pleasant trip for me.

You can see tiny c-shaped larvae in these cells. 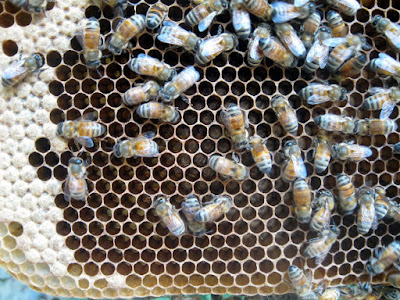 You can see eggs in these. 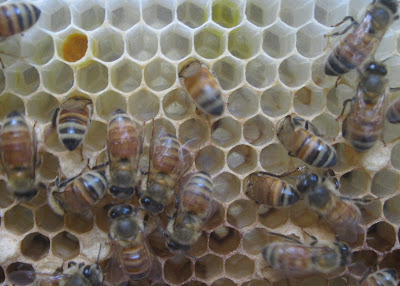 I had to increase the contrast (our bees don't begin to be this dark) so you could see the eggs in this hive. 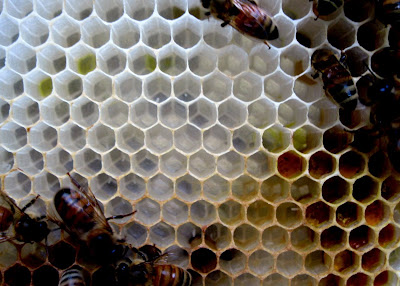 And in the last hive, there were brood, larvae and eggs all on this one frame. 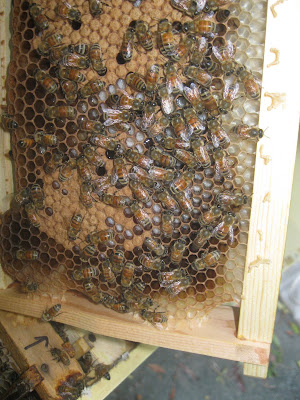 I also met my next door neighbor who looked over the wall at me and my veil and smoker. He seemed nonplused by the fact that a beekeeper had moved in next door and asked if he would get to taste the honey! 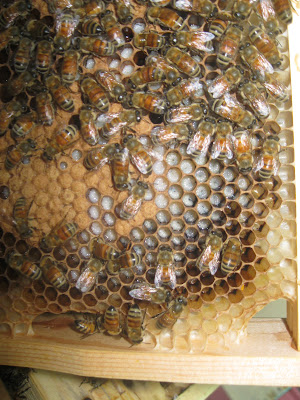