Lots of moving is going on in my life. I've moved out of my house that I lived in for 13 years; moved to a smaller intown house in Atlanta; my daughter and Jeff, my son-in-law, are moving into my old house and they are renting out their house which is where Topsy has been located.

So among the many changes, Topsy can't stay in the backyard of a house that will be rented.

On Sunday, Jeff and I split Topsy into two hives with the plan of moving the split to my new house. It was hard and made difficult by the fact that the honey comb has been cross-combed for the summer and we haven't been able to get the bees to draw straight comb in there. 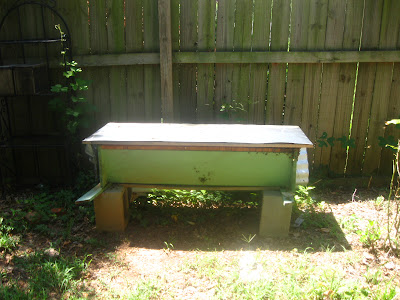 It's hot in Atlanta so they are bearding both down here at the entry to the hive and under the top board. This is a huge hive with lots of bees. 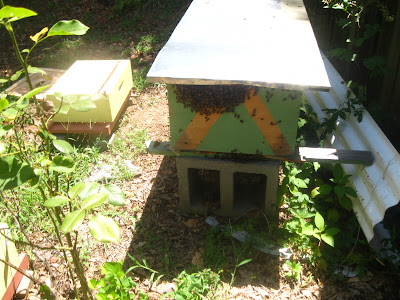 We took out the brood frames first. We propped up the top bar and examined each comb to determine how to divide it up because we were rubber-banding the comb into Langstroth frames. 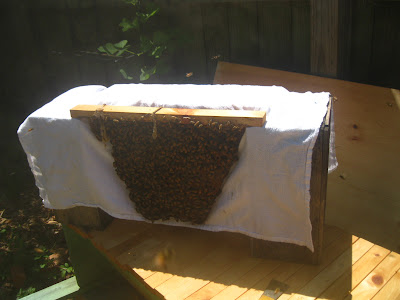 We were as careful as we could be and rubber banded the comb into frames, fitting it as best we could. 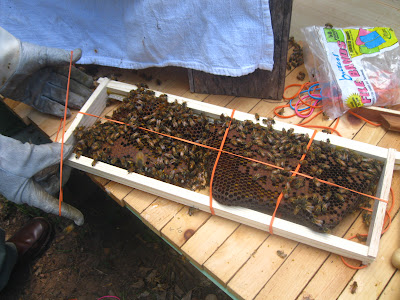 Here's a look down into the hive before I quit taking pictures. When we got to the honey-filled combs, everything got sticky and taking photos wasn't happening after that. 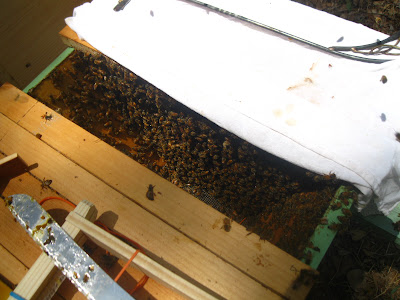 The brood comb was straight and beautiful and we carefully cut each comb to fit the frame, trying to save the most brood and eggs possible. 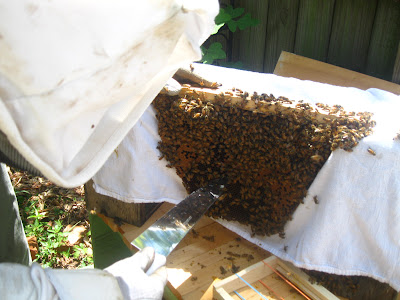 The honeycomb part was a complete mess, but we managed to get them some saved comb and I put some of the comb into a filter bucket to drip through to feed it back to them. 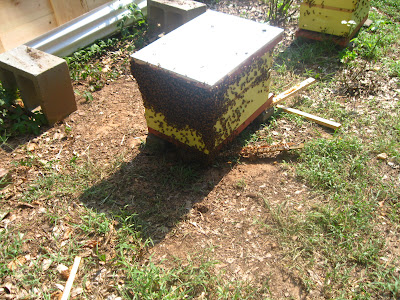 There were so many bees that we ended up putting on three boxes for them and putting a hive top feeder of their own honey above the inner cover. 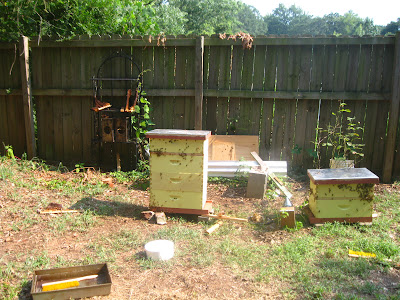 There were so many bees on the outside of the hive that we propped the top despite the notched inner cover to allow them a top entry. Both Jeff and I felt a little defeated by the daunting task of trying to split this hive and weren't sure how it would turn out. We decided to leave them for this week in the new hive and move them on Saturday night when I get home from vacation. 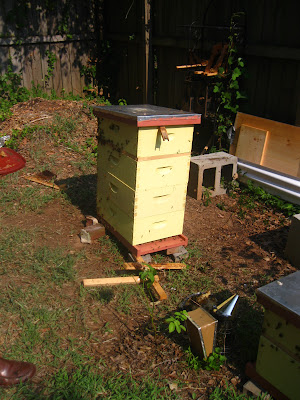 So I'm at the beach with my family and Jeff, who stayed in Atlanta, called to tell me the split hive had absconded and are hanging in a tree behind his fence. 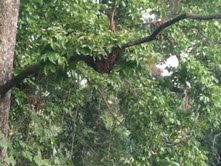 My super swarm catcher tool is locked in my new house and these bees are about 20 feet up a tree.  Jeff is going to try to get them tomorrow, but it's not going to be easy.  I'll let you know how it all comes out.

I'm very sad about all of this.  I put a lot of energy into this top bar hive and haven't done well with it.  Also this is the third split I've made this year that has not succeeded.  So I'm not too optimistic that he will capture the swarm and that we will keep these bees.

Tonight Jeff is moving the hive boxes to my new house and if he can capture the absconded hive tomorrow, he'll install them at my house where there are three other bee hives.  He's picking up the pole for my swarm catcher which is still at my old house and is going to get a large water cooler bottle from Home Depot to try to use on the end of it, since the water cooler bottle is locked in the basement of my new house.

Email ThisBlogThis!Share to TwitterShare to FacebookShare to Pinterest
at 11:57 PM
Labels: inspecting the top bar, splits