I started to call this "Checking on the Farm Hives" but they aren't on the farm any longer, so I decided just to call this group of hives Linda T's Bees since that's the name of our business.  Three of the hives are in my backyard, so this week Jeff and I did an inspection.  We haven't opened these hives in several weeks.

The first thing that caught our eye were small hive beetles.  The disadvantage of opening a hive at this time of year is that the bees in a strong hive keep the small hive beetles corralled at the top of the hive, but breaking the  propolis seal and lifting off the top cover makes the hive vulnerable to beetle invasion.

Jeff and I smashed and smashed with both ends of our hive tools, leaving beetles dead on the top cover.  The bees went after them too so we were challenged not to smash bees in our enthusiasm for killing beetles!

I drew in red on the photo so you couldn't miss them.....they're everywhere, they're everywhere.  We actually saw a sizable number of beetles in all three hives, sending me off to buy sandwich boxes to make Sonny-Mel traps to put on after the rain stops on Wednesday. 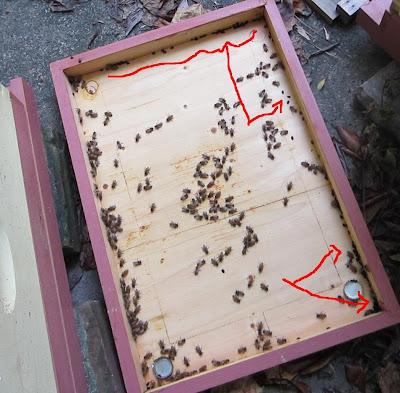 We saw evidence of the queen in every hive.  Larvae in all stages were evident and in the spotty brood patterns, the holes were filled with young larvae. 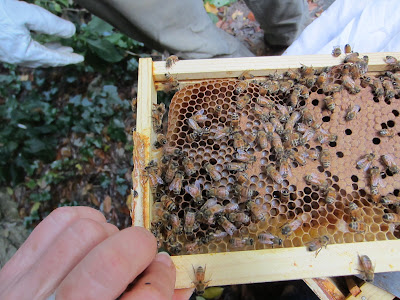 However all three hives were very light on stores and we determined that bee tea will be necessary in the next week or so to get them going OK into winter.  We do not want to lose these hives over the winter. 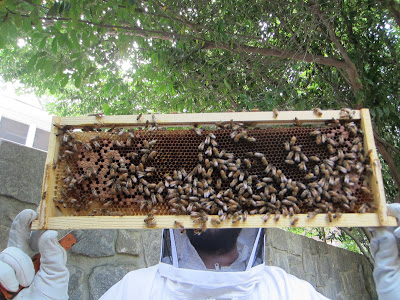 The hives at my house are in the shade which probably increases the likelihood of SHB, but it is shady in my backyard - so shady that I can only use the solar wax melter in the front of the house. 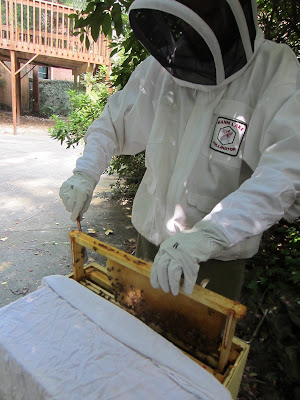 We used hive drapes throughout this inspection and neither of us got stung.  The bees seemed quite calm.  Well, now we'll get to work making SHB traps and bee tea for the next installment of this tale. 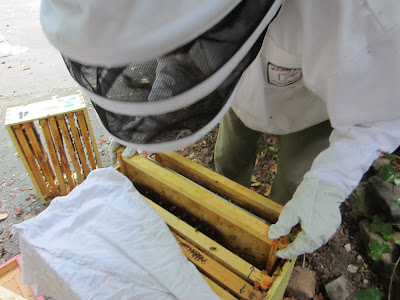