Over last weekend, Julia called me from the Blue Heron with the sad news that she opened her hive and found it dead. The terrible vandal left it open to inclement weather, the bees had probably lost or balled their queen after that, and the hive had dwindled down to nothing. Very, very few bees were left in her hive and there was brood that needed to be capped and had died since the larvae was never capped. Very sad situation.

Julia had taken honey to feed her hive. My hive did not need food, so she left the honey on a cinder block with slits in the baggie for any takers. When I arrived to check my hive, there were bees enjoying the honey. 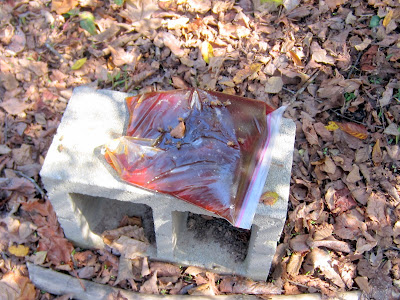 Here are Julia's hive boxes, now empty. We will scorch the insides for safety but the cause of death for this hive was mistreatment and exposure. 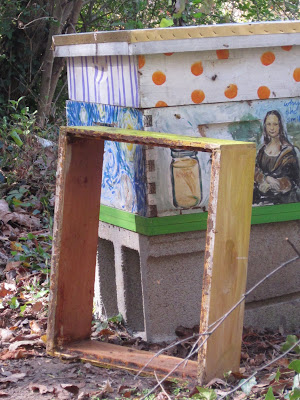 You can see bees on the landing of my nuc hive. The bees were flying in and out. I did see a few with pollen in their pollen baskets which was hopeful for the hive as a whole. 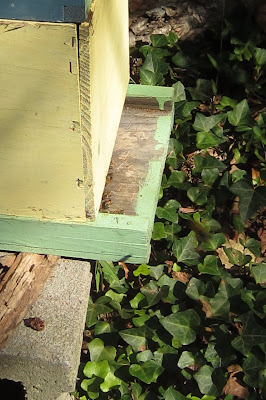 When I opened the hive, they had not emptied the jars of bee tea - when you have honey available why would you want bee tea? In addition the asters are still blooming profusely in the fields around the apiary. 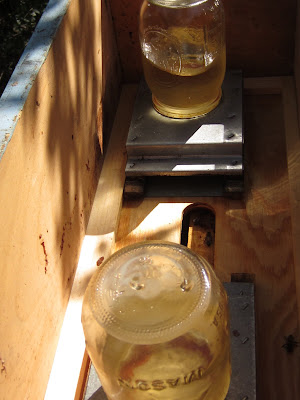 I left them with the half empty jars and will check on them again this coming week.

Email ThisBlogThis!Share to TwitterShare to FacebookShare to Pinterest
at 10:45 PM
Labels: Blue Heron, feeding bees, overwintering in a nuc, vandals