Today, suited to the max, Jeff and I returned to Colony Square. The temperature was in the high 60s and tomorrow is going to be another summer day in February, so it's time to make a split from this colony. I brought a nuc (actually I brought two but we decide only to make one today), and all the extra gear I needed: screened wire to block the entrance, bungee cords to hold the nuc to its bottom board in the car, wire cutters to cut the wire to fit, lots of smoker fuel (read: a full bucket of pine straw), an extra bee suit and veil for Jeff, lots of stuff.

I stopped at Blue Heron on the way and it's pretty good bet that the nuc there has died. I took off the top and found no bees in the top nuc box. There were some bees in the bottom box, but it's a pretty good assumption that they are marauders from another hive.

At Jeff and Valerie's, it was a different story. The bees were flying actively in and out of all the hives when I arrived. Colony Square being the largest was the most active. 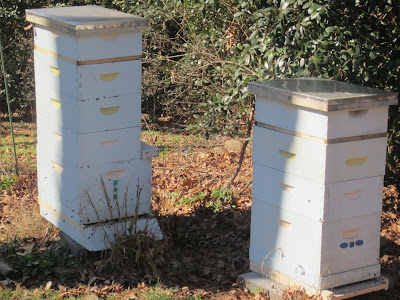 However, even the swarm hive had a bee flying in with pollen on her legs (in photo below). This isn't a guarantee of brood, but we put a frame of brood and eggs in there last week, so maybe, maybe, maybe they are working on a queen. We left this hive alone. Five Alive sported a crowded entry with bees landing laden with pollen. And Lenox Pointe was chugging along as well. 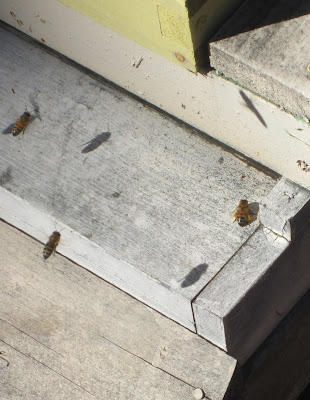 I didn't take photos while we worked, but we agreed on several things before we started.

1. I've not done well with splits - mostly because I'm always so worried about accidentally taking the queen that I don't take enough bees with the split. To do this split, we decided that it didn't matter if we took the queen. Should that happen, we would interrupt the brood cycle at Colony Square. With the extremely warm winter we have had, this year should be an overwhelming varroa mite year, so interrupting the brood cycle at CS couldn't be all bad. And if we didn't take the queen, the colony will keep growing as it has.

2. We would only take the eggs and brood from the first box on the top of the hive. Well, the first (top) box on the hive was solid honey and very heavy, but the box under that would be our source of eggs and brood. We didn't want to disrupt this hive any more than we had to, given our last week's experience.

3. We thought through all our steps ahead of time.
We set up both nucs;
We removed the replacement frames I had in the nucs;
We set the tops on the ground;
We put the bungee cords under the hives, ready to fasten;
We measured and inserted the screened wire in the entry openings.

Then we opened the hive and removed the top honey medium. We used lots of smoke and hive drapes.

We draped the first brood box without removing it from the hive. We pulled frames and found brood and eggs in frames 2 and 3. Frame 4 was one of the empties we had checkerboarded and it was not yet being used. All told we removed three frames of brood and eggs, one frame of solid honey and one frame of honey, pollen and a little brood.

The replacement frames that we put back in the hive were all drawn comb from my hives at home. 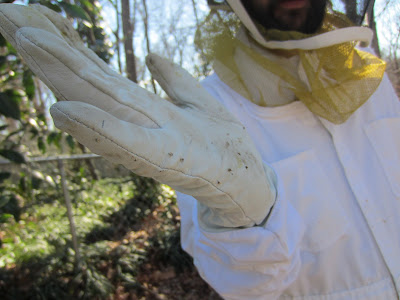 By now the bees were not happy. Jeff got many stingers in his glove as you can see and got stung once through the glove.

At that point we decided that we would only take one nuc's worth of split today and consider doing it again in the next couple of weeks. We loaded the nuc into my car. 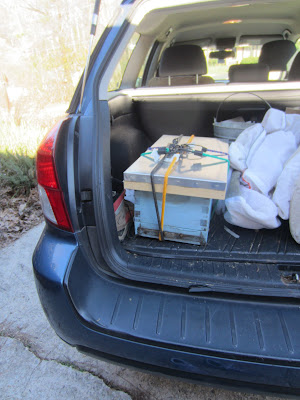 Meanwhile I had set up a bottom board and a slatted rack at my house, waiting for the arrival of this nuc. It was late in the day and I had a meeting of people coming to my house at 5:00 so I will wait until tomorrow to move them into a hive box of their very own. For now they will spend the night in the nuc. 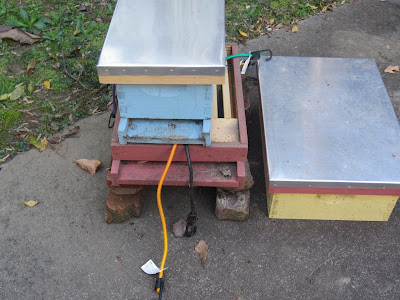 The hive box beside them is all set up with frames and ready for the bees tomorrow. Meanwhile it was reassuring to see the bees at the entry of the hive. I'll also remove all the bungees from under the hive tomorrow. I hope they make a good queen! And that they succeed at making a queen! 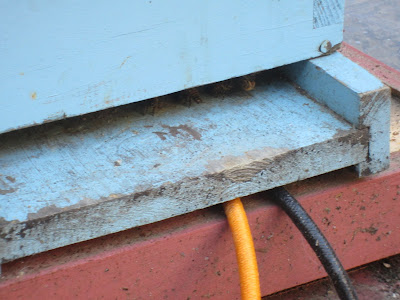 Tomorrow I'll move them into the hive box and probably feed them to help them draw comb.

Email ThisBlogThis!Share to TwitterShare to FacebookShare to Pinterest
at 11:00 PM
Labels: splits, walk away split