Yesterday I taught Hive Manipulation at the Tara Beekeepers' Short Course in the morning. In the afternoon it was warm enough to open my hives at my old house and I have been so anxious to see how they are doing.

Five was ALIVE!
(I loved this movie when my kids were young).

The first sign that Five was alive was this bee with full pollen baskets entering the hive. Bees laden with pollen don't come in to rob out a hive. 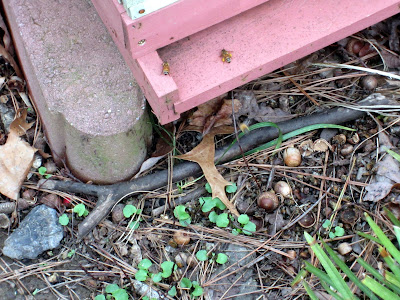 I saw another who missed the entrance and was on a stick on the ground. 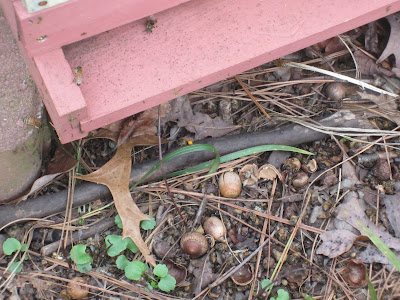 Inside there were lots of bees. This is the bottom box but the one above had bees as well. 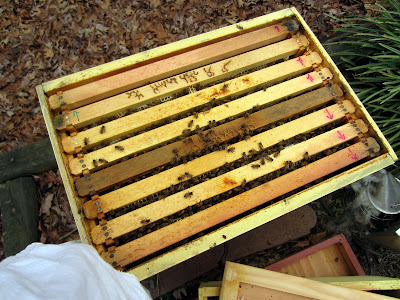 Here we can see signs of a laying queen - brood and eggs. I was so thrilled with this - so much more fun than opening up my dead-outs at home. Oh, and BTW, I saw drones (at least 10 in this small hive) and some drone brood. 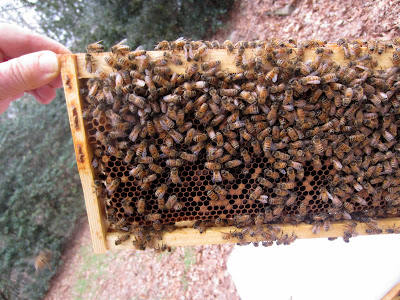 Inside the swarm hive I found a different story. Three full boxes of honey, no brood and just a baseball sized group of bees….but there was no sign of a queen. I felt impressed that these girls had made it through the winter and had not been robbed out by a larger hive. I thought I would take a good frame of brood and eggs from both Lenox Pointe or Colony Square and give it to this hive to see how they would do.

Really the smarter decision would be to combine this hive with Five Alive and maybe I'll do that next weekend. 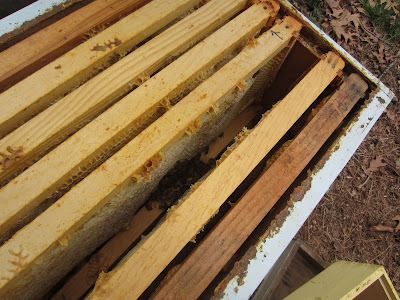 Lenox Pointe has had less bee traffic than I would like to see, but they had brood and eggs in the bottom box. I couldn't move this frame to the Swarm hive because it's a deep and the swarm hive is in all mediums. Here is a strong argument for uniform frame size, but I started Lenox Pointe from a Jennifer Berry nuc last year and it was established in a deep, as a result.

They had good honey stores, as well. This hive is going to be fine.  I did take a frame of brood and eggs from their Box #2 and put it into the swarm hive.  My plan was also to take one from Colony Square. 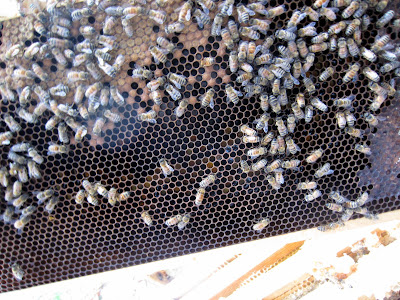 Then I opened Colony Square. I didn't take many pictures and the ones I took were blurry. It was filled with bees. There are as many bees in that hive now as in its strongest day last summer and it was a powerful hive then. Jeff was helping me and he called out the pollen colors he saw coming into the hive:  red, orange, yellow.

As we lifted the top solidly filled with honey box off of the hive, we uncapped drone brood that they had put between the boxes. The bees were hopping mad. 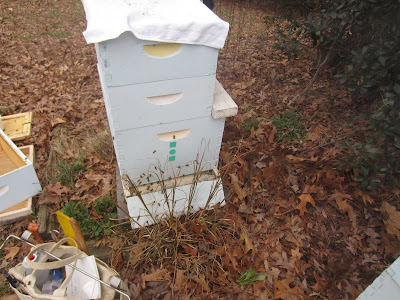 I had on a veil and jacket. I also had on gloves because my hands were stung in the swarm hive (queenless and angry with my intrusion).  Jeff just had on a jacket and veil as well. He helped me lift off the second box (also heavy but with brood as well as honey), and again we tore up drone brood between the boxes.   Jeff had company who came to see the new grand baby, and wasn't expecting to work the bees with me, so I encouraged him to go be with his guests.

Meanwhile I was using hive drapes and smoke but these bees were so unhappy. Suddenly I realized at least three were inside my veil. I walked away from the hive and killed at least one of the bees inside the veil by pinching her, but not before I had been stung three times.

Why didn't I just stop the inspection?

This was a day when I could work the bees, the temperature was finally right, and the drone brood between the frames pointed to a need for space. These bees are going to swarm unless I really work hard to keep them contained and I knew one way would be to checkerboard the brood box to expand the brood space.

So….I put on my Golden Bee suit - just happened to have it in the car. My friend Julia had been using it until she got one of her own and had conveniently just returned it to me. I think I'll keep it in the car on bee visits!

I took a new box with a few drawn frames and some strip frames and went back to Colony Square,  waiting for me, draped but angry. The bottom deep had brood in it, but I needed to do this with medium boxes. The next box (#2) had brood as well, so I checkerboarded it with the new box I brought with me.

I completely forgot about the swarm hive and did not pull a frame of brood and eggs for it. 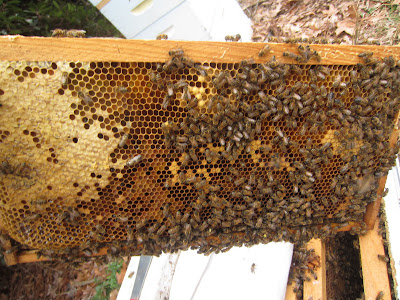 You can only do this if the hive has enough nurse bees to keep the brood warm and this hive is bursting at the seams...so no problem there.  Next Sunday, if the weather is good, Jeff and I are going to make two nucs from this hive.

This is how the hive looked almost an hour after I was done....and it's February!  This hive is bound to swarm unless we do something. 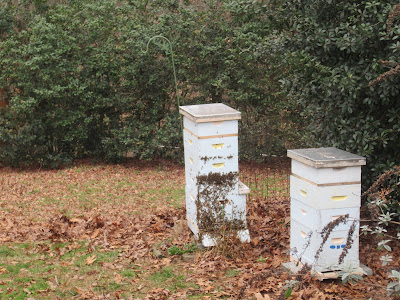 Email ThisBlogThis!Share to TwitterShare to FacebookShare to Pinterest
at 9:11 AM
Labels: bringing in pollen, checkerboarding, queenright