Thursday morning last week I had some time to go to Jeff and Valerie's for the second split of Colony Square.  This time I was all by myself.  I set up the nuc box and put the bungee cords under it for transportation purposes.  I had cut the window screen to size.  I was READY.

I suited up, lit and packed the smoker well, and opened up Colony Square.  I saw lots of queen cells - these bees want to swarm and may despite these two splits.  I used two medium nucs for this split.  I put five frames in the bottom box, mostly brood, eggs, and larvae.  I shook two more frames of nurse bees in, for good measure.  I put two frames of honey and pollen in the top box.

I bungee corded the whole thing together, stuffed the screened wire in the entry (I'm terrified of the staple gun and I didn't have anyone else with me to do it.)  Then I headed for the car.

I carefully put the nuc into the car, jumped in still in my bee suit because I only had about 45 minutes before my next appointment at my office (25 minutes away) and started driving.

As I drove I began to be aware of a steady buzzing in the back of the car that was increasing in volume.  In the rear view window I could see a mass of bees gathering on my back window.

When I arrived at my house, it was evident that the bees had easily pushed openings in the non-stapled screen over the entry and were gathering on the front of the nuc.  Undaunted, I gently used my gloved hands to lift the nuc and carry it to the backyard.  I walked slowly, hoping the loose bees would take the hint and come too.

Once in back of the house, I quickly moved the frames into an 8 frame medium box, waiting for their arrival. 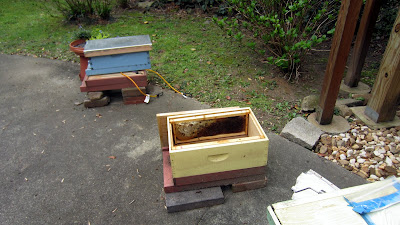 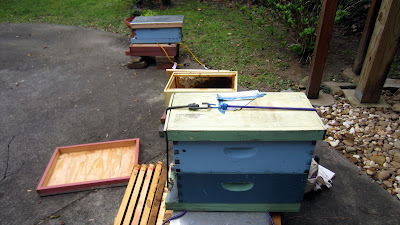 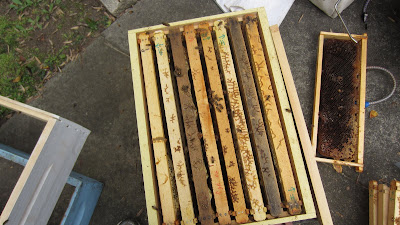 Within minutes the bees were moved into their new home and I was ready to strip off my suit and head back for the office.  I only had 20 minutes before my next appointment.

I ran into the house, shedding my beesuit as I went.  I straightened up my outfit a little, put on my work shoes, and drove to my office.  My car was FULL of bees from the escapees who had refused to move to the backyard. 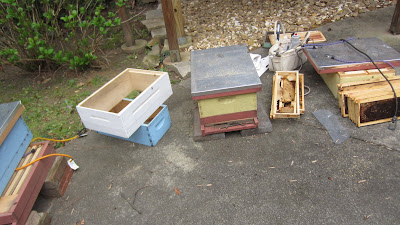 At the office I left the windows down to encourage their escape.  The bees were still there two hours later when I returned to the car.  Once home again, I used my bee brush and a mixing bowl to move the bees in several trips from car to hive box.

Later that day I found a clump of bees gathered on my mailbox.  I employed the brush and mixing bowl and a towel to cover to move them to the new hive.

When I told my brother the story, he said, "I know what you need to do, Linda….you should go into therapy to conquer your fear of staple guns!"

Email ThisBlogThis!Share to TwitterShare to FacebookShare to Pinterest
at 11:51 PM
Labels: bees in the car, colony square, nuc, split, swarm