For the last couple of days, I've been pretty sure my swarm trap had captured a swarm.  Bees flew in and out all day.  None of them had pollen on their legs, though and the hive didn't buzz at night so I wasn't certain.

However, I'm going to the mountains for a couple of days and I didn't want to come back and find the trap all filled with comb and impossible to move.  So tonight was the night to move them into a hive box.

For some reason I was so nervous and kept putting it off and putting it off until it was almost dark.  Then I rationalized that after all, this would mean all the bees had come home. 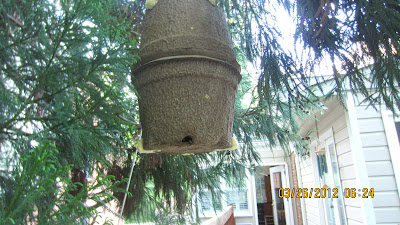 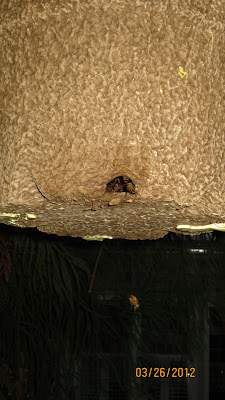 I unscrewed the connecting four screws and found a very small swarm (a kitten - to those of you who know what I mean  - not even a cat).  They had begun building comb attached to the side of the swarm trap. 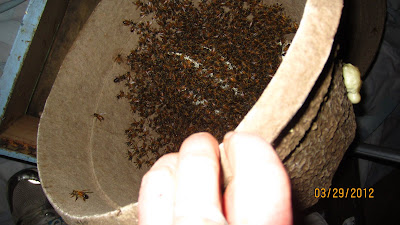 I spread a sheet under the nuc box I planned to put them in and shook.  I hit the bottom of the flower pot onto the deck to loosen their hold on the pot walls and then dumped them into the nuc.  A lot remained behind, attached to the comb. 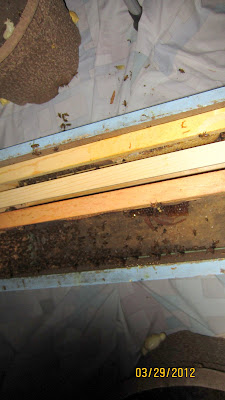 I carefully removed the three pieces of comb and rubber banded them into a frame.  Even if they don't reattach and use the comb, they can still reuse the wax.  I put one frame in that was fully drawn and one that was half a frame of comb.  The third had their three pre-made combs rubber banded in and the last two had starter strips. 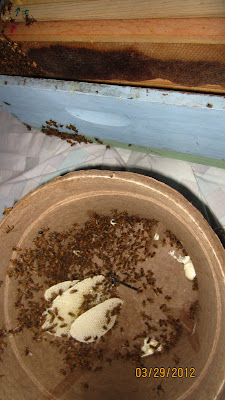 When all was said and done, there were still a lot of bees in the comb end of the swarm trap.  So I shook again but this time by accident slammed the edge of the flower pot into a pile of bees - probably killed the queen as I'm doing this in the dark.  Who knows? 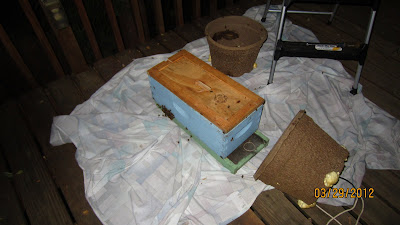 I brushed the little cluster you see on the side of the nuc onto a magazine and shook them onto the landing.

An hour after all of this, there are still many bees in the side turned flower pot.

Theory:  I killed the queen.
Theory 2:  It's a secondary swarm and the queen is a virgin and either hasn't mated or got eaten by a bird while off mating with drones so they don't have a reason to go into the hive
Theory 3:  They recognized how totally klutzy I was in this process so why should they like a home I provided them? 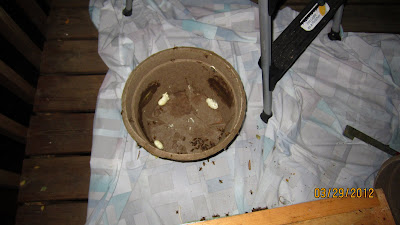 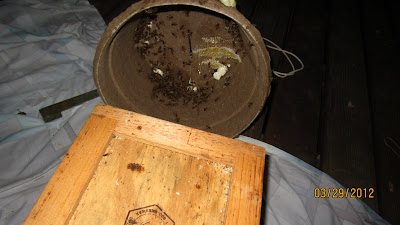 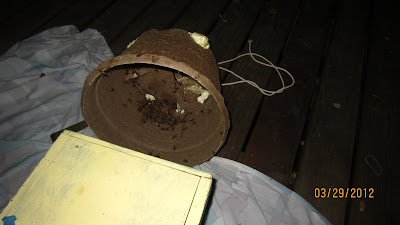 Footnote:  I moved the bees 1 1/2 hours ago.  I just went out there with a flashlight and they've moved out of the flowerpot and into the hive.  There are still about 20 bees hanging out but most went in which may mean there is a queen!  And maybe I didn't kill her.

It's such a tiny swarm.  I'm planning to leave the nuc on the top of a ladder directly under where the swarm trap was hanging until I get back and can put them somewhere permanent to live.  I'll bungee cord it to the ladder so there's no chance of it falling off while I'm gone.  Or maybe in the morning I'll move it to my backyard.