Travels with Linda - it's been a long BEE Day

I had been up earlier this year, and knew that one of the hives had died over the winter.  The other hive was alive then but since that weekend we've had a string of five days of temperatures in the teens.  My Atlanta hives did not survive that, so I had reason to think that maybe both of my hives in Rabun County were dead.

To my shock and amazement, bees were flying in and out of the green hive - the one that was covered with kudzu for most of the summer and where the bees had definitely died.  I opened it up and was greeted by a household of ants.  They were nesting in the edges of the inner cover. 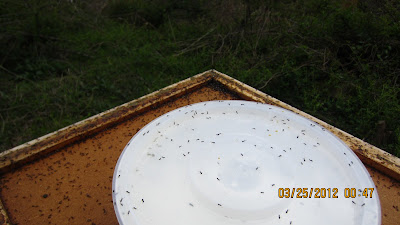 Upon my disturbance of their home, they began carrying out baby ants (click on the picture to see better). 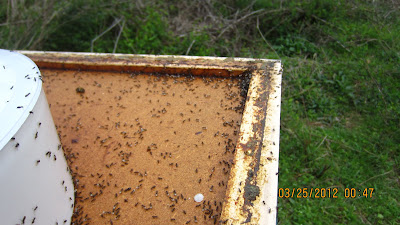 Despite the ant invasion, the hive was FULL of bees.  One of the gardeners there told me that he had looked over and hadn't seen many bees but then one day he saw LOTS of bees.  I imagine he witnessed the swarm that actually moved into this hive.  My old hive became an effective swarm trap...Free bees! 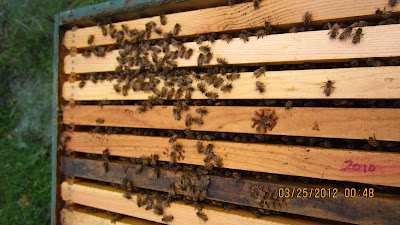 I inspected the hive and found eggs, young larvae and lots of activity.  They were using most of the frames in the bottom two boxes.  In the third box they had drone brood in two combs and hadn't started using the rest, but I didn't take it off - they'll need it soon enough.

The bees looked healthy but if you look at the photo below, you can see a red arrow at about 1:00 pointing to a varroa mite on the back of a bee.  If I can see that one, you can rest assured there are many in the hive. 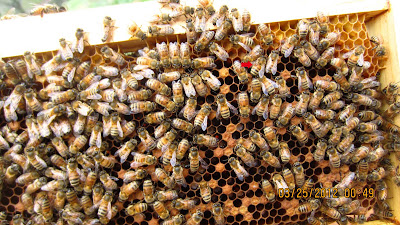 So the once dead hive has resurrected itself and it only cost me 1/4 a tank of gas to find this out.  Hannah had fun running up and down the creek bank while I inspected the two hives and the two packages of bees spent four hours today in the car (as did I). 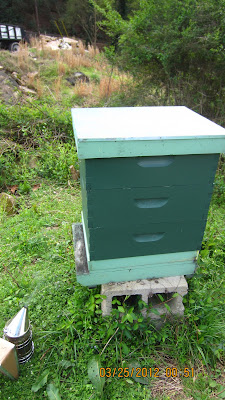 Both of these hives are doing well.  I'm back up in the mountains for spring break this coming weekend and we'll see how they are faring then. 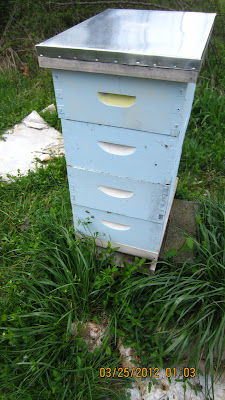