And last, but not least, I opened up the Morningside Garden hives this afternoon - a little over a week since installation.  It's really hot up there and the sun beats down on the hives.  The former manager of the garden told me that this hillside was a civil war look out for Union soldiers because from the location of the beehives, you have a great view of downtown Atlanta from a distance.  Below the hill behind the apiary, the Union stored arms and supplies. 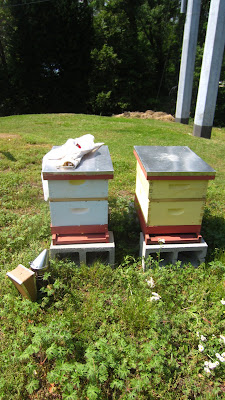 The bees had built wax but not as enthusiastically as the hive at Chastain or mine at home.  I do love how the bees get all possessive of their initial wax building as in this photo. 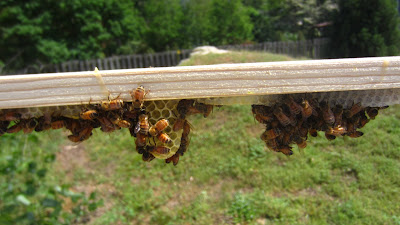 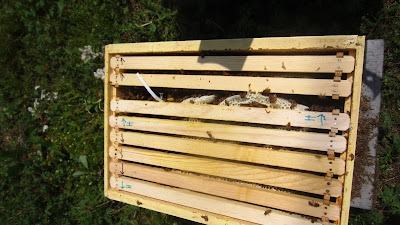 I did take a rubber band and tried to coax the crooked comb back under the top bar.  Then I moved the errant comb frame next to the wall in hopes they would straighten it out. 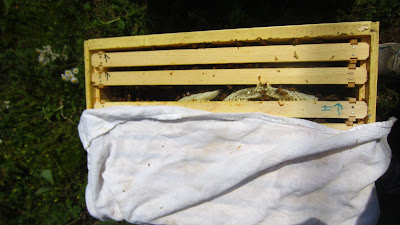 They didn't do quite as badly in the yellow hive.  In that hive they made some comb around the queen cage but the frames remained OK.   I just cut the jutting comb off and took it home. 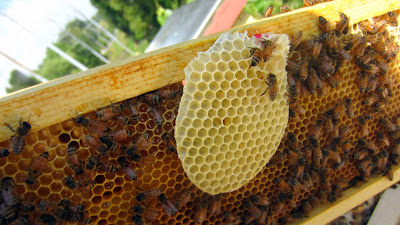 Julia suggested just laying the queen cage on the bottom bar of a frame - so I did that at Chastain and at all my home hives, but not at these two.

In the end I added a box of frames to each of these hives.  I left the food on the yellow hive and thought about coming back with more for the blue hive.  Not much water to be found up here and they may not be able to make wax easily. 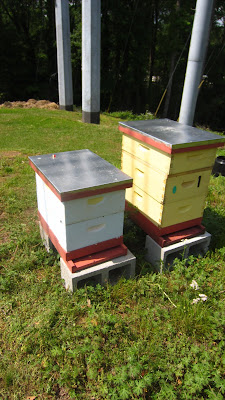 Email ThisBlogThis!Share to TwitterShare to FacebookShare to Pinterest
at 10:36 PM
Labels: queen cage