A Sad Day in the Life of a Beekeeper

Right after lunch today, I inspected the hives at the Morningside Community Garden.  The yellow hive has been washboarding every time I've stopped to check onmy tomatoes and the blue hive looks like in the picture below.  So I've been worried about the state of the blue hive - is it going OK?  Is it dwindling?

Today I checked it out. 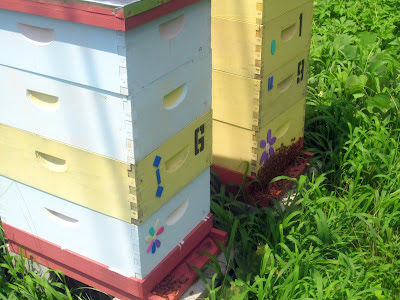 The top box on the blue hive has two frames of comb that I moved into it for a ladder, but nothing else.  The box below it, though, is filled with capped and uncapped honey.  The last time I looked, the only honey was capped.  The bees are bringing in something - I don't know what it is, but all of my midtown hives are bringing in nectar - and there are frames being filled.  The frame below is from the blue hive; the next photo is a frame from the yellow hive. 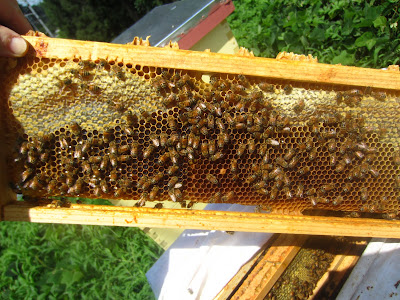 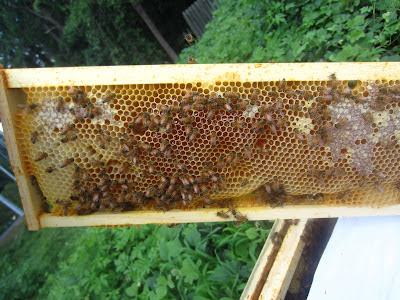 At this time of year, unless I have reason to be concerned, I am only looking in the hive to see:


Otherwise I just shut them back up.  The only maneuver I did was to add bottle caps to the tops of the inner covers to increase ventilation.  Wonder if that will stop the washboarding? 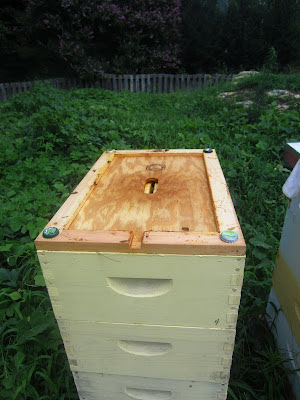 Then I returned home to check on SOS1 - this hive has been hard to get going.  We made a split from Colony Square much earlier in the year and because the bees were so mean, we named it SOS (Spawn of Satan 1).  These bees seemed unable to make a good queen.   Their first queen was poorly mated; their second queen while mated OK was a poor layer and slow to build up.  For all I know they even made a third queen.

Last Thursday I went through the hive.  I didn't see the queen (which I should have paid better attention to) and I noticed that the numbers were still way down.  I added two frames of brood and eggs from my strongest hive at my house to help them increase their numbers.  I thought if they hadn't done any better, this week I would combine them with SOS 2 right next to them.

So I opened the hive - no bees.  There were about 30 bees on the inside of the top cover.  I think they were newly emerged bees from the frames I gave the hive last week.  There were no more bees, no honey, no nothing in the hive.  There were remnants of eggs and brood on the two frames I added last week.  The bees were gone and the wax moth larvae were already in the bottom box.

I shook the 30 bees onto the inner cover of SOS2. 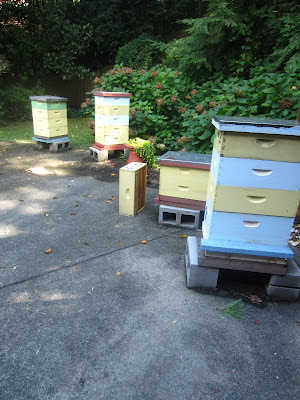 I've now lost four hives - and all have absconded.  The only good news is that all of them were free bees - well almost all of them.  The first hive to go was my top bar hive which was a swarm collected in Decatur.

The second to go was my hive in Rabun County.  That hive was a purchased package from Don in Lula in 2011, but I had assumed they wouldn't make it through the winter and had purchased two packages to replace the two Rabun hives.  Then I found to my joy that one dead hive had a swarm move in (and it was thriving last time I was up there) and the other hive was doing well up until the beginning of June.  I didn't go through it to find out why they had dwindled.  There were still bees in that hive, but I don't think they had a queen and the SHB had taken over.

Last week just before adding a new box and only a week after seeing the queen, my Little Kitten swarm absconded.  They left nothing behind.

And then today I lost SOS 1.  I feel deeply disheartened.  The only saving grace is that most of them were free bees.

Email ThisBlogThis!Share to TwitterShare to FacebookShare to Pinterest
at 12:10 AM
Labels: absconded hive, hive ventilation, Morningside