I went up to the mountains for the Fourth of July to see the fireworks and to check on the bees.  I love the Rabun County fireworks - we go and sit on a blanket in a field near the Rabun Gap Nacoochee School.  We wait eagerly for dark (which doesn't come until 9:30) and by then the grandkids are sleepy.  But the fireworks are grand and glorious - (and don't include Atlanta traffic jams) - so we have a great time and are back at the house by 10:05.

Since the Fourth was on a Wednesday, all of us needed to go back to Atlanta the next day.  Before I left I went to check on the bees.  Sad news:  The over-wintered hive was almost completely dead - all of the honey was covered in small hive beetles and the whole hive smelled of orange crush (a sure sign of being slimed by the small hive beetle).

I was so upset that I didn't want to look at the evidence and determine the reason the hive failed, allowing the rise of the SHB.

When I was last up there about three weeks ago, there was no nectar and although I saw brood and eggs, the hive had no evident stores (although the slime would indicate otherwise).  I imagine that I may have killed the queen in that inspection.  When I put on one of the boxes, a roar went up from the hive, but I discounted the possibility.  If the queen died in that inspection and stores were so low, the hive may have not been able to make a new queen.

The frame of bees below is all that were left.  Since I didn't know what caused the end of the hive, I didn't shake them into the other hive for fear of contaminating them, if the hive were diseased.

I regreted not having enough supplies - I couldn't move the bees into a nuc because I didn't have one.  I had brought boxes to add but not solutions to problems. 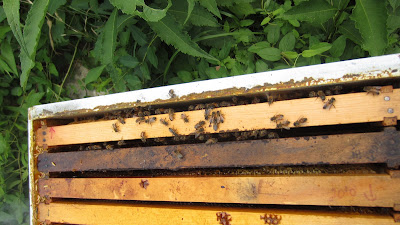 On the good side of things, the other hive, which was a swarm that took up residence there this year, was busting out all over with bees.  In spite of encroaching kudzu, hundreds of bees were coming and going.  Afraid and feeling like a bad beekeeper, I didn't inspect this hive - didn't want to kill another queen.

I looked in the top box which was completely empty on my last visit.  They had filled five frames, drawn new wax and were filling it.  Sourwood is blooming up there now and this looks like nectar that ends up as sourwood honey.  We'll see.

I won't go back until the 22nd and by then the surviving hive may be covered up with kudzu. 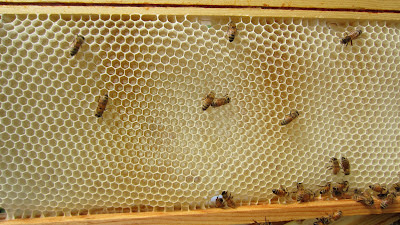