I opened my hive that has died in my backyard and was sad to find that there were many dead hive beetles along with dead bees.  The cluster was very small - about the size of a tennis ball - which makes me wonder if they went queenless into late December. 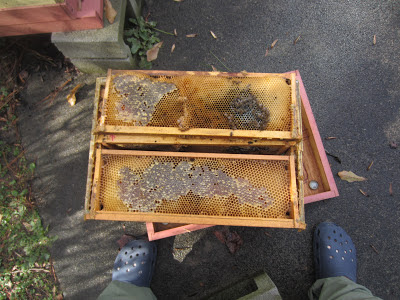 Bees simply can't generate enough energy to move when the temperature is below 50 and certainly not if the temperature is in the 30s as it was for a week in late December.  These bees had resources and couldn't move to get to them.

Even sadder is another frame where the bees who are dead are just above honey on the same frame. 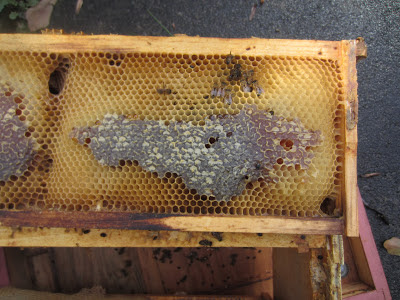 There were a lot of small hive beetles in with the bees but since there were still frames of honey in the hive, the SHB is not the cause of the hive death, but starvation and cold weather was.

I had seen bees flying from this hive in early December, but they were no longer present when I returned from the mountains after Christmas.  The queen's laying is tied to the winter solstice so she had not begun in any way.  I am thinking with the small population in the cluster and no evidence of any brood rearing that this hive was queenless going into winter.

I don't know if it's safe to give this honey to my two-box medium hive that appears to be quite happy but feels really light.  I do think the bees starved and did not die of disease, so I think that means I could give these frames of honey to the light hive, but I'm scared so I didn't do that today.  Thought I'd at least sleep on it.