Bees as Pets vs. Survivor Bees

I've now heard two talks at bee meetings in which the speakers say something to the effect of this:  "The bees are our pets.  Would you let your dog or cat starve to death?  Of course not, so why would you let your bees starve?"  Kim Flottum, editor of Bee Culture, said this last year at the GBA annual meeting.  Then last month Jennifer Berry said pretty much the same thing at the Metro Atlanta short course.

It's an effort to encourage new beekeepers to establish the practice of feeding their bees.

I don't know how to think about this.  My inclination is to go with leaving honey on your hives so that the bees go into winter with enough to make it through until the nectar flow starts.  Of course if we keep have earlier springs and nectar flows that happen out of sync with the bees buildup, then the bees won't have enough to go through the winter, regardless of whether you leave honey on the hive - there won't be honey to leave.

That's the way it was this fall.  The nectar flow last spring (2012) was early and concentrated so that the bees only had about three weeks to collect their entire supply.

In the Complete Idiot's Guide to Beekeeping, Dean and Laurie say (p.85) about feeding sugar syrup, "these are not acceptable substitutes for honey as bee food.  Their nutritional values are not equivalent.  They also do not have the same pH as honey and so alter the microbial culture of the hive.  Many bee pathogens grow more readily at the pH of sugar syrup than at the pH of honey."

The previous winter I fed all of my hives bee tea going into winter.  I still lost about half of my hives.

In 2012 I only harvested from two hives.  I left all the honey on the other hives.  I still lost hives.  I lost the second biggest hive in my backyard to fierce robbing (see video on this blog).  And we lost a hive at Stonehurst and at Sebastian's house each to robbing.  I think the terrible robbing this year was due to the climate change-induced early spring and crazy short nectar flow, so many bees were short on stores.

I lost a couple of hives who absconded because they knew they didn't have enough honey to go into winter.  I fed honey to the hives who remained.

I fed honey to the hive at Chastain, but even though I could see bee activity and the hive felt light, they didn't take the honey.  I fed honey to Sebastian's remaining hive but they also didn't take the honey.  When I say that, I mean that the rapid feeder still was full of honey the next time I looked under the telescoping cover.  I haven't checked on Sebastian's bees to see if they are still alive.

In my own backyard, I lost a hive that I didn't feed with honey still in the hive but not by the cluster.  The cluster was so small that I think it's more accurate to say I lost that hive to queenlessness going into winter than to say it starved, although that was the immediate cause of death.

At the Morningside community garden, one of my hives is alive and active (I didn't feed it) and the other is dead .  I haven't opened it to see what the cause of death was.  The Boardman on the front of this hive was for water in the heat of summer and I just never took it off. 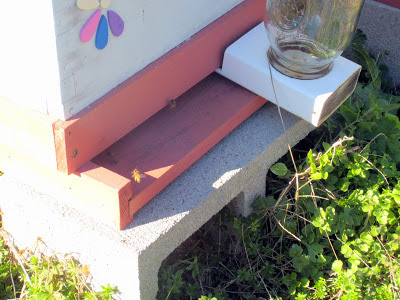 In my own backyard I have two vigorous hives.  At Jeff and Valerie's house where I kept the bees on the deck, I have at least two live, strong hives and possibly one other.  I lifted the top cover of Five Alive and saw a live bee walking around although no bees were flying out of it.  The fourth hive appears dead.  Those bees (all four hives) were full of honey going into winter.

At Rabun County, the last time I looked up there, the one hive was still going strong.  I fed them but they didn't take the honey.  You'll remember the other hive was knocked over and destroyed.

I would rather take these hives that made it through the winter and split them to make two strong survivor hives.  These are hives that stored enough and fought off the varroa vectored diseases.  Jennifer Berry said to me at the short course that while that was fine, I wouldn't know WHY the hives survived.  She's right about that.  But I'd still prefer to try this and go for bees that don't need me to feed them.