Today I came home from a mountain site visit for a professional conference, immediately donned my bee gear and headed for the bee hives.  We've had such rain in Atlanta and finally today was sunny and a temperature when I could open the hives.  It was a mixed experience. 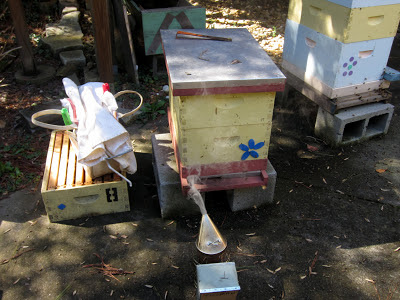 In my own backyard, I opened the first hive which was small going into winter.  It was housed in two boxes but really only needed one.  There was still a little honey on the hive. 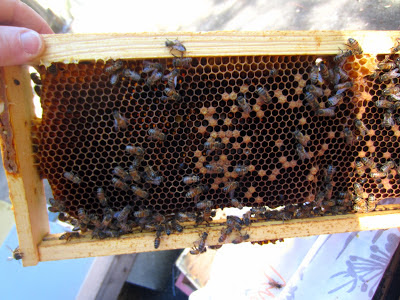 This is a small group of bees but the queen is laying.  At first I only found spotty brood so she may have some problems.  I did find further frames with more solid brood on them, though.

I decided to treat this hive more like a nuc and left it in a single box.  I'll check next week and maybe either combine it with another or give it more resources from another hive.

Originally my plan was to give this hive some frames of brood and eggs from the very strong hive next to it (the only other hive in my own yard).

I opened the hive next to it and found it boiling over with bees: 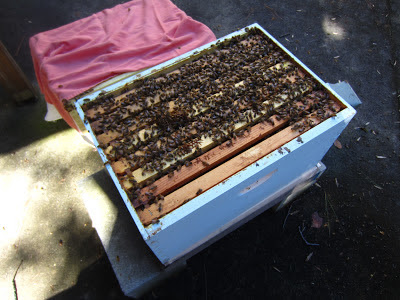 When I looked through the hive, I found it to be full of honey and I found frames where they are obviously bringing in new nectar (I saw this in several hives today).  I don't know where they are getting it at this February date, but they are finding nectar somewhere.

But then my heart sank when I pulled the first frame with brood on it.  Only drone brood and tons of it - three frames that looked like this: 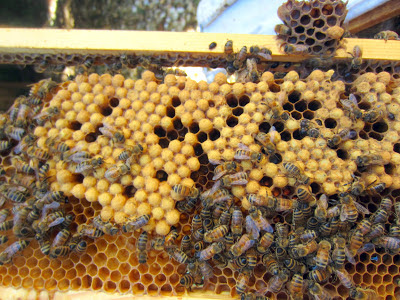 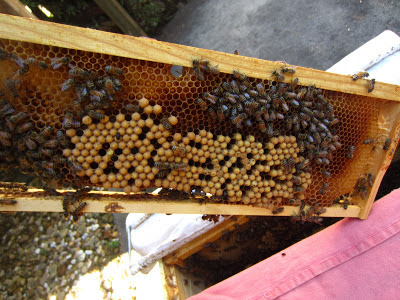 I looked through the entire hive and did not find ANY worker brood.  This probably means the queen who was new last year was probably "short-bred" to use a Keith Fielder term.  That means that she didn't get enough mating before she was placed in the nuc and thus couldn't make more worker brood.

Queens need to fly out several times sometimes to get fully mated or when they are in the air, they need to mate with up to 17 or so drones.  This one may not have gotten that opportunity.

The bees are everywhere in this hive.  I don't know how to make sense of this unless 21 days ago, her sperm ran out.  It's also possible that I couldn't see eggs in other frames since it was about 4:00 and the sun was not in a position to allow me to get a good view, but this was my strongest looking hive at this point, so I was really upset by what I found.

Originally I had planned to take a frame of what I thought would be plentiful brood and eggs from this hive to put in the small hive next door, but that was not to be. 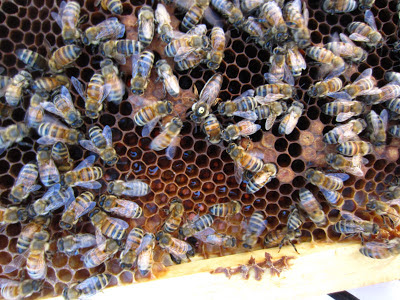 Then I went to Sebastian's house where I found a lovely surprise.  This hive was doing well.  I didn't spend a lot of time in the hive because as soon as I knew it was OK, my instinct was to close it up.  I saw the queen and was happy.  She still had her yellow paint dot, though quite worn, on her thorax.

As you can see, this frame is full of nectar.  I was so pleased to see this.

I left Sebastian's and rushed down Piedmont to the Stonehurst Place Inn to check on those hives.

There are three hives there, although one box is empty and has been since right before harvest when the largest hive was robbed out and died.  I left one box there as a swarm lure.  The two that are left include one strong hive and one that doesn't look too great.

I opened up the weak one first.  I found only two deep frames of bees (these hives were purchased nucs last year).  The hive appeared queenless.  Oddly there was a full super of honey on the top and more honey in the second box although it wasn't full.  The bottom box was full of equal amounts of hive beetles and bees.  (Odd that the beetles weren't in the honey).  The bees looked pitiful.  The brood I didn't get pictures of, but it was scattered and looked old.  I think the hive is queenless.  I took a frame of brood and eggs from the stronger hive and put it into this hive to give them a chance to make a queen, but I really have my doubts.

The strong hive looked great.  Good brood, lots of it and frames of pollen and nectar.  This hive is a keeper.  I took a frame of honey out of the weak hive to put in a frame of brood and eggs from the strong hive. Since I don't know if those bees are just weak from queenlessness or because they are ill, I brought the honey home rather than giving it to another hive.  I replaced the empty space with a drawn comb. 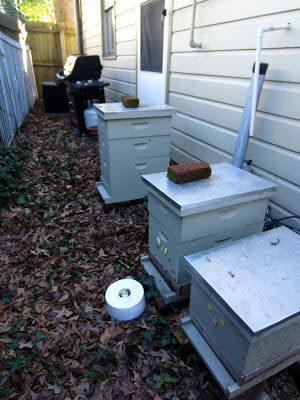 Last but definitely not least I went to the Morningside Garden hives.  There is one hive that is dead there.  I did an autopsy on it and found absolutely no bees in the hive.  There were dead bees on the screened bottom board - I believe they went queenless into winter and died in the first cold snap.  Clearly they didn't starve.  I took the hive apart and left one box on the hive stand as a swarm lure. 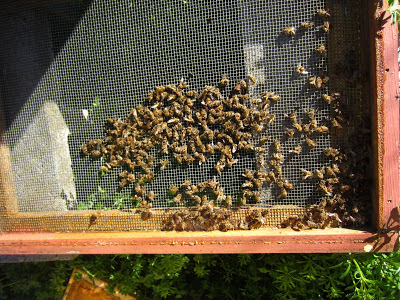 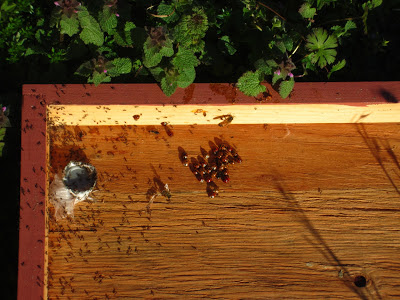 Then I opened the live hive and found the best hive of the day.  This hive was thriving.  Under the cover, I found lots of ants and of all things, ladybugs.  Julia told me she found ladybugs in one of her hives.  This is a first for me in eight years.

But inside the hive were frames and frames of beautiful brood patterns.  I didn't see any swarm cells but I didn't look into the bottom box.  By the time I got here the sun was setting and I had my answer - the hive was doing well. 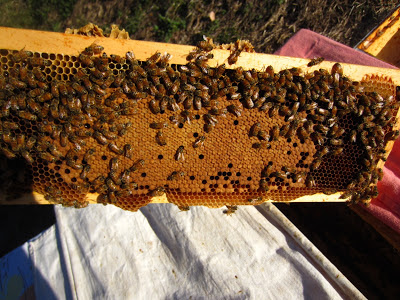 BTW, I worked on six hives today, lit my smoker and left it at the hive entry, wore no gloves, moved very slowly and did not get stung once even though these bees have not been disturbed all winter.  One of the best parts of wearing no gloves is I could really feel the heat of the hives.  In summer, Atlanta deserves its moniker: Hotlanta and there is no difference between the outside air temp and the temp inside the hive.  But today it was 60 outside but 90 in the hive around the bees and I could really feel it by going gloveless.

I also didn't brush off any bees.  If a bee landed on my hands, as many did, I continued to move slowly and trusted that they weren't after me but rather were landing on my hand because it was there.  I loved the way it all felt.

So I still need to visit the hives at Timber Trail.  I hope the two there are doing better than some of the ones I observed today.  I have time tomorrow, but I think the weather is going to be cold and not good for opening the hives.
Email ThisBlogThis!Share to TwitterShare to FacebookShare to Pinterest
at 10:01 PM
Labels: adding frame to queenless hive, brood pattern, queen sighting, queenless, small hive beetle, swarm lure