Today I had a special time for Mother's Day with one of my daughters getting a manicure and pedicure, something I NEVER do - it was so relaxing and a really lovely experience.  But before the mani-pedi, I was rushing around checking on bees.

I checked on the bees at my house.  The package installed this year was full of honey and needed a new box.  I moved one of their drawn frames up into the new box and was happy about that one.

The drone layer hive was calm.  They had not used the frame of brood and eggs I gave them on Thursday to make queen cells, so I believe they do have a queen, but I didn't go down deep into the box.  I did give them a new box because they were also full in every box with nectar being capped.

The Patty swarm hive had not filled their most recent box, so I didn't change anything in their configuration.

I only had an hour before I needed to be ready to go with Sarah.  Over the weekend, I had heard from the Stonehurst that they had dead bees all over their driveway.  I had to be creative with my path to Stonehurst because with the gorgeous day in Atlanta, everyone was trying to drive to Piedmont Park and the inn is one block away from the park.  But when I finally got there, the bees looked healthy but didn't need another box.  I didn't see that as cause for worry because it has been so rainy - when could they have collected nectar?

So I had about fifteen minutes to stop by the Morningside garden hives on my way home.  I had an extra box with me - it's a fabulous hive and was filling itself up with honey.  I also had a ladder with me which is required for me now to get the seventh box off of the hive.

I got to the top of the hill where the bees are.  Should be a great place for bees.  There are blackberries blooming all the way down the hill and kudzu everywhere.  Not to mention the organic community garden at the foot of the hill.

A terrible smell met me as I approached the hive.  In front of the hive was a dinner plate size round of dead bees in a pile about 2 1/2 inches deep.  Thousands of dead bees rotting in the sun.  What I was smelling was dead bees. 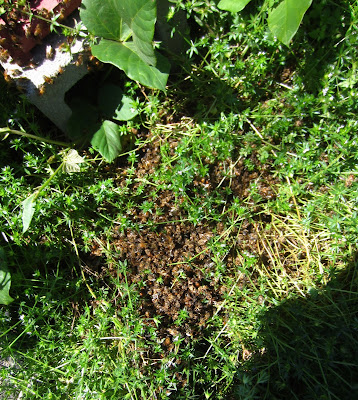 I have corks as hive entry reducers on this hive and one of them was lying at the edge of the pile.  I wanted to throw up, but what I did was cry.

This was my best hive.  And here was a pile of dead bees the size of a swarm.

I got kind of paranoid and with the cork on the ground I thought someone had poisoned the bees - pulled out the cork and sprayed Raid or something into the hive.

But there were still bees flying in and out of the hive, crowding the entrance.

I didn't have time because Sarah was coming to pick me up for our Mother's Day fun, so, sad that I couldn't figure it out right then, I went home and went with Sarah for such a relaxing mani-pedi that I almost forgot about the death on the hill.

I couldn't quit thinking about the hive after I got home, so I called my friend Jerry Wallace who lives near me and is a great beekeeper.  He came with me to open the hive around 7 (I figured with the foragers all home, we could see how bad the damage really was).

We took every box off all the way down to the bottom, figuring that if someone had poisoned the bees, we would be able to smell the Raid in the wood of the slatted rack.  The slatted rack smelled normal, no poison residue, and I have a really good nose.  Jerry nor I could smell anything.  He pointed out that even if someone had sprayed a poison in the hive with the SBB and the slatted rack, the spray would have been deflected by the slats back through the SBB.

The most likely possibility, however, is that the bees have found a nectar source that has poison on it or in it.  They don't know the difference and are taking it in and dying.  So the hive is not out of the woods yet.  I often anthropomorphize my bees, attributing wisdom and emotion to them.  The fact of the matter is that they signal each other about nectar sources but aren't wise enough to notice that each bee who goes to that source comes back and dies in front of the hive.  The bees may not yet stop collecting from the poison source.

Meanwhile there are at least two full boxes of honey in the hive and still thousands of bees - it's like a very strong hive after a swarm when you can hardly tell the hive swarmed because so many bees are still there.

So maybe there's hope for the future.   Maybe they will switch to another nectar source.  Maybe all is not lost and the Mother's Day Event may turn out better than I think.