I know it's not the right time of year to start bees, because there's no flow and the bees are hunkering down for the winter.  But this year at our annual bee auction for my home bee club, Bill Owens offered ten hives of feral bees that he had removed as auction items.

Bill Owens is the best beekeeper in the state of Georgia with a certificate to prove it.  He is Georgia's ONLY certified Master Craftsman Beekeeper.  I enjoy Bill - he's a great teacher, has an always pleasant approach to things, and started me on the certification road myself.

Bill has appeared a number of times in this blog - for example, here, here, and here.  He has a business (one of his many jobs - he teaches, he's a firefighter, he's a beekeeper, he owns a farm, he's an author) doing bee removals.  In addition, he doesn't treat his bees and approaches them with the idea that if they can survive, then they are strong enough to tolerate the varroa mite.

So of course, I decided to bid on two of Bill's feral hives in our silent auction.  Others were also bidding on these hives, but I was determined to get them so I was one of those lurkers who hung around the bidding table, waiting to pounce if someone stepped in to overbid me at the last minute!

I won the two hives, so Jeff and I went to Bill's house in Monroe, Georgia, to pick them up on Thursday night.  I use eight frame boxes, but he had requested 10 frame boxes into which to transfer the bees.  I unearthed a couple of ten frame deeps (the only two I still own) and Jeff and I headed for Monroe. 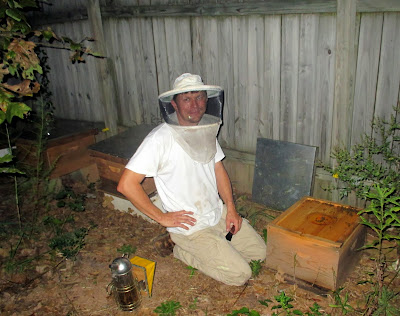 We got there just at dark at 7:30 and Bill donned his veil, lit his smoker and transferred the bees into my boxes.  First he shook the bees off of the cover into the box. 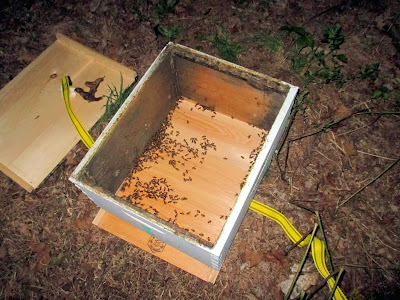 You can see our strap under the box in preparation for the move.

He then added the frames, one at a time, until the box was full.  These bees had no stores to speak of and Bill advising feeding them "heavily."  He did say he could smell some goldenrod honey in the hives, but didn't see anything. 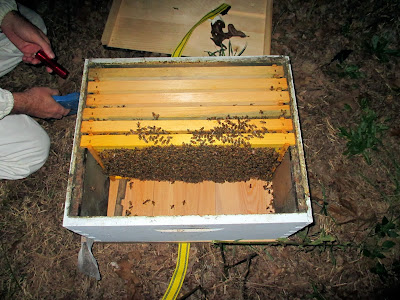 Jeff manned the staple gun (which I am terrified of using - I do use it, but if someone else is around to do it, I happily hand it over to them) and we closed up the hives with screened wire.

It was quite dark and Jeff shone a flashlight onto the hive so in this photo it looks as if the bees are in some weird circle pattern, but that's the light of the flashlight - made my camera think it didn't need to employ the flash. 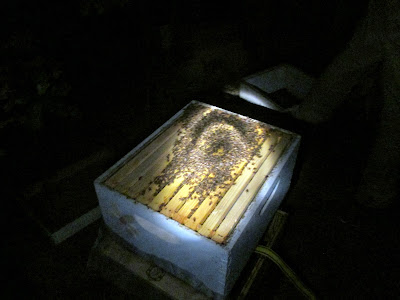 I am now convinced that my yard can't handle more than four hives.  My friend Tom has wanted hives in his backyard so ahead of the auction, I asked him if he still wanted hives in his yard and he said yes.  Jeff's office is just down the street so he can oversee the "heavy feeding" of these hives as we go into winter.


So around 9:15 on Thursday night we delivered my Owens' hives to Tom's house where Jeff and I will keep them. 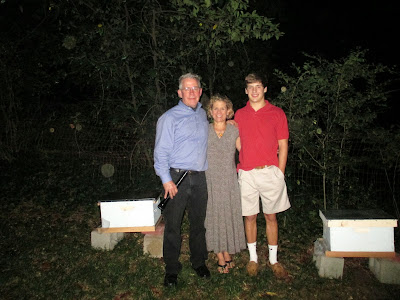 Leveling the hive was a challenge but my smart phone has a level on it and we managed to get both hives pretty level.

I returned the next day to check on the bees and to give them their first round of "bee tea."
We'll continue feeding them this as winter approaches.  I wish I had honey to feed them but due to the rain, I do not. 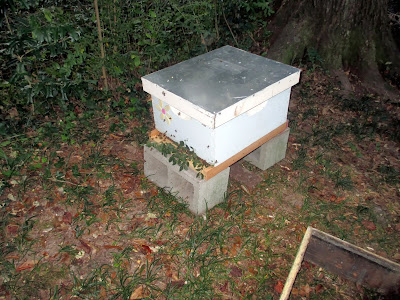 We are using rapid feeders for these hive - they hold about 1/2 gallon of bee tea. 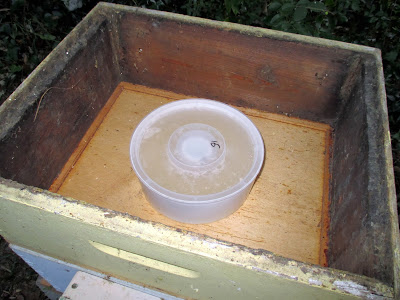 So here are the hives, hopefully adjusting to the new location.  The branches on the front of the hive are to help the bees realize that they are in a new place and need to reorient.

We'll see how this works - starting a new hive in the fall.  Bill loved that he had given the hives for auction and was talking about doing it again next year - if these work, I'll probably bid, lurk, and maybe win again!