In Atlanta, it's Snow-Jam but in the Bee Hive, the Queen is Preparing for Spring

In Atlanta on Tuesday, we probably had the traffic jam of all time; the one that will go down in the record books.  People were stuck in their cars on the iced over Interstate for upwards of sixteen hours.  They were overnight in their cars with no bathroom, no water, no food.  This was typically because far down the road ahead of them, an eighteen wheeler had slid down an exit ramp and ended up sideways on the highway.  The rescue vehicles couldn't get to them or help them so everyone sat.  This was true all around the Atlanta Interstates and main thoroughfares.

This was certainly a sign that in Atlanta in January, we are in the grip of winter.

But in the bee hive, on the winter solstice, the queen got the urge to begin her spring build-up.  Her instincts tell her on that day that times have changed and the days will start getting longer.  In response, the queen prepares for the hive's spring population and in the dead cold, she begins to lay.  Not a lot of eggs at first - just a few, but she does start.

She has to create, for example, drones to carry her genetic material into a drone congregation area to mate with other queens.  Dean Stiglitz in his video on how mating occurs in the bee (hilarious - you should watch it for its short five minutes) points out that the drone is actually a flying sperm and only represents the queen's genetics.  He then mates with another queen so in essence two queens are mating with the drone as his queen's emissary!

A drone takes 24 days to mature so if there are to be drones ready to fly at the end of March, then she has to lay his egg around the end of February.  And why do the drones need to be available early in the season?  Because the mission of the strong hive is to split itself into two in a reproductive act of splitting the organism that is the hive.

Also if the reproductive drive of the hive as a whole is to split with one half of the hive flying away to form a new organism (hive), then there must be plenty of workers to accomplish this.  Workers take 21 days to emerge and there must be workers around to care for the eggs that are laid to make all of the brood, both workers and drones.

Thinking like this, it is obvious that the queen MUST start laying again increasingly at the winter solstice.

So in the last two days, while traffic was frozen in Atlanta and the hive was covered with ice and snow, the bees inside were awake and working.  It's true that if the air outside is very, very cold, the brood must be protected, so the queen does not lay more eggs than she has workers to keep the brood warm.

Here's what my hive looked like in my backyard: 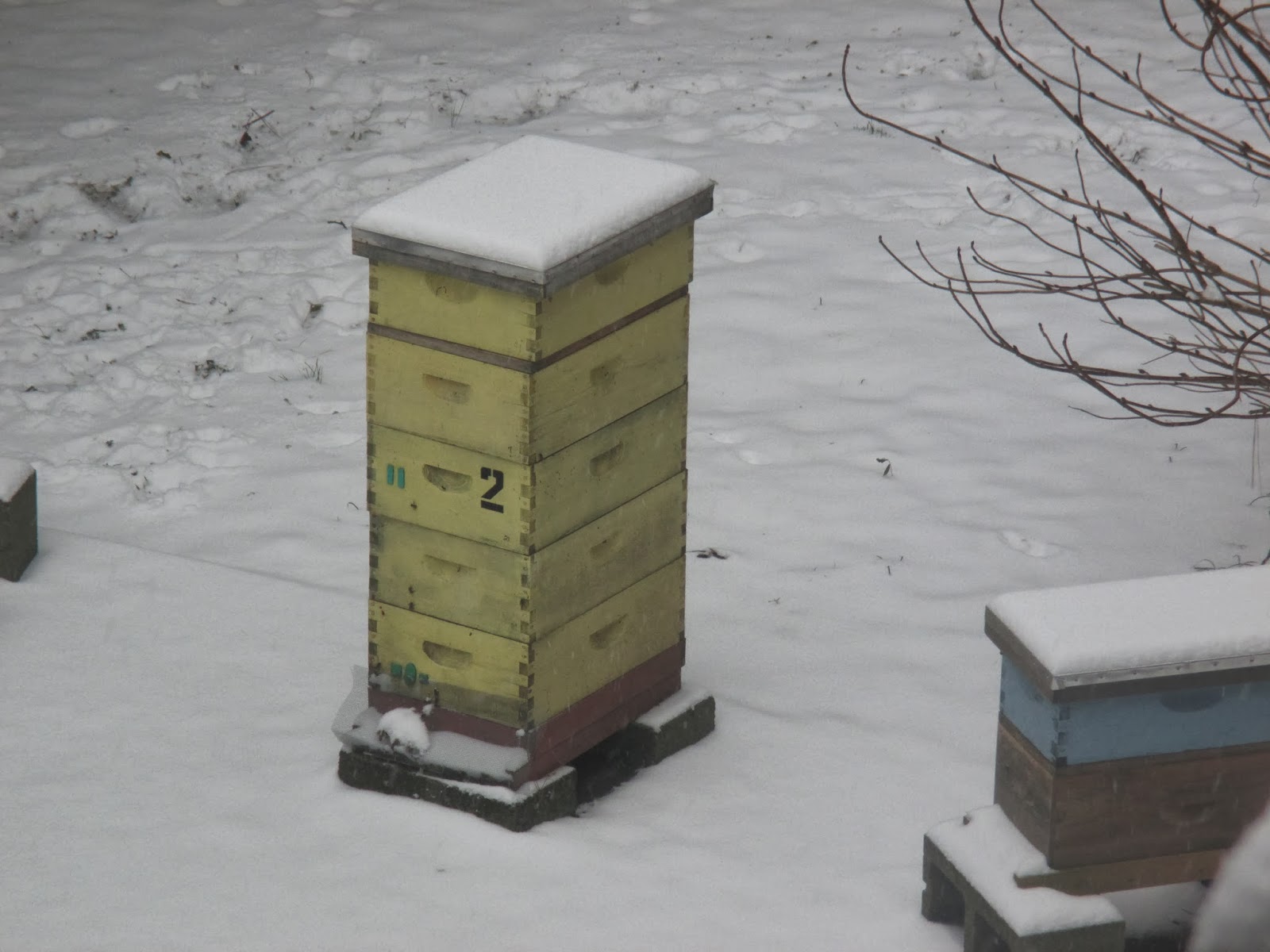 Last year I got a lot of criticism from a forum in Great Britain because I had four boxes on an overwintered hive.  Let me remind you that I keep my bees in 8 frame medium hives, so three boxes is the equivalent of a deep and a medium.  Also the fourth box was where they stored the bee tea I gave them above the inner cover, so the top box is empty - just a surround for the rapid feeder.

And since it doesn't happen often, here's a photo of my front yard in the Atlanta snow yesterday: 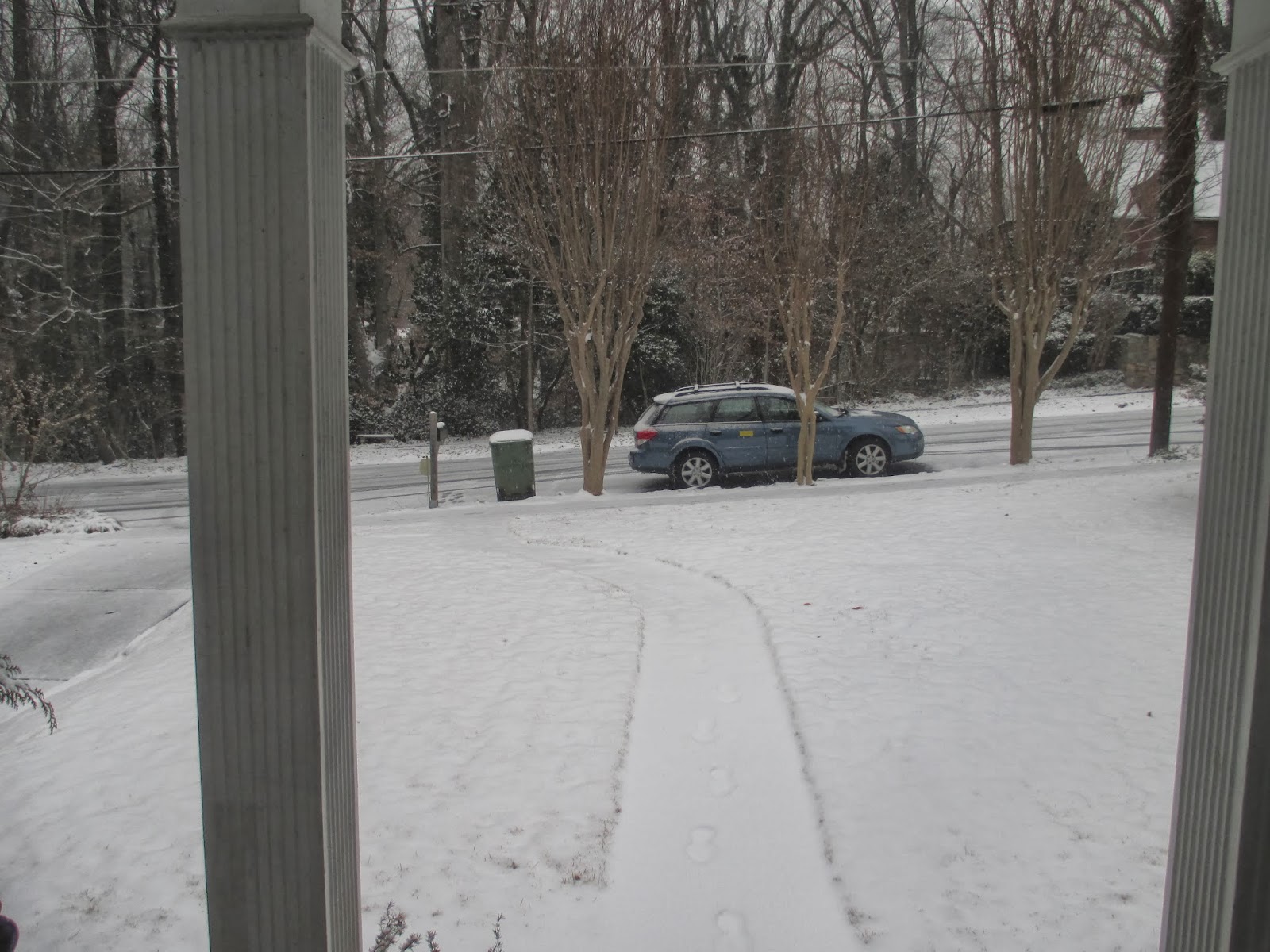 This afternoon most of the street had melted away, but my yard front and back is still covered with snow.  The temperatures tomorrow should be high enough to melt that away as well.

But I canceled a planned trip to Philadelphia to visit my daughter because I had no confidence that I could get a taxi to the MARTA station with the roads like this.
Email ThisBlogThis!Share to TwitterShare to FacebookShare to Pinterest
at 11:09 PM
Labels: drone brood, snow, swarm, winter solstice