There's no Such Thing as a Free Lunch!

All beekeepers get excited when they are called for a swarm!  I'm in that boat - I get so excited that I keep all my gear in my car during swarm season so I'm ready to go if called.

Last night as my work day was ending, my friend, Curt, called me and said his hive had swarmed for the third time!  He now has three hives in his yard and he has reached his limit, so he offered the swarm to me.  It was about to rain, but I drove by his house where I saw the swarm about 16 feet up in a cedar tree.  I thought I could get it with the swarm catcher, but it was about to pour and I was exhausted. 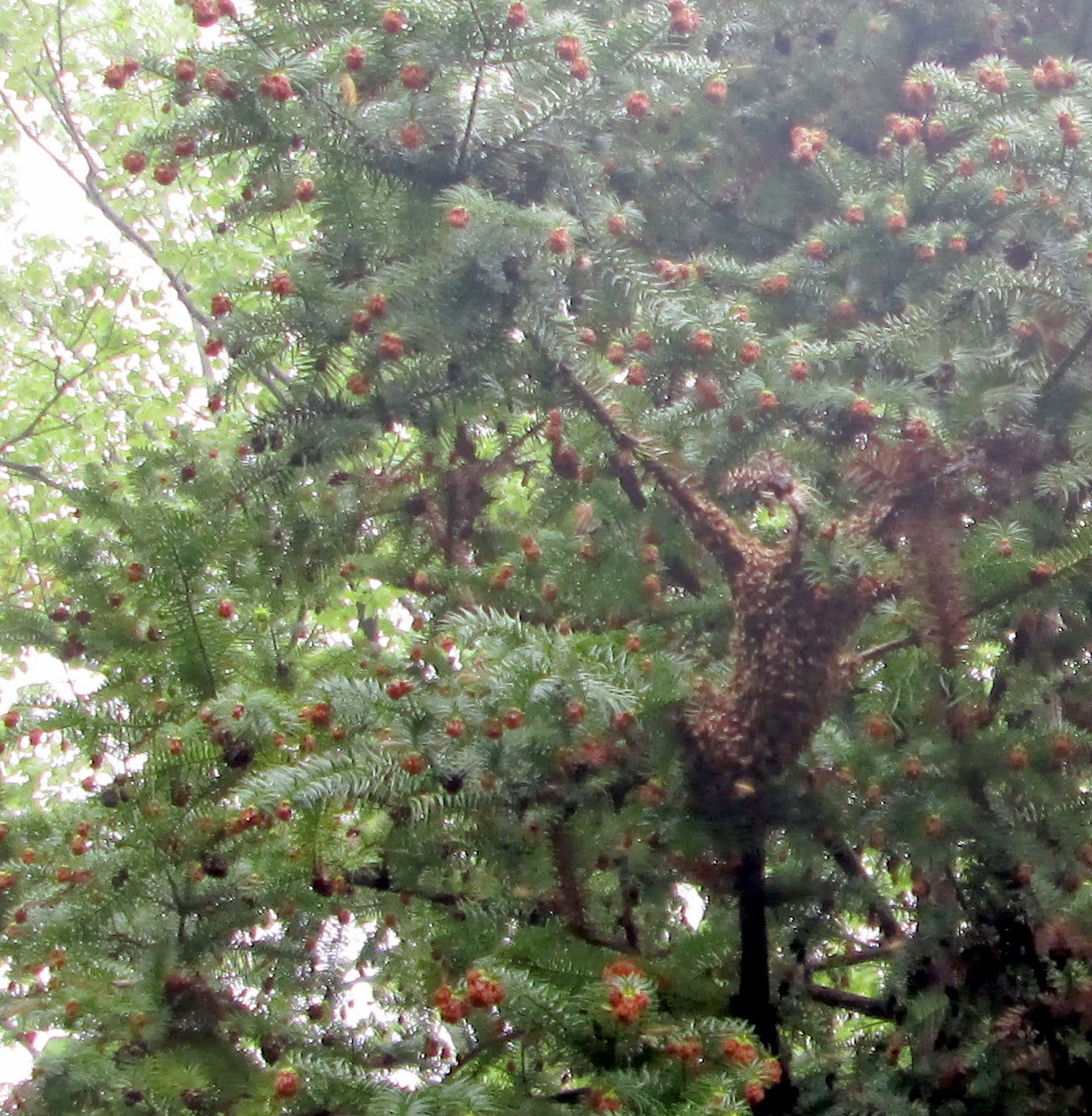 Here's the swarm as up close as I could get it with the zoom on my camera. 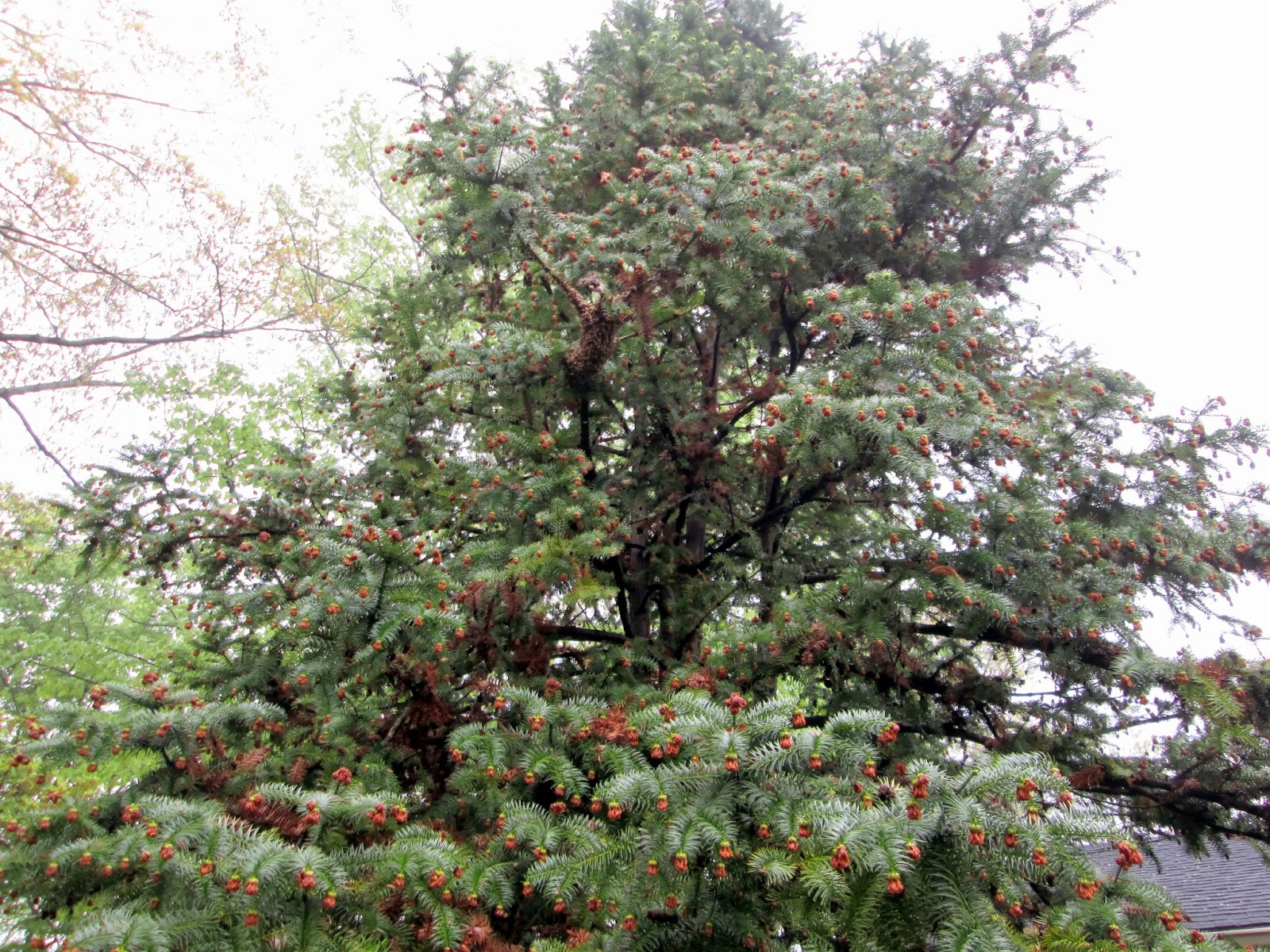 Here's its location in the tree - up toward the top on the left - see the house roof in the background? I had to put the swarm catcher on I think the fourth or fifth notch to get it long enough.

I had set up the box to receive the swarm on top of cardboard.  I also put a white sheet under the swarm's tree location.  I remembered Bee-wo Jima and put the box a little ways away, but after the first bee dump, I realized it could be closer so I set it on the white sheet.

What I am using is a plastic file box. I have a ventilated hive cover to close it and a white hive drape to cover that. A bungee cord is set to go around the collection box. 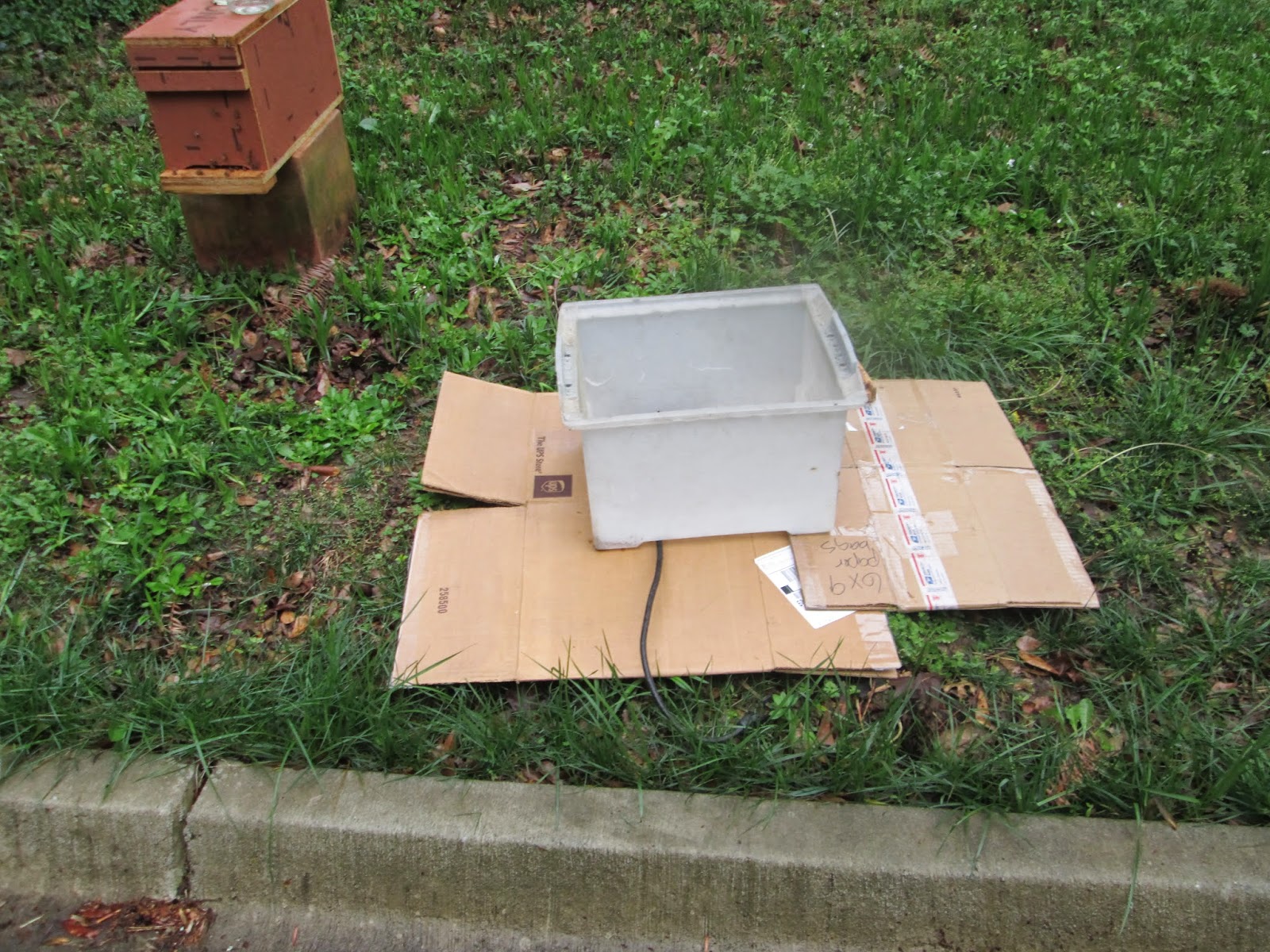 I tapped the swarm branch at least five times and bees still remained encircling the high branch.  I looked at the frantic bees flying near my head and realized there was another swarm about five feet over my head!  I went after that one several times as well, and got most of the bees. 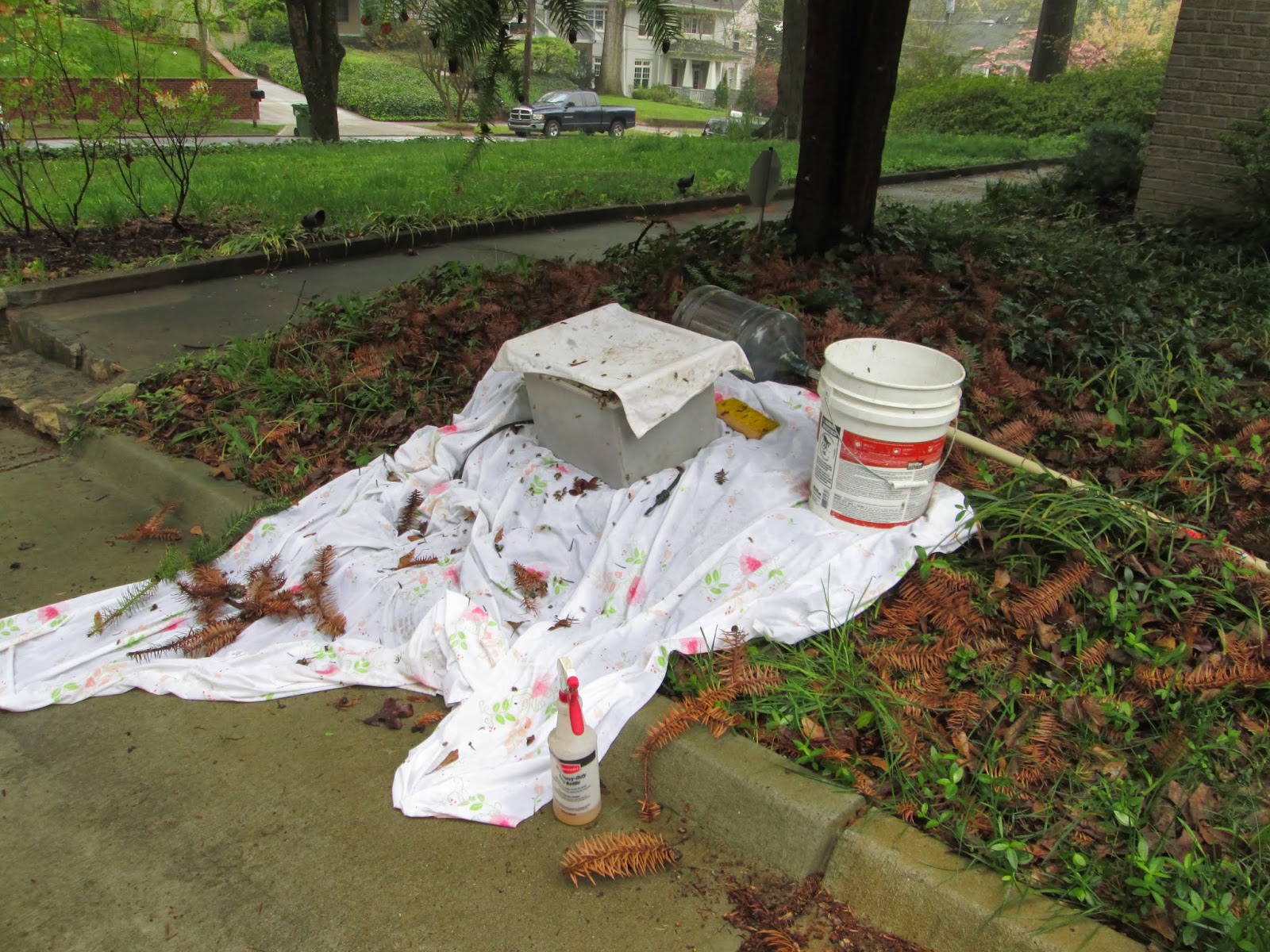 When you collect a swarm, you know you have the queen when you see the bees raising their rear ends into the air and emitting nasonov to announce, "The Queen is here! The Queen is here!"  This was not happening and I felt discouraged. There were still hundreds of bees in the two tree locations and I was getting tired, getting close to two hours into this. 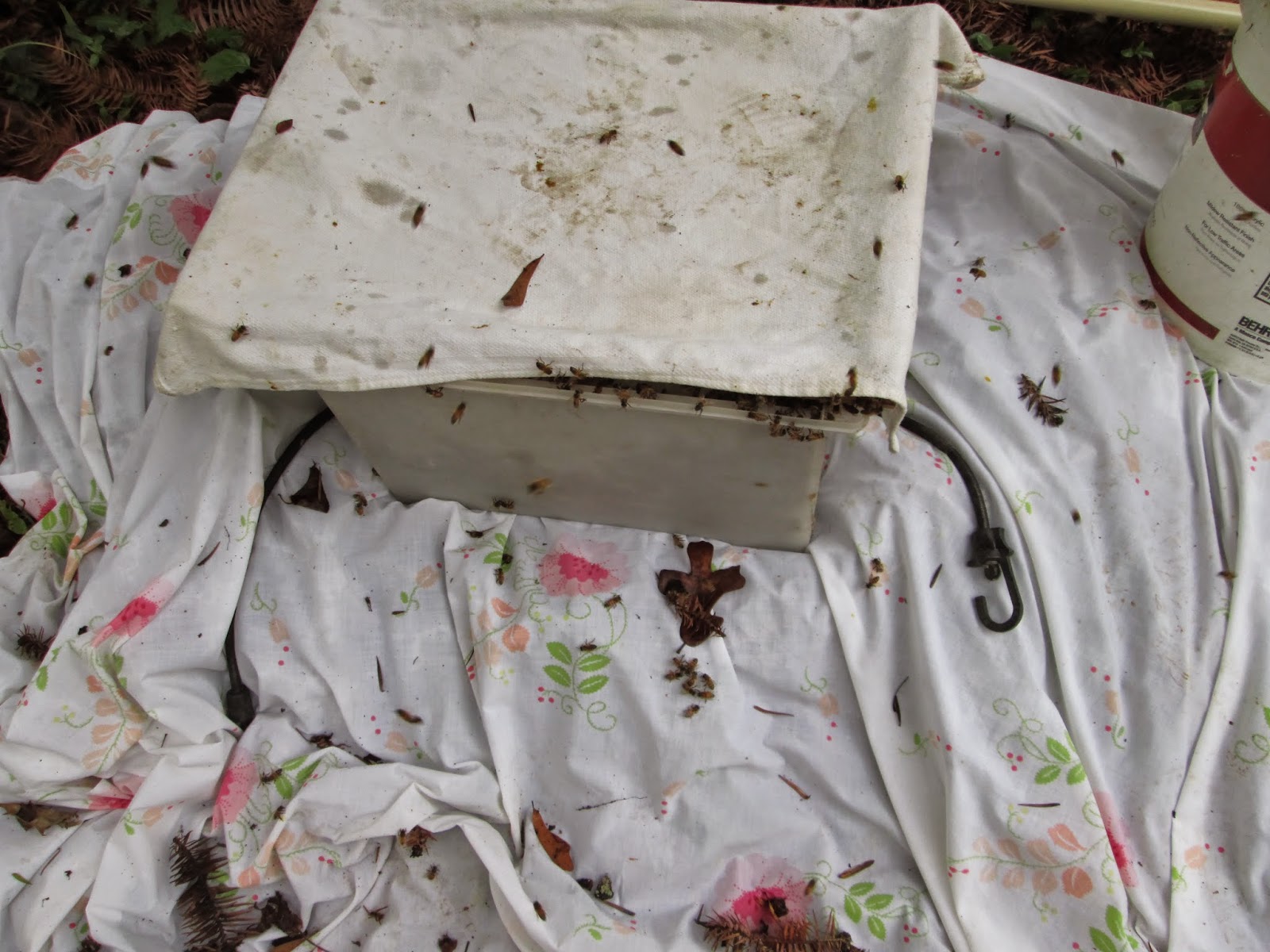 I looked around and my eye fell on about six bees on the edge of my plastic bucket I had brought with smoker fuel in it for later in the day. I had emptied it to try to use it to collect the small swarm on the lower branch. It was an unsuccessful attempt, so I had set it on the edge of the sheet.

As I looked closer, I realized that on the edge of the bucket was the QUEEN with about five bees in her retinue!  I didn't pause to take a photo; I just dumped her and her five companions into the plastic box. In ten years of beekeeping, I have never seen the queen in a swarm.  I was so excited!

As if by magic, suddenly everything changed.  The bees began making their way into the box. Bees started flying down from the high perch in the tree to join their sisters in the box. Hooray. By now I had been here two hours. 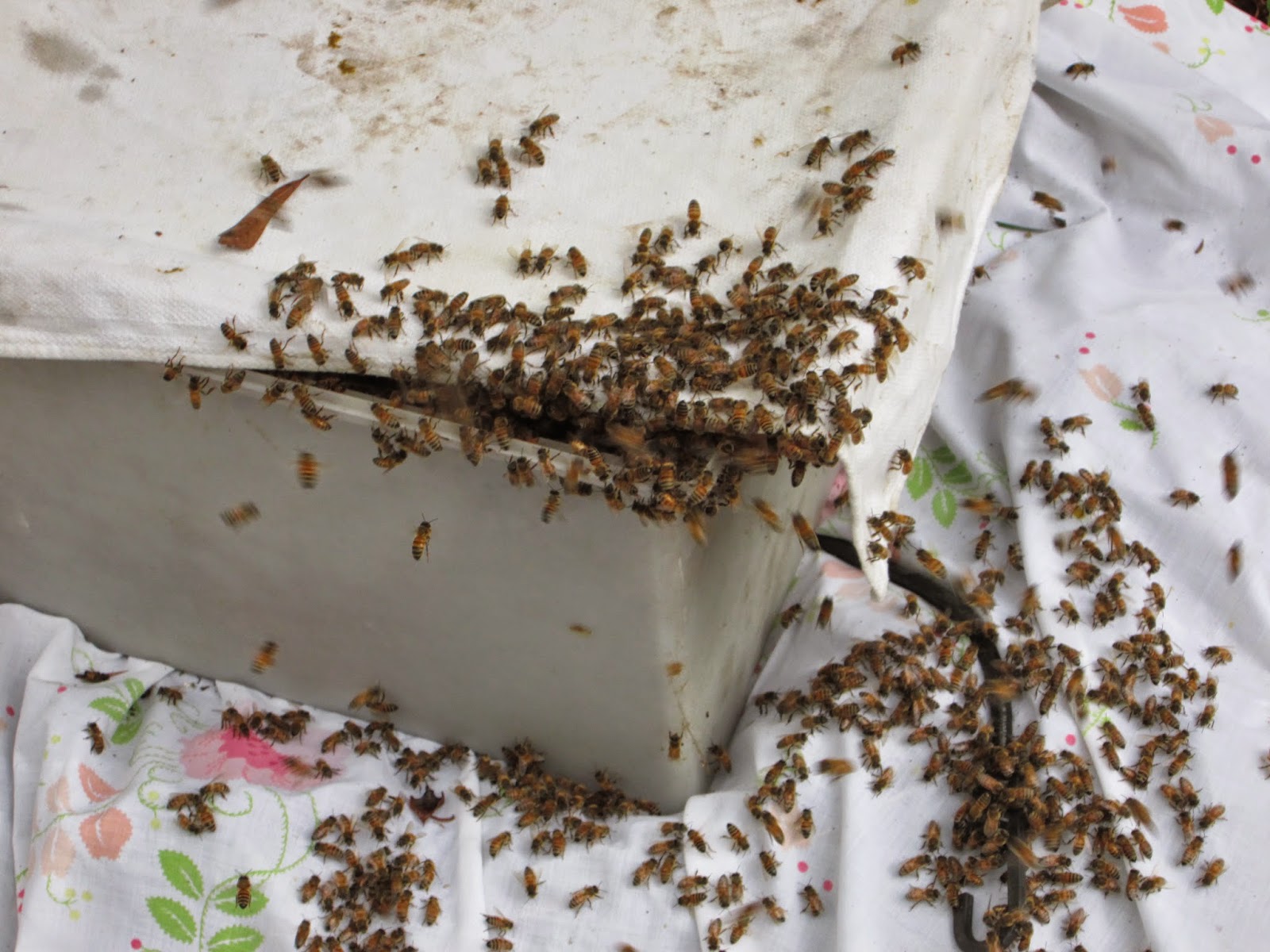 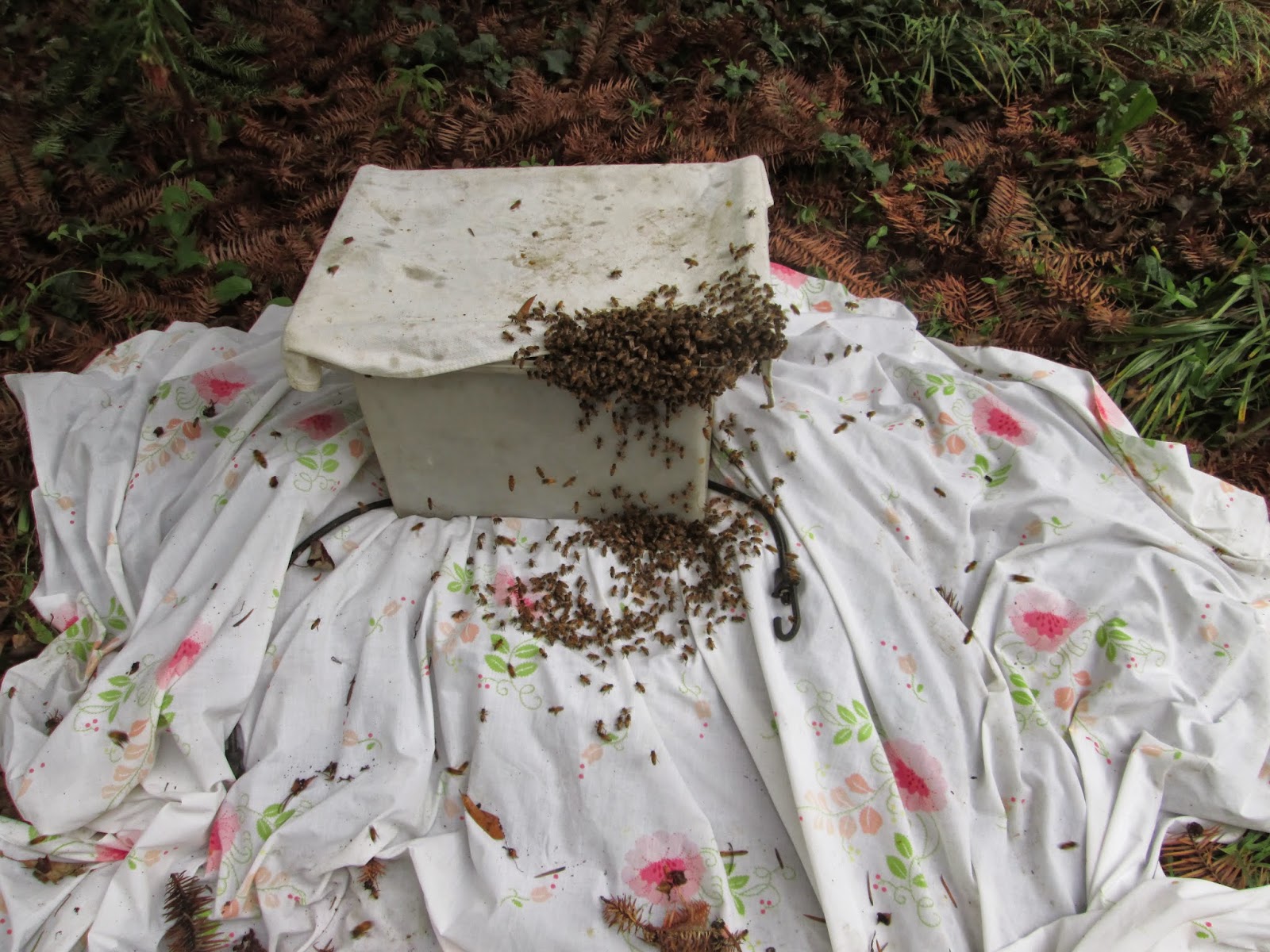 At this point almost all the bees had left the tree, so I brushed most of these bees into the box, attached the ends of the bungee cord and folded the sheet up around the whole thing so I wouldn't leave bees behind. 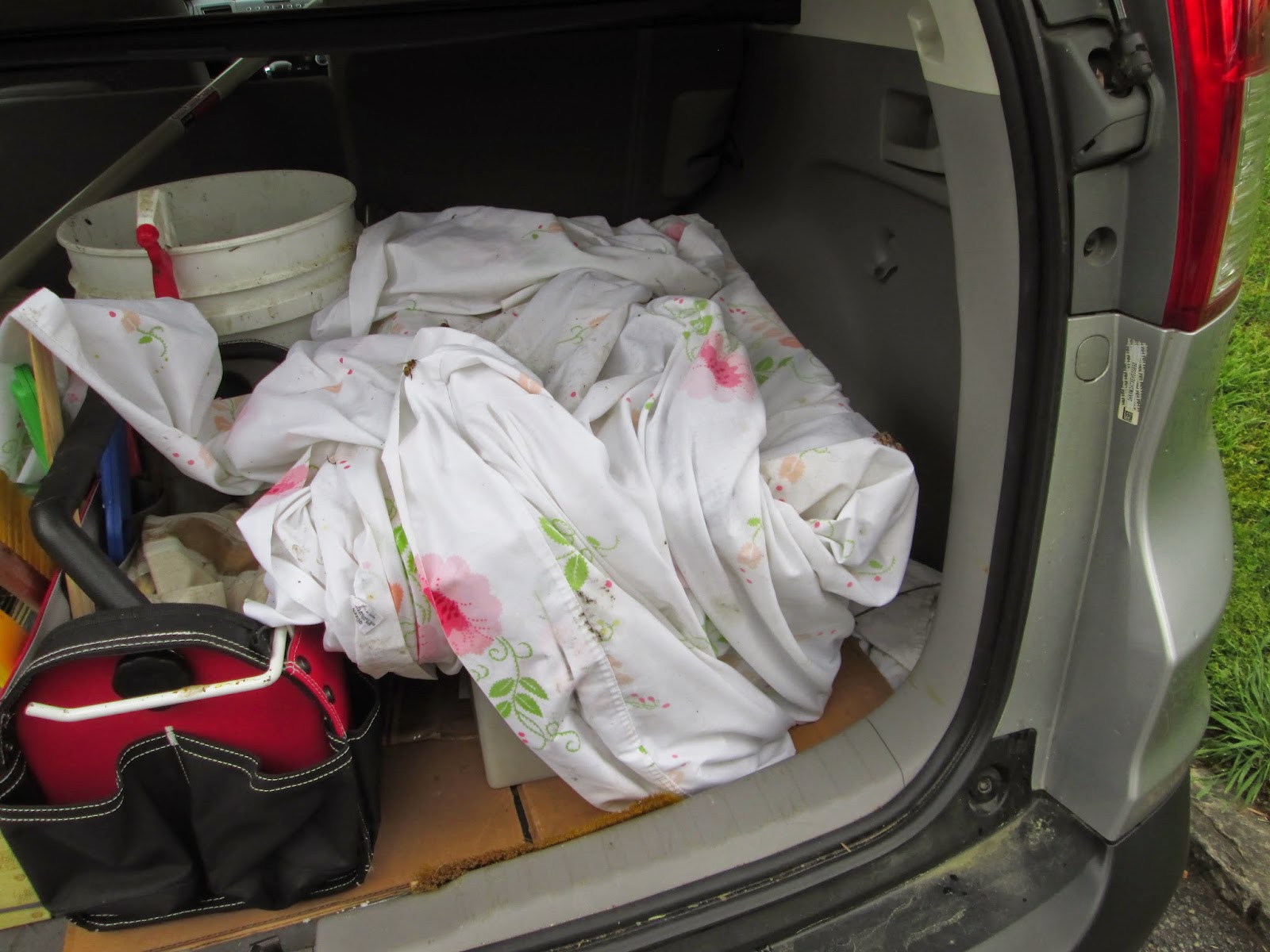 My plan was to install them at the nearby community garden where I have two hives, one still empty of bees from last year. 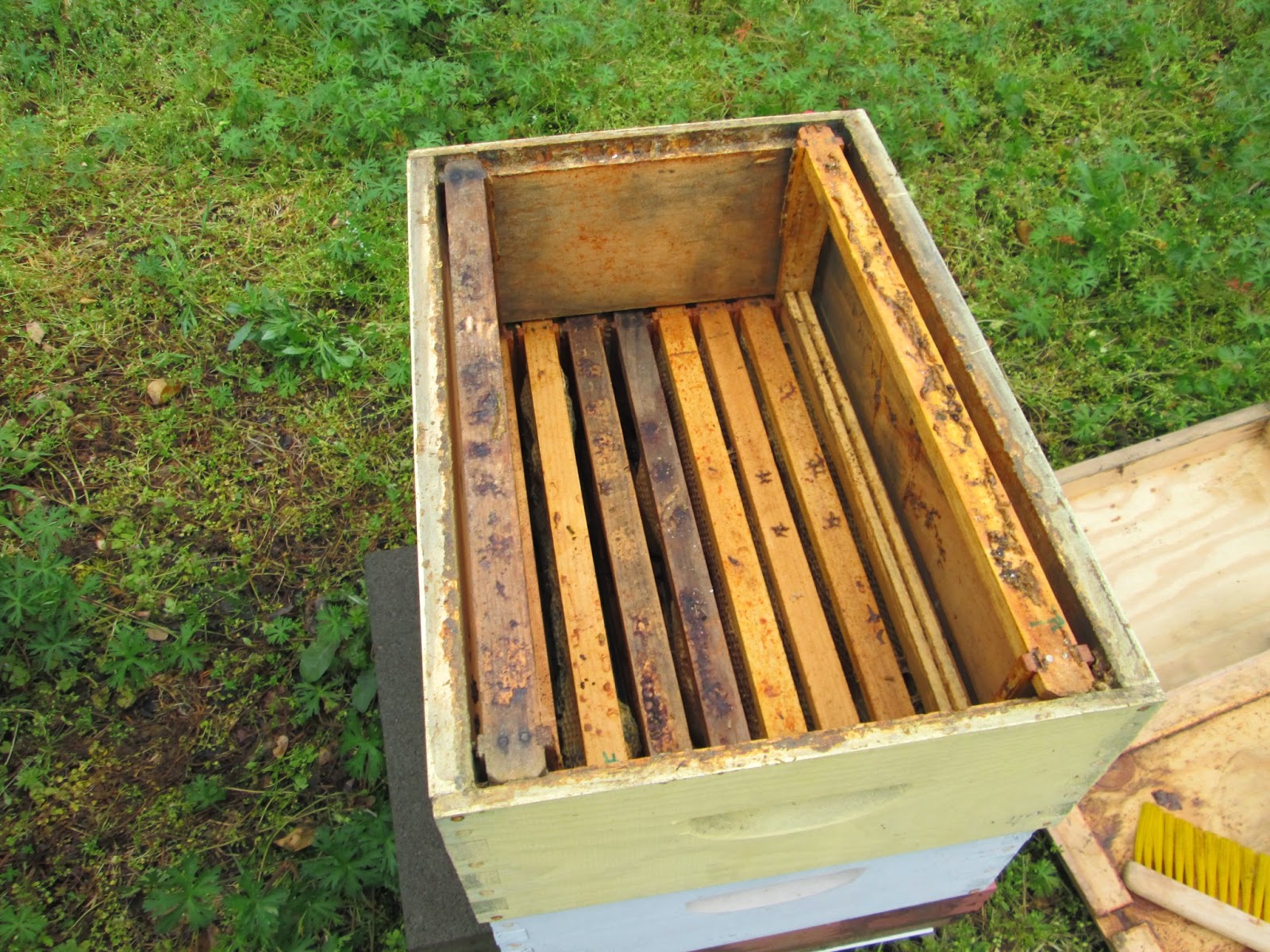 The hive was ready and waiting, so I dumped the bees in and replaced the missing frames.  I left and went to work.  The photo below is what it looked like when I left: 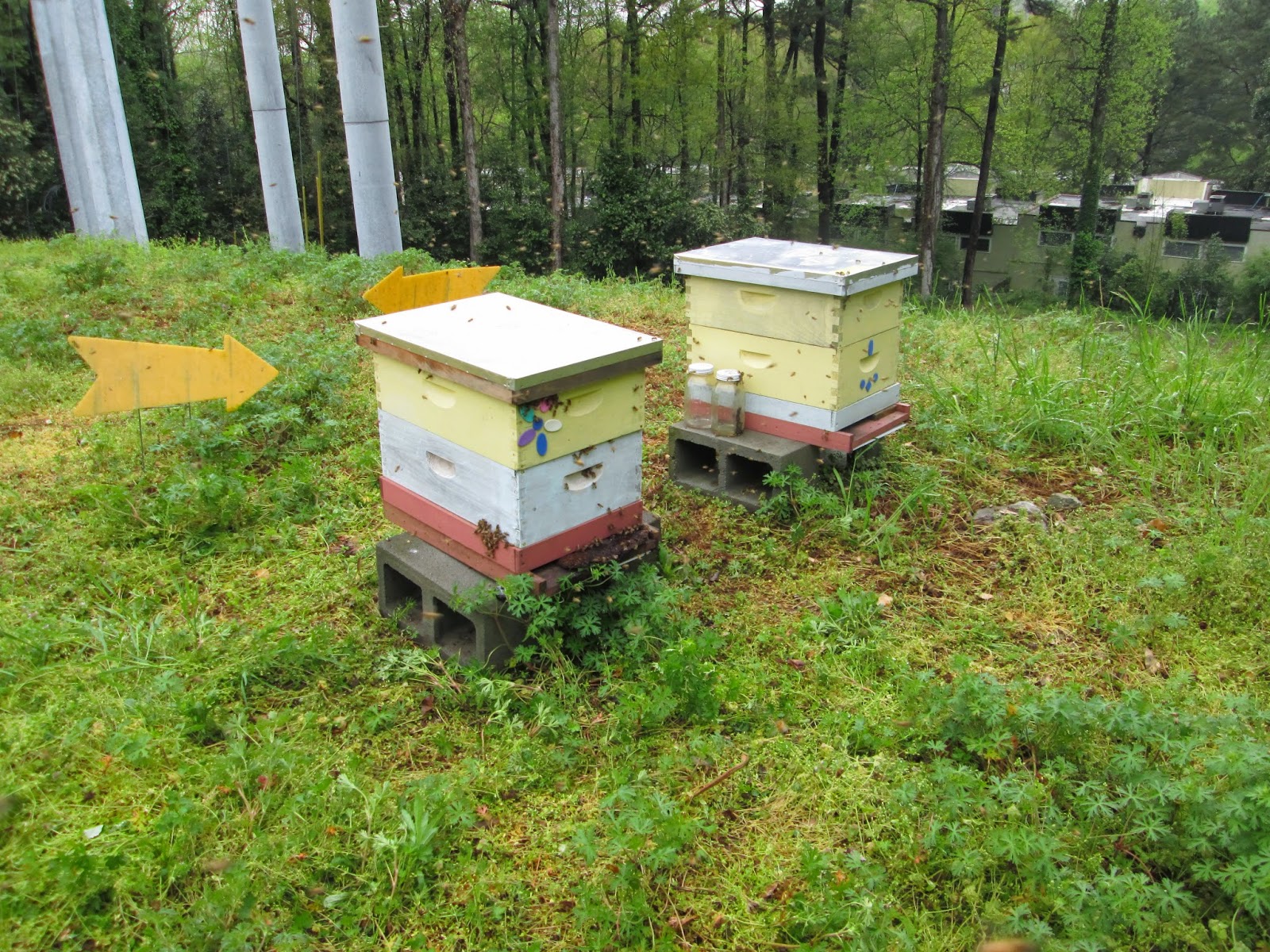 I had a break a couple of hours later, so I went by the garden to see how things were going, fully expecting to see bees orienting to the hive and happy as bees can bee.

Instead, this is what I found.  Not a bee in the hive and all of them in a swarm cluster, waiting for the scouts to find them a better home. 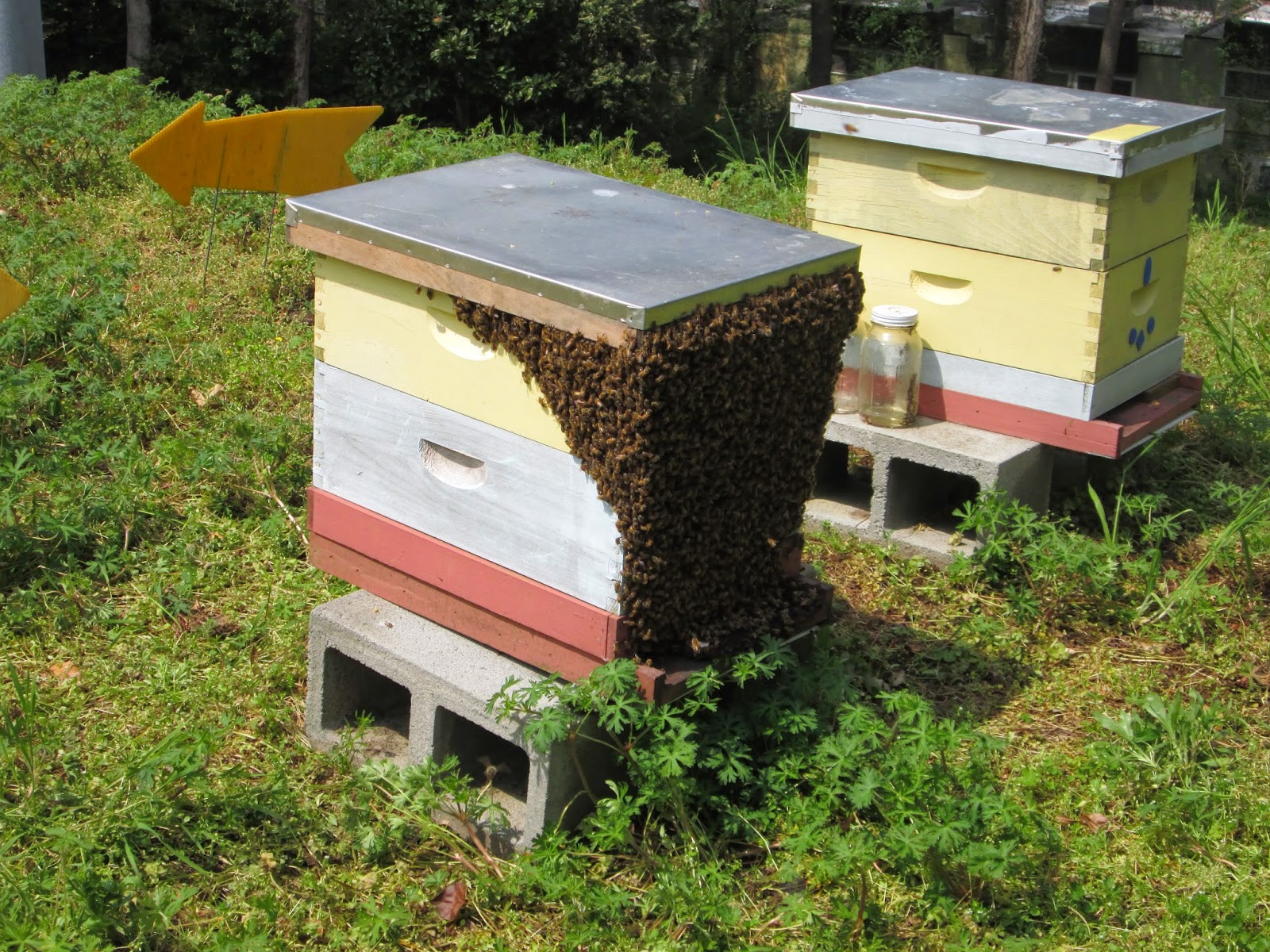 In desperation, I called Julia to find out what she would do in this situation.  She suggested that I spray them again with sugar syrup and then do three things:
Then I had to collect the swarm all over again.  So this time I spread out the sheet, propped the collection box below the hive entry, and readied the ventilated hive cover (seen to the left on the sheet). 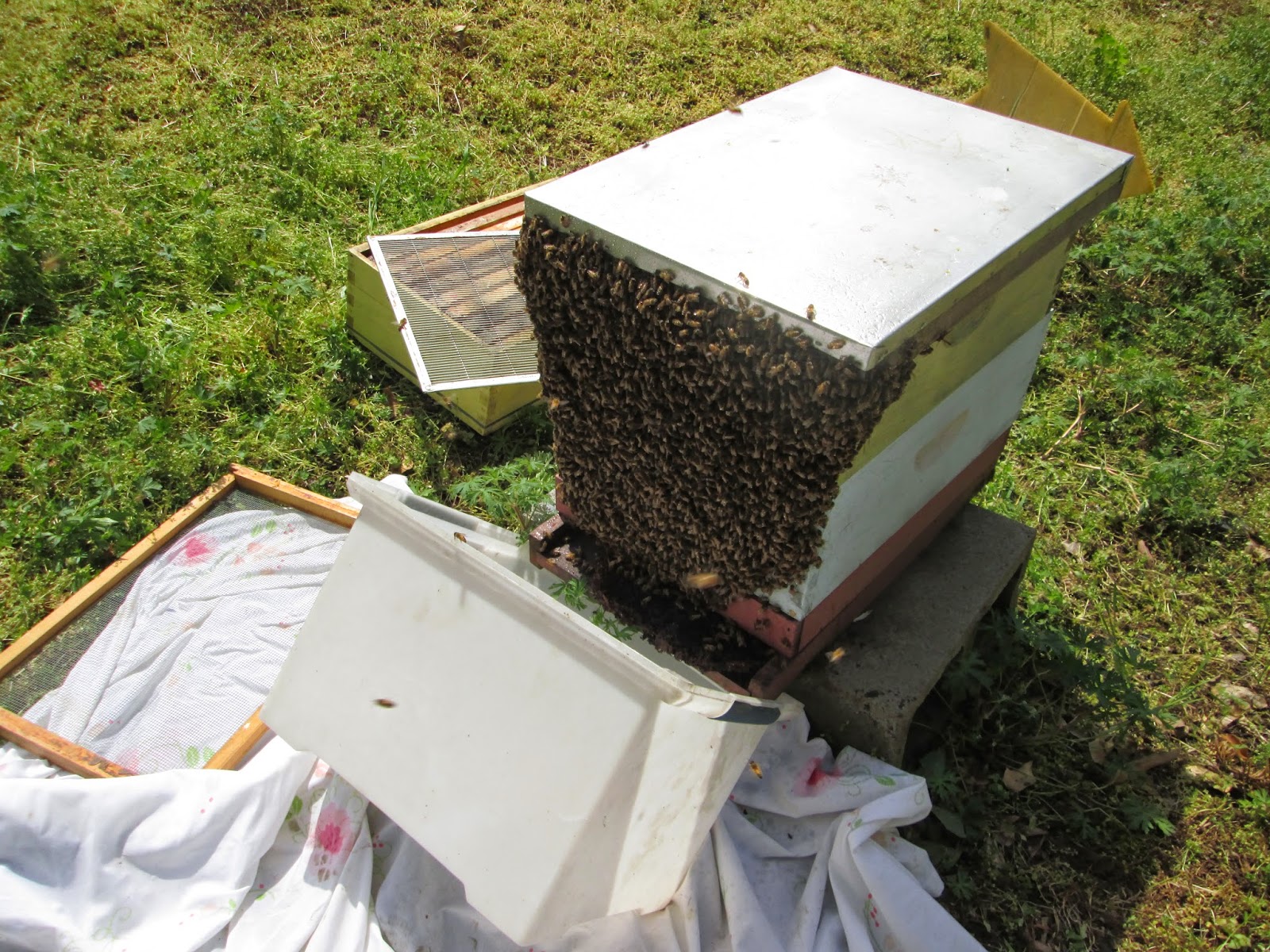 Once the bees were in the collection box, I took the hive down to the screened bottom board and added the queen "includer." Then I checkerboarded the two filled boxes, adding a third box full of empty frames. In the end, each of the three boxex had about four drawn frames and four empty frames interspersed.

When I left (to go yet again back to work) the hive looked like this with more bees going in than coming out. 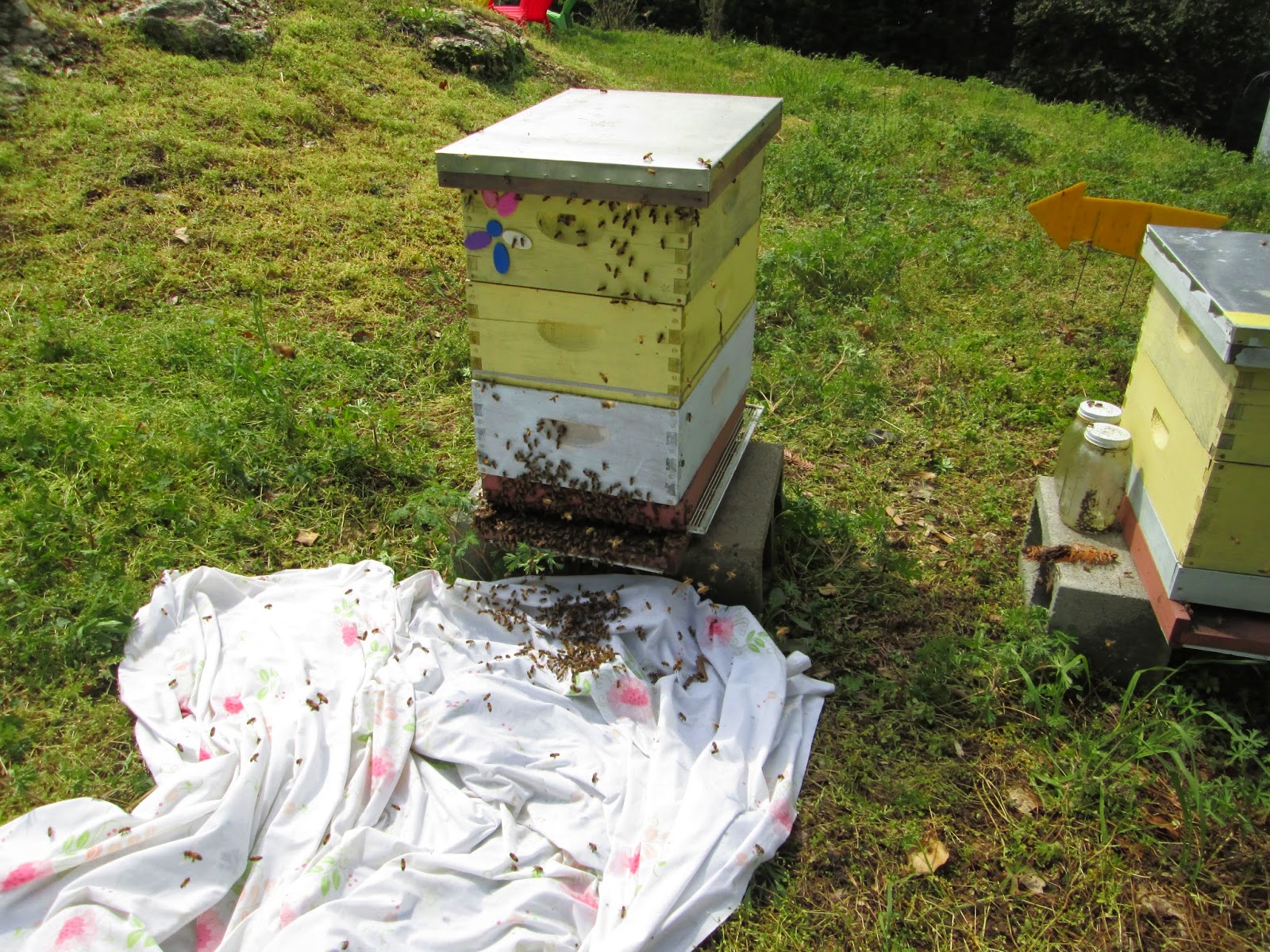 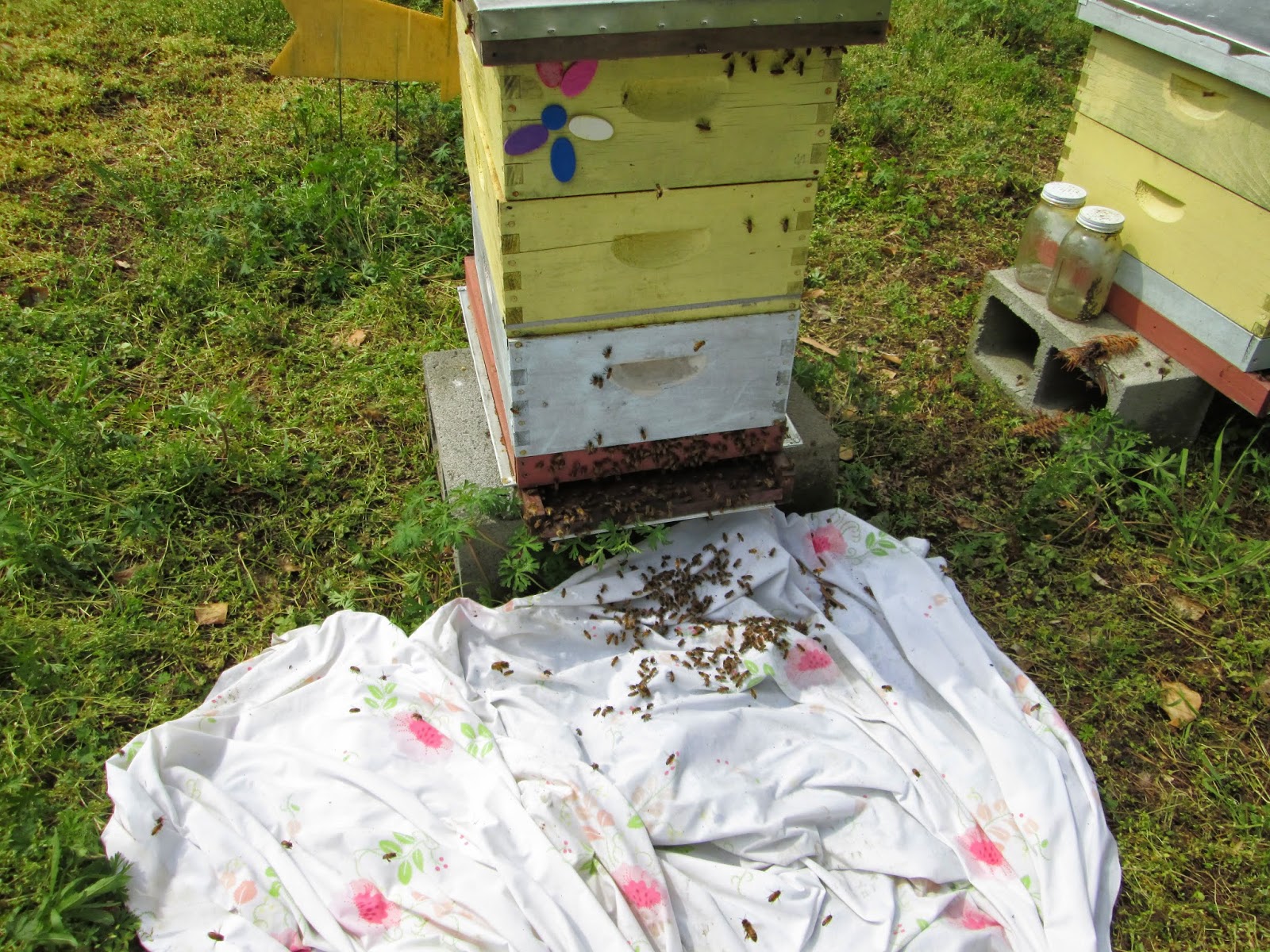 I stopped on my way home around 7:30 tonight and this is how it looked. There were a few stubborn swarm enthusiasts hanging out under the top cover, but the rest of the girls were flying in and out and orienting to the hive. 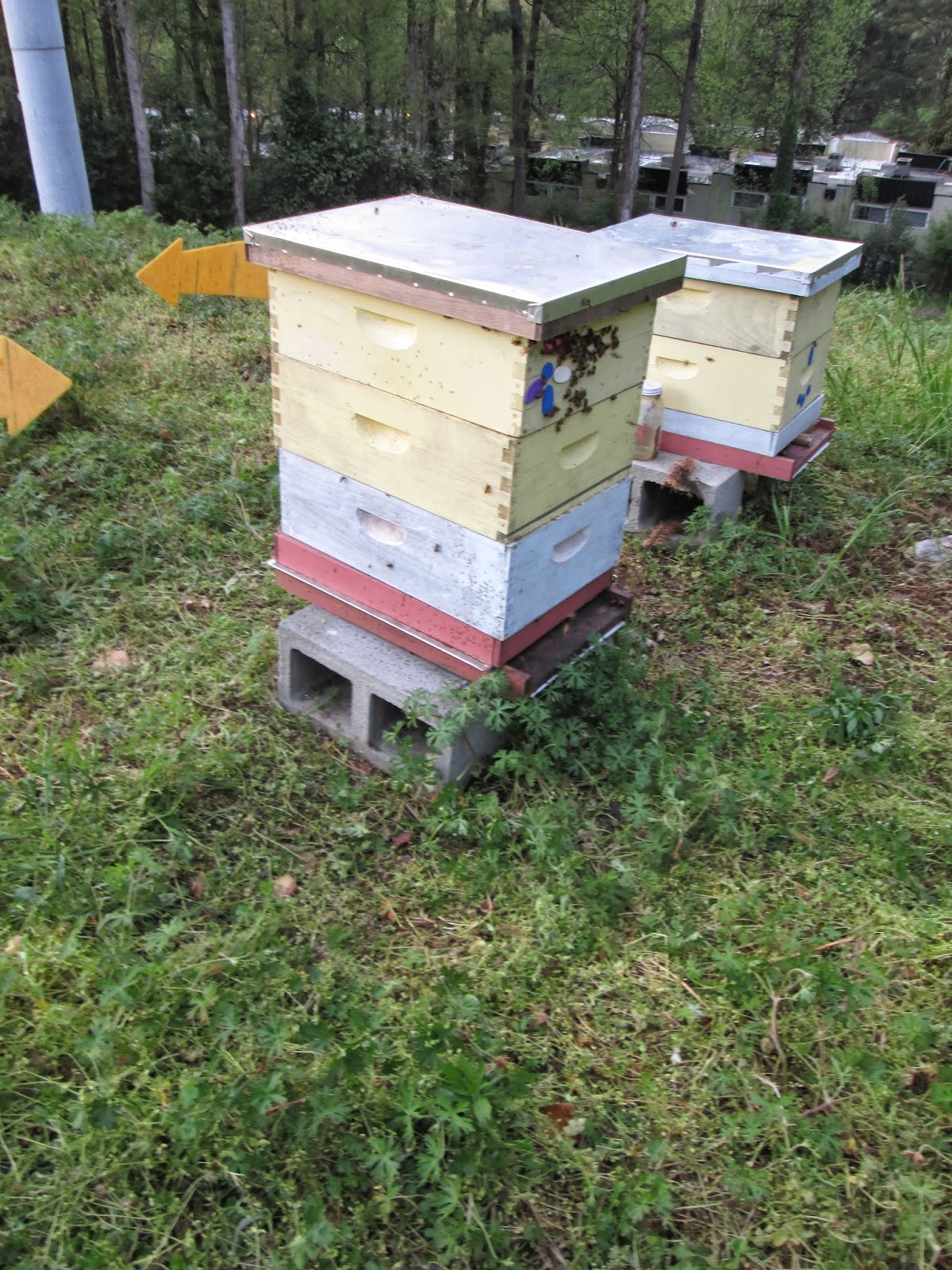 Beekeepers joke that swarm bees are "free bees. These were hardly free. I collected the swarm with great effort over and over, first from the tree and then later in the afternoon, had to collect it again. I spent at least four hours on this project during a work day (not at the office, not getting paid!)

Because I had to interfere with them so much, I got stung in the hands at least eight times. On the positive side, though, I only wore a veil - not my jacket - and only put on gloves after I had been stung a lot because I wanted to mask the pheromone so they would quit.

It was a great challenge and I had a direct experience to teach me that there is no such thing as a free lunch!

PS - since this is the third swarm the hive has sent out into the world, the queen is likely a virgin and I can't leave the queen "includer" on for a week.  Guess I'll take it off this afternoon after work or tomorrow morning.  Will call my friend Julia for more advice and consult Honey Bee Democracy and Mark Winston's book for help.

Note:  I stopped by the next day when the hive had been in the hive for 24 hours and removed the queen excluder.  I do hope the queen makes her way out to be mated.  Meanwhile in the next few days I'll probably put in a frame of brood and eggs from one of my survivor hives to be sure.