In a tree there is no queen excluder.  Bees in the wild build where they want to and the queen is free to wander in the comb and lay where it suits her.  However, humans are always wanting to bend nature to meet their convenience.  The queen excluder is no exception.

It was developed for the convenience of the beekeeper.  In the time of honey harvest, the queen excluder insured the beekeeper that he/she could remove the top boxes of the hive (honey supers) and be almost guaranteed that the queen would not be removed with the boxes.  I can imagine that for the commercial beekeeper, this is essential for efficiency in the honey harvest.

However, those of us with less hives than a commercial outfit have the luxury of respecting our bees and their process in the hive.  We can employ an unlimited broodnest for the better functioning of our hives and deal with where the brood is come harvest time without needing to simply pull off the top boxes for harvest as the commercial beeks would do.

The beginner kits I bought when I started beekeeping ten years ago each came with a queen excluder so I have two queen excluders. Since I don't want to exclude the queen from the hive boxes, I have found three good uses for the queen excluder and want to share them with those of you who have never used yours.

1. The queen excluder is the perfect drain rack for draining cut comb honey. 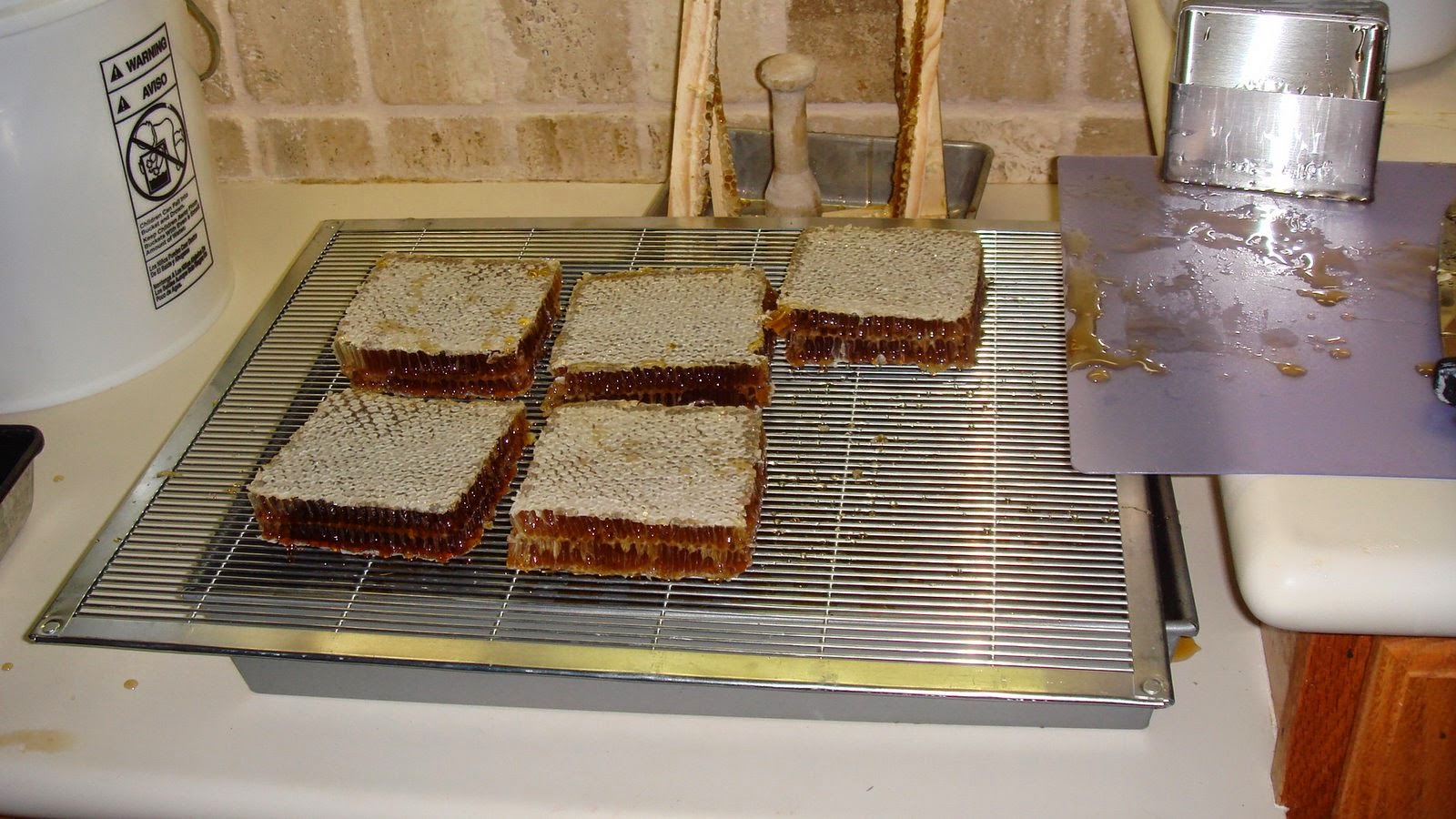 The spaces between the wires are small to keep the queen from being able to push her enlarged abdomen through (excluding her).  As a result they are relatively close together compared to a cake cooling rack. On a cake cooling rack, the distance between the wires is much wider and if you put cut comb honey sections on that kind of rack, indentations are made in the honeycomb. If you want your cut comb honey to be show quality and pleasing to the recipient, it should not have wire indentation marks in it, and the queen excluder is your answer to this potential problem!

I can't find the name of the physical principle that defines the above distribution of weight - if anyone knows what it is, please put it in a comment or email me.  A kind anonymous soul has answered in the comments below:  Pressure = Force/Area!  Thanks so much for letting me know and say the appropriate thing here.

The forum members suggested that I put a queen excluder between the two boxes and leave them for a week.  At the end of that time, if there were new eggs in both the top box and the lower box, then I would have a queen laying in both boxes. 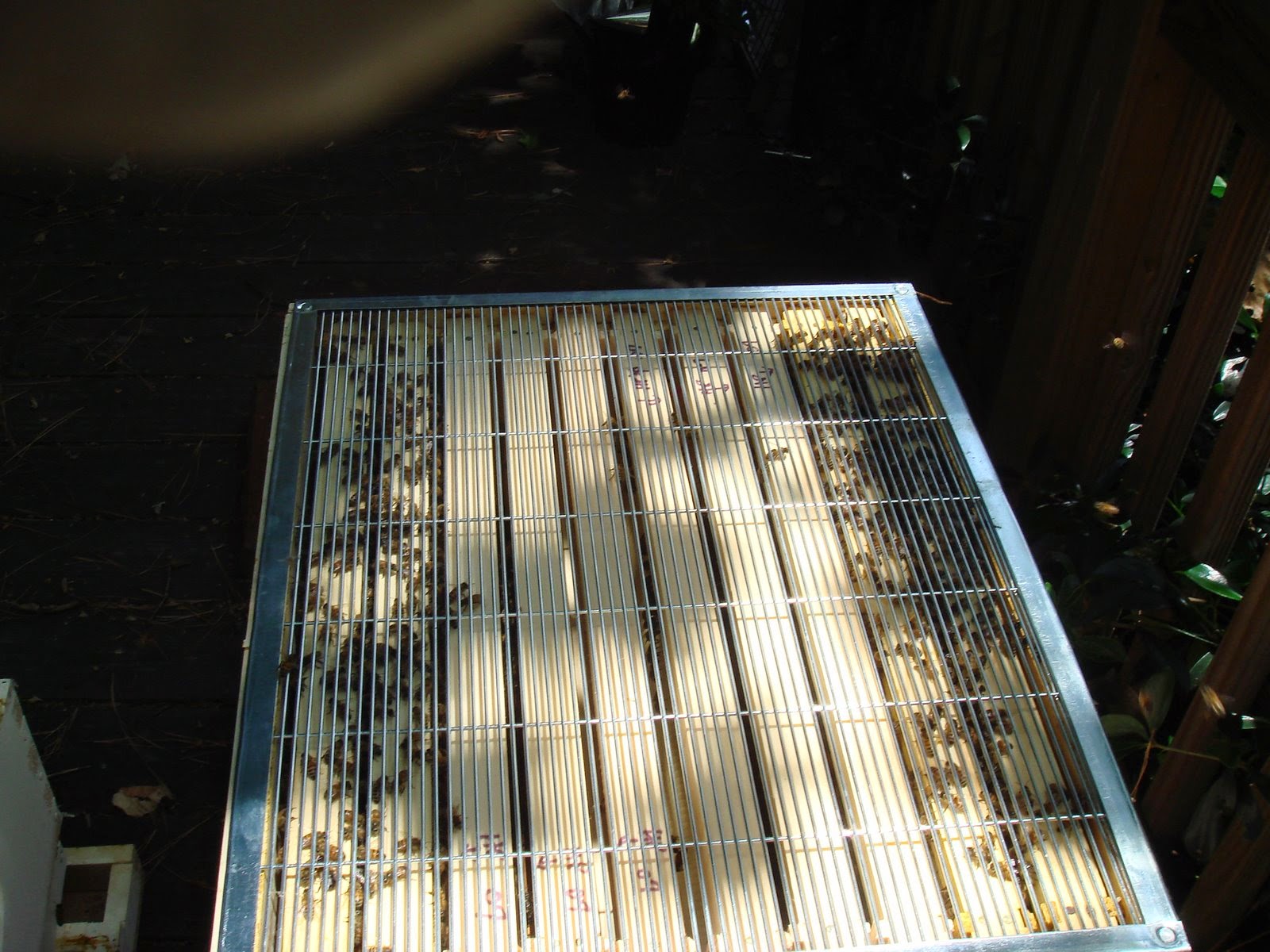 I did it and in fact there were two laying queens in the hive.  So the second use of the queen excluder is to prove that there are two queens in a hive.

While there are several ways to do this, I'm going to share the easiest one. The simplest way is to take the frames you want for the split out of the hive and shake or brush every single bee off of them.  You will be taking a couple of frames of brood and eggs so that the new hive can make a queen. Then put the queen excluder on top of the top box in the hive.

On top of the queen excluder, put an empty hive box and fill it with the five frames you have pulled and shaken free of bees. Don't put any other frames in that box. On top of that box put the inner cover and the top cover and leave the hive for the night.

The next day, the brood frames should be covered with nurse bees who have come up to make sure the brood and eggs stay warm enough, and you can move the five frames into their own box with no fear that you have accidentally taken the queen. Simple nuc, simply made.

I'm sure there are other good uses for the queen excluder beside the traditional one of separating the queen from the honey supers. I'd love to hear how you repurpose this device!