Applying Nematodes to Get Rid of Small Hive Beetle

In the middle of May, I was contacted by someone who had bought a house about 20 minutes from me. Her house came complete with chickens, koi fish in a pond, and four beehives. She had found a home for the chickens, don't remember about the fish, but she had four beehives, three of which contained bees. Leslee asked me to help her with the bees. "I love all creatures and hope to keep these bees healthy," she said.

When I went to her house, the hives clearly had been neglected for probably two years. One hive was small with a large population of small hive beetles. The other two looked like they were busy and being productive. 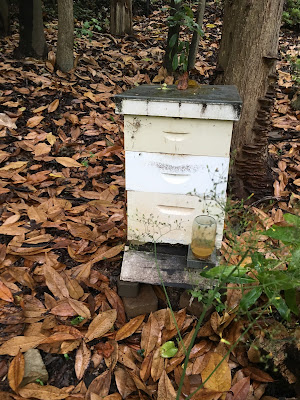 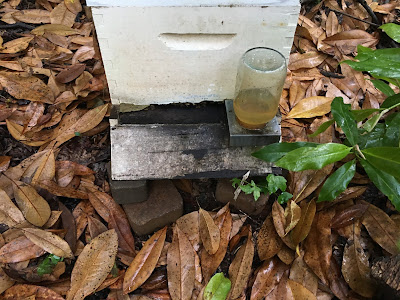 This hive was isolated away from the other two.

On one of the hives the area around the feeder smelled just awful. I couldn't imagine what it was. Then I returned a week or so later to take the hives apart and really inspect them. When I did, the hive with the smelly feeder area was quite interesting. In that deep bottom box, behind the feeder was a very nasty smelling area in a perfect rectangle. The bees had left empty the three frames immediately above the nasty liquid.

This house had been for sale and I wondered if maybe one of the realtors showing the house had sprayed poison into the hive in that area to try to kill the bees (and sell the house more easily).

I removed the feeder, took out the three empty frames and cleaned up the area. One of the four hives was empty and I didn't want to put a box that had poison in it back on the hive. I removed the box completely. I had brought with me a ten frame bottom board and slatted rack. I took two deeps off of the fourth failed hive and got rid of the poison-filled box. I didn't have deep frames with me, so I substituted three medium frames. It won't matter. The bees will build comb below the bottom bar. I've done this before in other hives.

Below you can see the hive with its new slatted rack. The removed frames are on one side of the hive and the feeder is off to the other side. The hive has two deeps because I needed space for these bees and that was all that was available, left from the previous beekeeper. 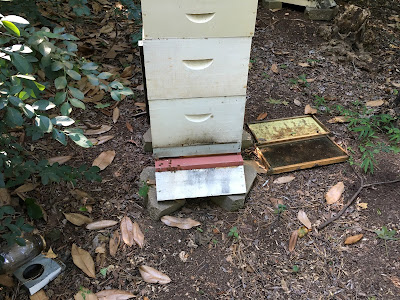 The third time I visited these hives, the small hive in the photo above had absconded and was completely overrun with small hive beetles. These three hives are on a tree-covered ridge and are totally in the shade. What a mess - all the comb smelled like orange crush and the honey was slimey. I closed the hive up and worked on the other two instead.

I ordered nematodes from Southeastern Insectaries. I've had a previous experience with these - it's truly an act of faith. The beekeeper can't see the nematodes, but the instructions say to stir them to dissolve them into water.

So I followed the instructions to the letter: 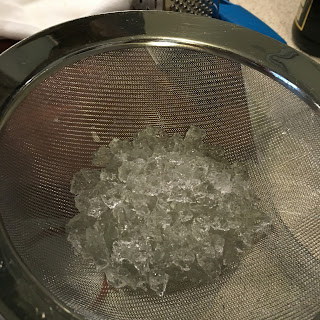 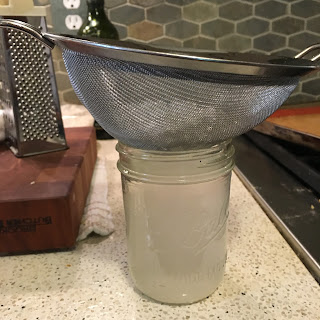 The cloudy liquid in the pint jar represents the dissolved nematodes 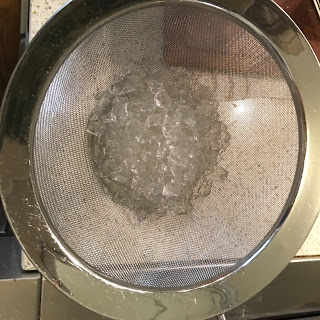 The well-rinsed gel looks like this - all of the nematodes should (who knows?) be in the water! 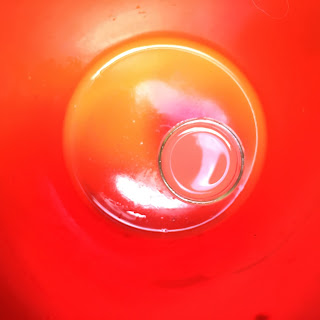 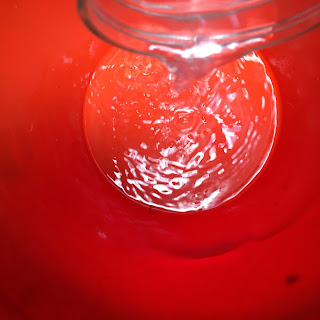 Never removing the jar from the bucket, I opened its top there and then poured the nematode solution into the bottom of the bucket. Then I added water with the hose and stirred the invisible little creatures with a long-handled wooden spoon. (The instructions say to stir frequently because the nematodes tend to sink to the bottom - I'd never know, so I stirred like mad!) 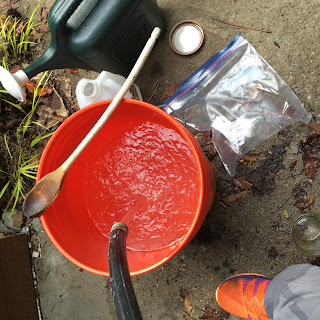 I had a half gallon empty milk carton with me so I used it to fill my sprinkler can. 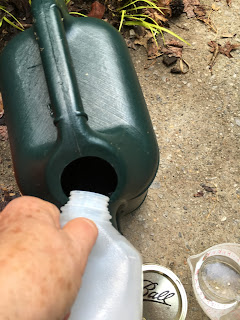 Then I poured the water with hopefully well-stirred nematodes all around the hives and around the old hive locations on the hillside. 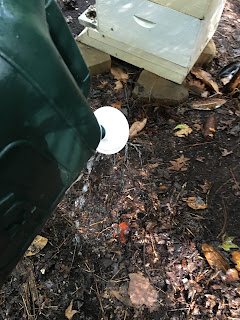 BTW, before I left, I photographed the two living hives. This photo shows you the impact of the slatted rack. The closest hive has one, the fartherest one does not. 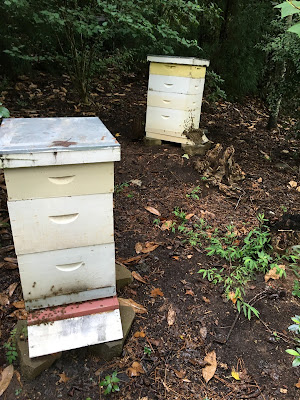 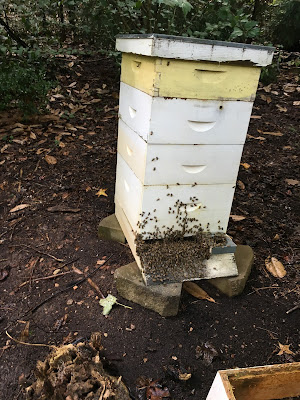 Close-up of the non-slatted rack hive. I can't say enough for the slatted rack. If I can find another 10 frame slatted rack, I'm bringing it over. These hives are so heavy with the ten frame boxes that I don't dare try it by myself. I'm spoiled by eight frames! I always bring Jeff to help me on these large tasks!

Working with bees that were started by someone else in their equipment is quite the adventure. We have no idea of these bees' history. Where did he get them? He apparently built his own equipment. Part of the reason the hive boxes are hard to lift is that the hand holds are very shallow, much more so than my commercial boxes. The previous beekeeper left it all behind. He left his beesuit, his smoker, his frame lifter and his hives. At least Leslee will be able to use those things.

Email ThisBlogThis!Share to TwitterShare to FacebookShare to Pinterest
at 9:29 PM