Starting on June 21, the summer solstice, the queen slows down her laying and continues this decrease until the winter solstice in December. So in Georgia, where we generally harvest all the honey we are going to take by July 4, the queen also doesn't lay as many drones as she did pre-June 21.

Making post-harvest splits is a fine procedure, but you do need to know that your new queen, assuming you let the bees make their own, may not be well-bred when she goes on her mating flight...less drones, less opportunity. So when I do make splits in July, I hold my breath until the new queen proves herself.

I moved to a new house in June and moved my bees at the very end of June to their new location. I had planned to split one of the hives to put a new hive of bees in my daughter's yard where the swarm we housed had absconded. My bees needed to adjust to their new location before I interfered and split them so I went to the mountains for the month of July, planning to cross my fingers and do a split when I returned.

As luck would have it, I came home for three days in mid-July, so while I was in Atlanta, I made a split for Sarah's yard on July 13. It was a tiny split - a frame of brood and lots of eggs, a frame of pollen, and a frame of honey and brood. That was it. I housed it in a medium box and crossed my fingers. I put a Boardman feeder on top of the inner cover, filled it with sugar syrup, and surrounded it with a deep box.

A split in mid July provides a brood break which is a natural beekeeping IPM method of varroa control, so it helps the new hive stay healthy. Since our first frost is in mid-November, they had a good head start on building up for winter with a laying queen. I will, of course, make sure they are fed up until then. If the hive can make it through the winter, there's a good chance it will come into spring strong with a big population.

When I returned at the end of July, I exchanged the Boardman for a rapid feeder surrounded by a medium. There were plenty of bees (clearly some of the brood on those three frames had emerged) and the hive was calm. I didn't go into the hive for fear of ruining a maturing queen cell as I lifted a frame. 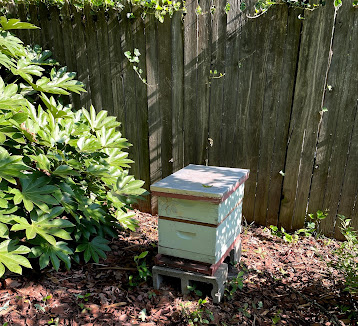 Sarah has kept the feeder full of sugar syrup which the bees have been devouring. On August 5, I returned to the hive to add a box. I didn't want them to backfill all of the laying space with syrup and I wanted to see if they had a laying queen by now. The split was twenty-three days ago and she should be laying, if she was able to survive and get mated.

The first good sign as I arrived at the hive was that bees were carrying in pollen on their legs, often a sign of a laying queen. Not a great picture, but the bee on the left in the photo below has pollen on her legs. 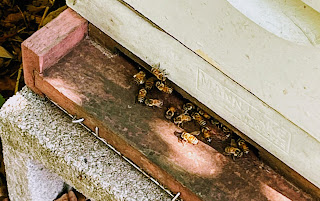 The hive was still using about three frames for brood raising and the rest for storing syrup. I started the inspection on the side of the hive fartherest from the activity in the hive. Five frames were being used for syrup storage - only one was filled. The sixth frame had tons of eggs on both sides of it. You can see the frames on the occupied side of the box in the photo below. 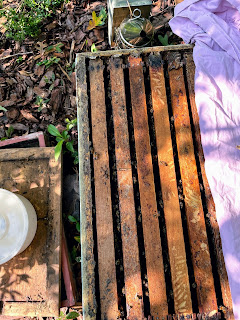 I added the box, closed up the hive and celebrated! 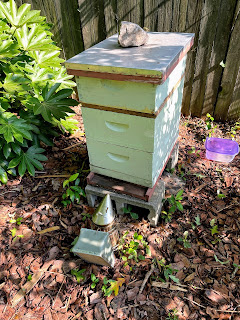 Email ThisBlogThis!Share to TwitterShare to FacebookShare to Pinterest
at 4:19 PM