Honey shows are a challenge for me because my essential tremor makes it difficult to get a honey jar perfectly ready for presentation. So I rarely enter honey in honey shows any more, except for black jar contests. But most honey contests have other aspects - wax, crafts, baked goods, photography, etc.

This year for my home club (Metro Atlanta Beekeepers) a friend of mine and I were in charge of the food for the potluck and honey show on Sunday the 18th. It's a busy job and requires organization, getting the plates, silverware, drinks, etc and the main dish - usually barbecue or fried chicken - for the event. With all of that, I had decided not to enter anything this year.

But then Saturday rolled around and I had nothing to do so I decided to spend the day baking. I baked honey whole wheat bread twice because I didn't like the taste of the first recipe which was a steel cut oat honey bread. I switched to a rolled oatmeal bread which I liked better from Beth Hensperger. I also baked honey wheat germ cookies (a Dorie Greenspan recipe) that are delicious. And finally I baked a David Tanis recipe for an apple honey cake.

The honey oatmeal whole wheat bread won a blue ribbon (and $100). The judge suggested that it needed a stronger honey taste. I had used a mild honey and will use a stronger tasting honey the next time. 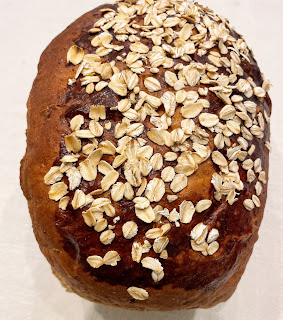 The cookies, which were competing with a gorgeous honey tart with kiwi slices decorating it that had been cut into honeycomb shapes and bees made of thinly sliced grapes - an amazing creation, didn't have a chance at a first place ribbon but came in second ($50). I was pleased because I didn't expect them to win. They are delicious as any Dorie Greenspan recipe. I'll make them again and video it for my YouTube recipe collection. 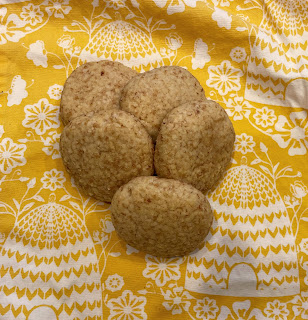 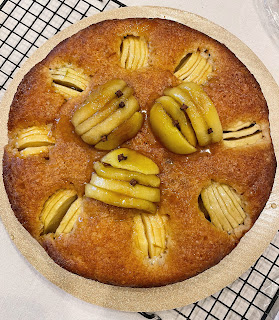 This cake won first place ($100) and then Best in Show ($250)! The judge wrote "OMG! Praise only praise! Exceptional" on the comment card. I was bowled over. I've entered honey contests pretty much annually since 2007 and have never won Best in Show. The judge left before I could speak to him - Brutz English - he has judged all over, including in Ireland. I texted him to say how much it meant to me to get best in show. He called me this morning to say that of all the many cakes he has judged over the years, this one was absolutely one of the very best.
You should try the recipe. It has candied ginger as well as fresh ginger and apples in it along with the honey and the flavors permeate the cake. I baked it in a 10 inch springform pan since the baking seemed to be uneven and to take longer in the recommended 9 inch pan (from the comments). Mine was done in exactly 45 minutes.
I hadn't even tasted it, so I ate a piece for breakfast and it is DELICIOUS! If you want to truly feature honey as an ingredient, you should try baking this.

Email ThisBlogThis!Share to TwitterShare to FacebookShare to Pinterest
at 10:25 AM