"What's in a name? That which we call a Rose by any other name would smell as sweet."

This quote is from Shakespeare, Romeo and Juliet.

I've been thinking about this all morning since I opened the hives today to see how the honey supers were looking. What's in a name? Well, maybe a rose by any other name would smell as sweet, but I've been struck all day by how like their names my hives are behaving.

Last year I was into the beehives as leisure activity (what was I thinking???) and named my hives for vacation destinations. The hive that barely survived through the winter was Bermuda.

Bermuda, the country, is only 22 miles in length and 2 miles in width - quite a small piece of land. If I were to drive (I usually take MARTA) to the Atlanta airport from my house inside the perimeter around Atlanta, I drive 26 miles - farther than the entire length of Bermuda, the small country.

So my hive Bermuda, lives up to her name and is quite small. I'd like to give her an extra frame of brood but since I haven't yet switched to all medium boxes, the brood I have available from other hives is all on deep frames.

So Bermuda is growing very slowly. This bad picture is of a frame in the second box that the bees have finally drawn out and the queen (see middle of picture wearing a white dot) is laying well. But the hive is so small that today I put an entrance reducer on it to help them maintain their forces. 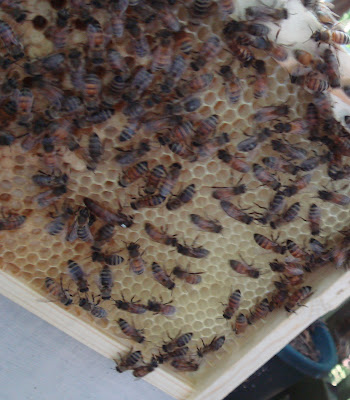 The hive that drew the crazy comb is named Proteus. I named the hive Proteus because the Greek god Proteus saved the lives of bees, but he had another characteristic - he was a shape-changer.

So in this hive the bees refuse to build straight comb. The comb is never the shape it is supposed to be.

Michael Bush said that sometimes you can't get bees to draw straight comb. I think he must be right because the bees in Proteus take after their namesake and are continuing to draw crazy comb. I got them to stop it in one box which is now filled with beautiful capped honey, but in this their new box, they are still making bridging comb between frames (see the pieces in the frame below). Wikipedia gives all kinds of shape-changing references for Proteus. Perhaps I should have researched further before naming this hive in a way that suggests the bees will be shape-changing with the comb! 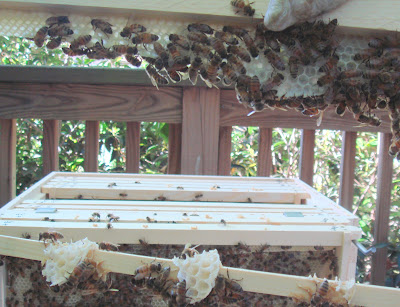 And finally there's Mellona, named for the Roman goddess of bees and beekeeping. Blessed by Mellona as this hive is with her name, the bees are quietly and methodically making wax and honey, busy as bees.

They are currently building up their fourth box. The boxes all have been drawn from starter strips. Mellona has a beautiful brood pattern and gorgeous capped honey (see below) in two boxes and the bees are busily drawing out comb and storing honey in the fourth box. 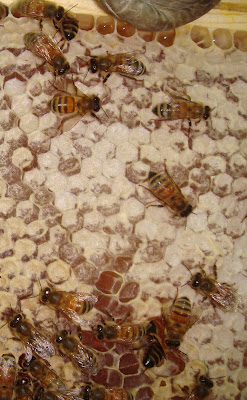 So what's in a name?

I think a lot - or in psychology we might say that this represents magical thinking on the part of the beekeeper to think that the name of the hive has influenced me to make assumptions about the bees in it. And they are fitting right into my assumptions....which is why magical thinking seems so effective!