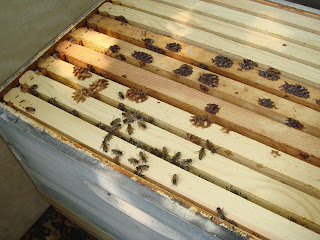 Well, as we all have agreed, the queen in this small swarm was killed by her own bees who "balled the queen" when I moved the hive and changed its position. Left queenless, the hive needed to have either the resources to make their own queen or have a queen introduced.

I decided to experiment with trying to see if I could give them the resources to make their own queen. To do this I needed to take a hive with good growth and remove a frame of new eggs and young larvae and put this in the hive. The bees will then feed the eggs royal jelly and develop one of them into a queen. With the eggs already laid, a queen should be in the hive in 16 days. Then she still must go on a mating flight and return....so the whole endeavor is fraught with failure potential.

I opened the swarm hive to find it only amounted to 3 frames of bees. I had thought the dead queen was a virgin queen and this was supported in that there was no evidence of brood in the hive frames. I called Cindy Bee, a reknowned member of Metro Atlanta Beekeepers and the Georgia Beekeeper of the year, to ask her advice. She said with a swarm this small, I could shake these bees into one of my existing hives to up the numbers. I told her I wanted the experience of trying to make a queen, and she then said for me to put two frames of eggs and brood into the small hive. She also advised that I begin the process of moving the hive to the location where I want it to 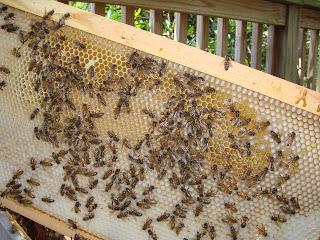 Now the drama begins! I decided to take a frame from the deep brood box of Mellona since the bees there are doing so well. I took the five boxes off of the hive. In the deep box, I could not find a frame of mostly new eggs and brood. I believe the queen in this box has moved to the box above. So mainly I made the bees mad and gave up on this hive. I did this because the new swarm is in a deep box and it would be preferable to take a frame from a deep to add to the swarm hive.

Then I went to Proteus and went into the deep. The first frame I looked at seemed to have mostly capped brood, so I decided to try another. I picked up the second one and tried to hold it at an angle to the sun to see if there were eggs. As I did this, the comb broke in half and half of the brood comb fell to the deck. Horrors! I was so upset. Honey and goo everywhere. I ran inside and got my bag of long rubber bands. As quickly as I could I rubber banded the comb back into the frame and put it back in the hive. In the process I dropped honey laden rubber bands all over the deck. I shut Proteus back up. I had done enough damage there. 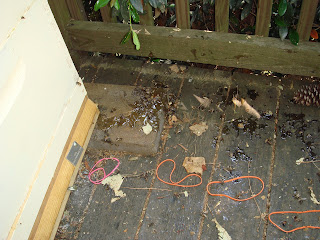 Since I was determined to make this experiment happen, I decided to look in Bermuda for eggs. This hive is all medium frames. I have always been able to see what is going on in it. Sure enough, I immediately found a frame with larvae in all stages. There was some very tiny larvae and I think I saw eggs in the cells next to that, but I wasn't willing to hold a frame up to the sun again and risk the same mishap.

I pulled two frames of very young brood from the medium and put them in to the new hive. I sprayed the bees in the hive and the ones on the introduced frame with sugar water flavored with vanilla. Cindy suggested that I do this to keep the bees from killing each other by "messing up their smellers."

Now the small hive has five frames in it - the original three deep frames and two medium frames in between that are brood and hopefully the resources to make a queen.

I do hope this all works out. What an adventure beekeeping has turned out to BEE! 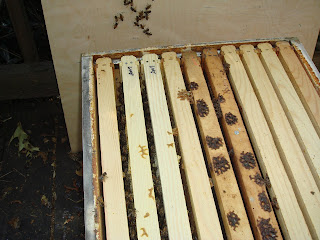