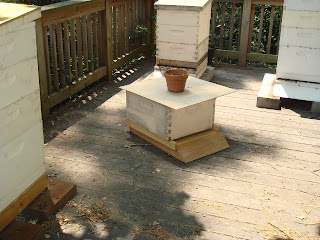 Everyone I spoke to about this small swarm told me that I would need to help the hive gradually adjust to the position I wanted the hive to be in on my deck. It couldn't stay where it started out because its location, directly in the flight path of two other hives 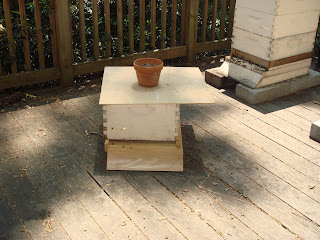 , would make it practically impossible for me to work or to inspect this little hive.

Cindy Bee and Brendhan (Understudy on Beemaster.com) both told me to move the hive at night after dark and to help the bees adjust in different ways. Cindy said to move the hive a foot every day and turn it about a quarter turn with each move until I had it where I wanted it. Brendhan said that I would need to put grass in the entrance of the hive to make the bees think a tree branch had fallen and that they needed to reorient themselves.

The first day (first picture) the hive moved about a foot and turned toward the sunporch door. Day two the hive is turned even futher and has progressed another foot toward my ultimate goal. On Day Three, it is directly in front of Mellona and facing at a right angle from where it started (90 degrees). Notice the grass in the entry. And on Day Four it is in its final position.

I added a feeder with sugar syrup 1:1 because I left for the mountains this morning and won't be back until Sunday. I couldn't resist lifting the top for a peek this morning before I hit the road. There are four frames of buzzing busy bees in there. Some of the brood I added must have hatched. 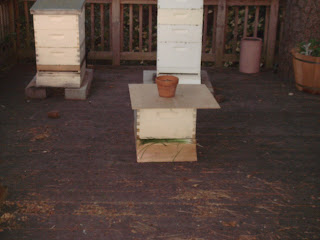 By the time I get back to Atlanta, my equipment for this hive will have arrived and it can have a real telescoping cover instead of this 2' X 2' sheet. 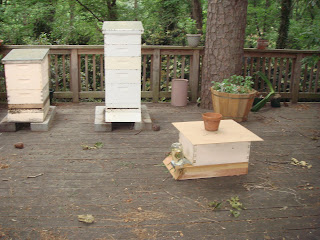