Checking up on the Small Hive Beetle 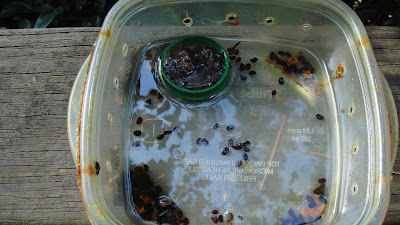 When I left for vacation a couple of weeks ago, the hives were full of small hive beetles. I think this was in part because I had been feeding my bees in the face of the dearth for the week before. I left a quart of sugar syrup on each hive on Sept 6, but haven't added to it since.

As a result there are less SHBs in my hive - that and the time of the year when they are diminishing anyway. Here are the opened Sonny-Mel traps from my two hives - I added new lure to each one today. They are working.

Inside Bermuda, the hive was boiling with very calm bees. They usually rush to attack and hate my intrusion with or without smoke. Today they went about business as usual and ignored me. I didn't add any syrup but will feed both hives beginning in the middle of October to keep them alive over the winter. 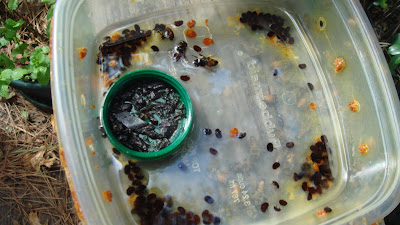 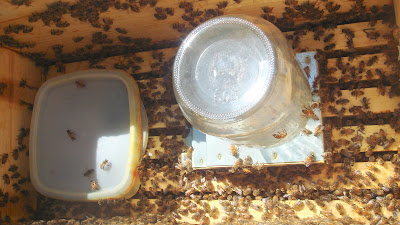 The last picture is what Mellona looked like inside. There are tons of bees in between the frames but not many on top of the frames. I have seen many bees going in and out of both hives over the last week with their pollen baskets full, so I think there are baby bees in Mellona. Also they were very quiet today - no queenless roar - so I think although they aren't as robust as Bermuda, they are doing fine.

I'll do a deeper check on them next weekend if their numbers continue to look low. I have to remember that this is a first year hive while Bermuda is a second year Varroa survivor strong hive.

I saw no evidence on the backs of bees of Varroa mites and I saw no deformed wing, but I'll also do a sugar shake and count next week. 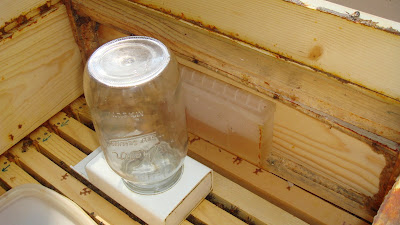 Notice that I added the vinegar frame trap (on the far right next to the wall) that I used last year to Mellona. I can't find the other one - when I do, I'll put it in Bermuda. It's on a frame somewhere!