Prizes Won at my Bee Club!

My vacation coincided with the Annual Beekeepers' Picnic and Honey Contest held by the Metro Atlanta Beekeepers every September. My sweet friend, Martha, agreed to take my wax block and honey and enter it into the contest in my absence. 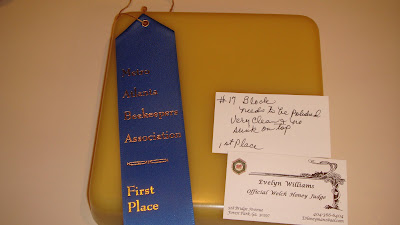 The wax block that I poured ten (10) times before finally feeling OK about my entry won FIRST PLACE and a blue ribbon. I am thrilled. The judge, Evelyn Williams, who is a certified Welsh honey judge, said that the block needed to be polished but was very clean and not sunken in on the top. I am so excited. I have looked all over the Internet to find out how one polishes a wax block, but I can't find out. Perhaps I could polish it with a well-worn men's handkerchief. I'll ask Evelyn, the judge, at our next beekeeper's meeting.

Pouring that block was something I did over and over again. Every time I thought the block looked perfect I would find another tiny speck of something. This final one I poured into a new pan that I bought just for the purpose and I left some wax in the bottom of the pot in which I melted it in hopes that the debris would remain there at the bottom of the melted wax. Guess it worked!

I am also grateful for my solar wax melter which did such a good job of melting the wax to begin my wax block journey. 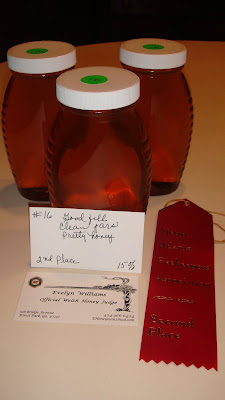 My queenline jar honey was entered into the light honey category. I won second place. She said nice things about it: "Good fill, clean jars, pretty honey." I literally never touched these jars from dishwasher to contest. I took them out of the dishwasher by lifting them with a worn clean dishtowel. I held them with the dishtowel while I opened the honey gate and filled the jars. Then I put the top on, holding it with a worn towel. (The "worn" towel is important because it is less likely to leave fibers on the jar). I then put the jars into the box in which they came and took them to Martha to enter into the contest. I am so pleased that they won.

This means that everything I entered into the contest won a ribbon of some kind.

I can't wait until next year, but for now I am going to take the beeswax block and turn it into handmade lip balm. Stocking stuffers from my bees!

Email ThisBlogThis!Share to TwitterShare to FacebookShare to Pinterest
at 12:10 AM
Labels: prize for honey, solax wax melter, wax block