Snow in the night 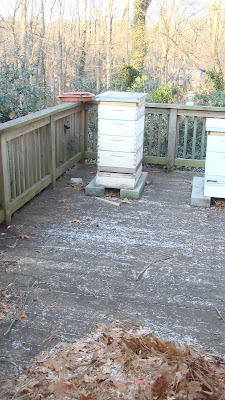 When I woke up this morning there was a smattering of snow on the deck in front of the hives. The water source was frozen solid. We were supposed to have flurries last night and obviously we did. Those of you who have been following this blog for a while will remember that around this time last year, one of my hives died of starvation.

I am so determined that they will not starve this year. To keep starvation from happening, I have put a Ziploc baggie of 1:1 sugar syrup on each hive every weekend since the beginning of February. I had some new syrup in the kitchen, so I bagged it up and right before I left for work I went out to the hives.

I opened each hive and found that they each still had sugar syrup in their Ziploc feeders. In Mellona, interestingly enough, there were about six bees walking over the baggie to the slit. I guess they were designated "nectar" retrievers since it was still around freezing and too cold for the bees to do much moving. Both hives have been feeling light and I don't want either to starve this year.

Email ThisBlogThis!Share to TwitterShare to FacebookShare to Pinterest
at 10:44 PM