Spring is Coming - Invitation to a Swarm 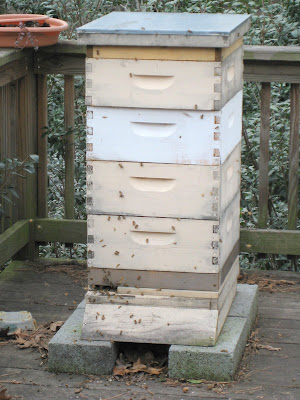 Both of my hives were very active today. Outside of Bermuda, the young bees started orientation as soon as the temperature reached 50 degrees (around 2 PM) and continued for about 2 hours. Mellona was almost as busy, although it is a smaller hive. 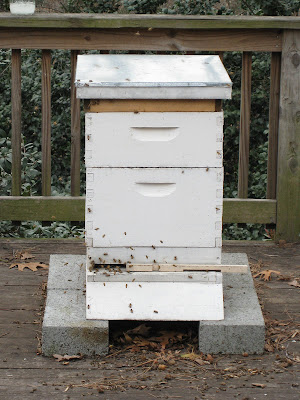 Last year I had an empty box standing on its side on the deck and a small swarm moved in without my even realizing it until I moved the box. I'd prefer to attract a swarm to a good, warm, well-equipped place to live.

So I put a hive body out on the deck on concrete blocks. It's a 10 frame deep, and I'm trying to move to all 8 frame medium boxes so in theory this is a box I wouldn't use for anything else this year. Even the nucs that I will be getting in April (which will come on deep frames), I'll put into deep 8 frame boxes. So if a swarm doesn't make this box it's home, I still won't be missing this piece of equipment.

Originally (in an earlier post), I described put drops of lemongrass essential onto an old hive body with a cover to try to encourage a swarm to move in. BeeHappy commented that the odor of the essential lemongrass oil will last longer if I made an oil paste to put on the frames instead.

So I did that today. If you click on the picture below, you can go to the slide show and see the process full screen:


Now let's hope a wandering swarm finds this lovely place to live and moves into it.