Hiving the First Swarm and Phase One of Swarm Two 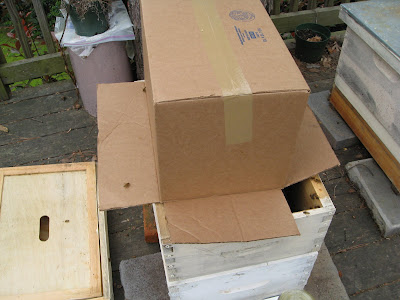 As with the first swarm I captured, I put this swarm in a medium hive body filled with frames, including one frame of capped honey and several drawn out frames from last year as well as frames with remnants of comb. I set an empty medium over the medium with the frames to keep the bees from spilling out all over the deck as I poured them into the box. I dumped the bees in and left the box upside down on the hive for a moment.

Then they were all in the hive. I put on the inner cover and the telescoping top. I'll take the empty medium off tomorrow. I put a Boardman feeder on the front of the hive and left to go for the second swarm. 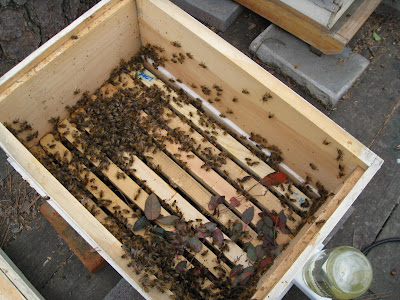 The second swarm was not easy AT ALL. As you can see the swarm is on the side of a dogwood tree, pressed up against a hurricane fence. In fact there were bees in the cluster on both sides of the fence. There was nothing to shake and no room for scraping the bees into the cardboard box I brought. 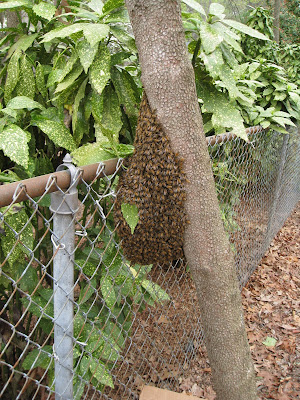 I set the box under the swarm. Then on second thought I put a sheet under the box. I wish I had put another sheet on the other side of the fence, but I didn't. I didn't take any more pictures because I was alone and this swarm was not happy with my intrusion. I got stung at least twice by two bees who got inside my helmet and veil (which was zipped to my suit???) The bees head-butted me and dive bombed me throughout this process.

They were already building comb on the leaf you can see peeking out of the swarm. Every time I thought I had the bees in the box, I'd find that many of them had returned to the tree. I decided that I had not gotten the queen. I began to work on the bees on the sheet and on the ground on the opposite side of the fence. After an hour of fruitless work, I imagined I saw bees with the nasonov signal, so I closed the box except for one opening and left to return at sunset to pick up the bees - which I thought would be comfortably ensconced in the box. (See next post) 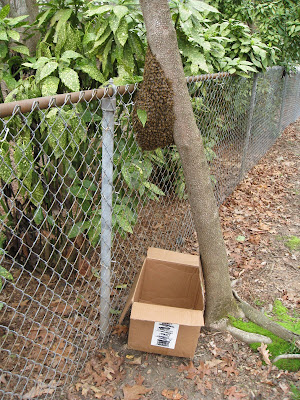