What Kind of a Place is This?

When I got the swarm yesterday, I didn't have much preparation time for housing them. I already had a swarm lure hive set up on my deck and given the press of time, I decided as I drove home with the bees in the car that the swarm lure hive would be their new home.

I confess, I didn't give them the best room in the house. I had not much hope for the swarm lure, so the hive was set up with a solid bottom board and old frames from the last two years. A few of the frames had comb with wax moth damage. A few of the frames had remnant of comb left from my cutting out wax moth damage. A few frames were completely empty. The last time I opened the swarm lure hive, three huge palmetto roaches ran out - you know the kind - about 2 inches long and fierce looking remnants of the stone age. (They've been around for 300 million years - who is going to argue with them?)

So today the swarm has been cleaning house. They were up and out before either of my established hives to get a jump on the day. You can see the busy housekeeper bees, carrying out all kinds of refuse. 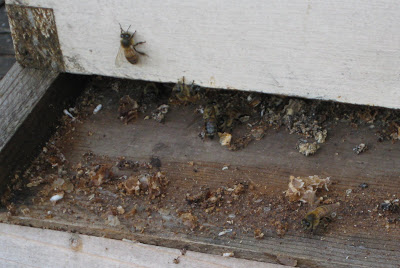 The two bees below are probably saying, "What kind of a place is this?" I'm sure if they could complain, they would report me to the bee landlord association or the board of health. 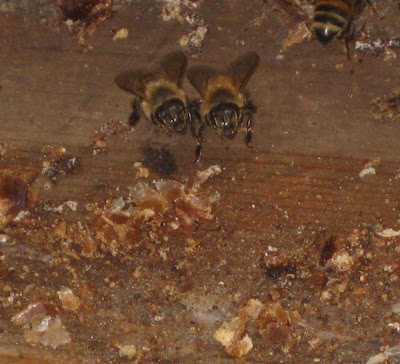 Tonight I got home after dark and went outside to take a picture of the hive. Look at the housekeeping progress that has been made! They have swept the landing deck almost completely clean and made neat piles of trash on the deck below the hive. 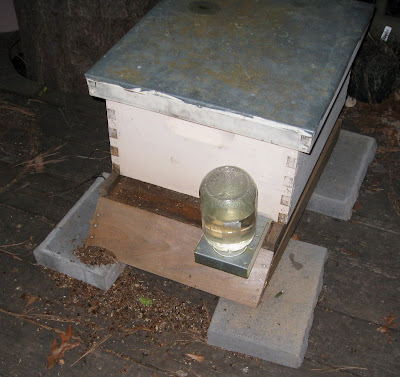 They are probably making wax - the Boardman feeder was completely full yesterday so they are sucking down the sugar water - a good sign of wax production. 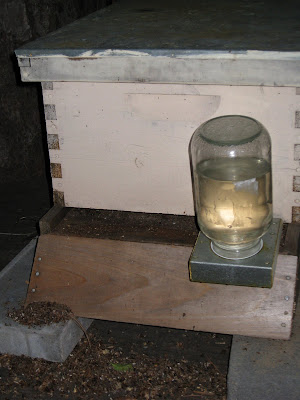 I have a good screened bottom board for this hive - I'll put it on when I open up the hive on Sunday or so. It's a Country Rubes Board and may make up for my giving them a less than decent place to live at the beginning!