What's Involved in a Hive Inspection 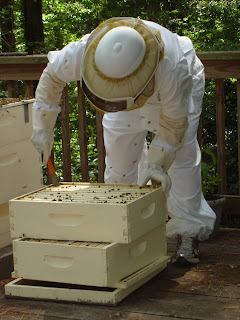 This weekend if the weather cooperates I'll make a video of an inspection - I'm no master of inspections, but I'll show you what I do when I do one. Meanwhile, there is a slideshow that I made last year when I went on a hive inspection of the beehives at the Atlanta Botanical Garden. Here's the link.

I spend a lot of time observing my hives from the outside. I watch them when I am at home for meal times and sometimes I just sit on my sunporch and watch their comings and goings.

However, this post is about inspecting the inside of the hive.

It's important to know why you are inspecting the hive. There could be many reasons.
Those are the purposes and thoughts I have for inspecting. Here are some other aspects of the hive inspection that I try to follow:
Everyone has their own tragic stories - I've dropped frames, dropped the inner cover on top of the bees below, squashed bees, killed bees with my hive tool, killed a bee when I was trying to smash a small hive beetle, brushed bees badly, etc.

You'll have yours too - it's just part of bee-ing a beekeeper.

OK, those are all of my thoughts for the moment. I'm sure I'll think of more about inspecting, but I'll save it for the video if I do it this weekend.