This month's program at the Metro Atlanta Beekeepers' meeting was given by Jacqui Miller, a Metro member, who is also a teacher at a Montessori school. She has set up an apiary for the school and her students take beekeeping as a class. In the class they are all learning about how to manage the hives and take care of the bees. 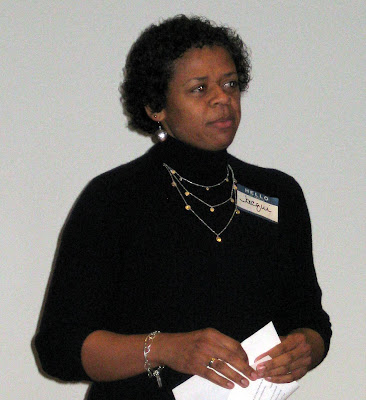 Jacqui described her well-oiled program in which there are student managers of the hives. The school bought bee suits for the program and the students are selling hive products to earn money to pay the school back for the suits! This year they sold honey and wax candles. 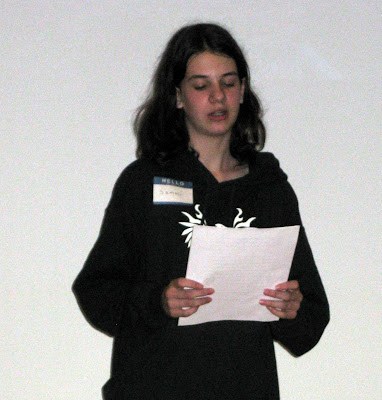 The students have had a number of calamities in their hives and have named the calamities accordingly. There was the "Big Bee Scare" when a large number of bees died, along with some yellow jackets. They also experienced the "Great Queen Disappearance." In the last adventure, one of the hives requeened itself. In the second hive they ordered a new queen and learned a lot about requeening in that process. 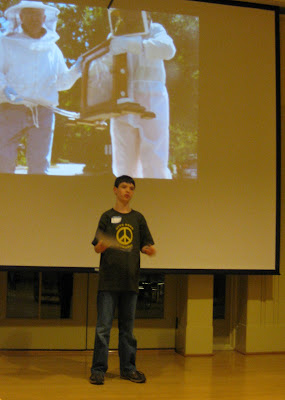 In addition these students acquired an observation hive (actually I think they traded up or down until they finally ended up with the third of three observation hives.) They use this hive to inform the younger students at the school.

These four students each took a turn describing parts of their experience in the beekeeping program. They were lively and entertaining. They were also brave - these four students stood in front of a room of 40 or so beekeepers and told us all about what they had learned in a confident and Power-point supported way.

Email ThisBlogThis!Share to TwitterShare to FacebookShare to Pinterest
at 12:01 AM
Labels: montessori beekeepers, requeening