Last week we had a couple of over 50 degree days. Bees in my three healthy hives were flying, orienting and bringing in pollen. I saw dead bees on the landing board of Persephone and no activity.

On the first over 50 day, I opened Persephone to see if she needed food. The baggie of sugar syrup left in there still had some syrup in it and I saw only a couple of bees. I felt sad - the hive must be dying. I put in a full baggie anyway in hopes that the bees in Persephone just hadn't gotten the memo that it was OK to fly. 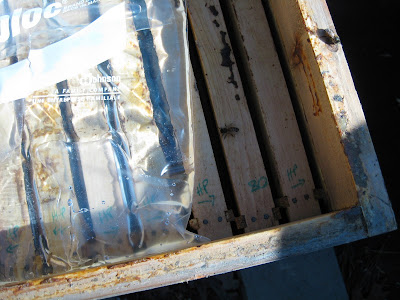 On the second over 50 degree day, there was some activity at Persephone. There wasn't beginning to be as much activity as at the other three hives, but I did see bees entering and leaving the hive. I worried - their approach to the hive wasn't a direct land-and-walk-in event, but involved some indecisive bee movement. I toyed with the idea that these were not hive occupants, but rather robbers from the other hives. 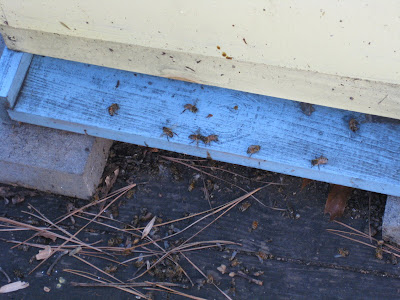 More hope arrived on Friday. I noticed that they had cleaned the dead bodies off of the landing and had apparently removed a roach who had died in the hive - pushed the roach into the pile of the winter dead bodies! Later I saw a couple of bees flying into the hive with pollen baskets filled - so now I am hopeful again. 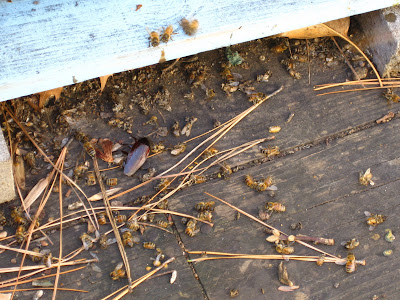 This hive was full of hive beetles as winter began - I attributed that to my feeding the bees (because the SHBs love the sugar syrup), but now with the advent of the dead roach, it's quite clear that the bees have not been alone in their hive this winter. Often the presence of this many critters means that the hive was weak going into winter. If we have another sub-freezing week, this hive may not survive until spring.

Lessons learned: This hive was a combination of a failing swarm hive and a low number hive that was just getting by. I should have made sure they were better set up for winter - added frames of bees, fed them earlier, paid better attention. And I should change the name - as people have pointed out Persephone as a name brings bad karma about winter thriving!