My hive, Persephone, has had a hard time of it. When I saw the queen earlier before our two cold snaps and snow in the last three weeks, I should have moved the hive to a nuc. I didn't and today when I opened the hive, there were few bees, no queen, no brood, no larvae. The hive looked done in. There were solid frames of honey, though, and bees still defending the hive against intruders.

I didn't do anything to the hive today, but shut it up and decided that it probably was a goner. I do see defenders on the landing working hard to keep intruders out, so I'm not totally sure the hive is done.

"A walk away split. You take a frame of eggs, two frames of emerging brood and two frames of pollen and honey and put them in a 5 frame nuc, shake in some extra nurse bees (making sure you don't get the queen), put the lid on and walk away. Come back in four weeks and see if the queen is laying."

Now the bees in the nuc have the resources to make their own queen. Hopefully they'll take the cells with eggs in them and make several of them into queen cells. The bees determine what eggs will be workers and what eggs will be queens. Without a queen, they make one and she's in business in 33 days.

Borrowing from Michael Bush, here is what he labels "Beekeeping Math:" 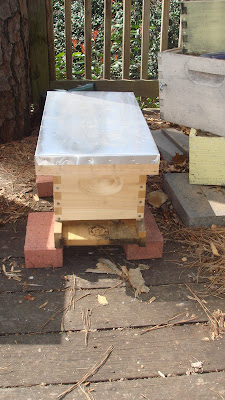 I hope I put enough bees in the nuc - I was paranoid about accidentally getting the queen from the hive from which I was taking the frames. Although the picture doesn't show it, I did reduce the entry before I ended my beekeeping chores today.

Also another beekeeper, Jerry Freeman, who is apparently also an inventor, sent me his small hive beetle trap which I installed today on Bermuda. Bermuda is my strongest hive and is full of small hive beetles. 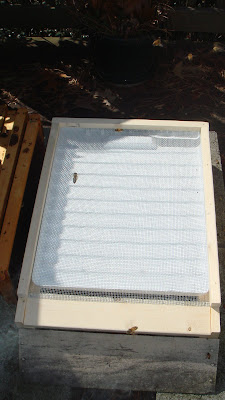 The picture below shows how the tray slides in and out of the bottom board. When I add the oil, we'll see how well it works. This is a great hive to test it because it has always had SHB - not ever in such quantity as to overwhelm or have much impact on the hive, but I'd still like to drown those little guys in oil! 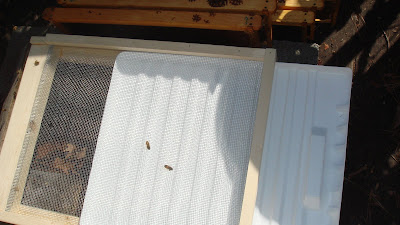 When I went through Bermuda, I found nothing in the bottom box besides empty comb. The bees had moved up to the next boxes during the winter. I removed that bottom box. The rest of the hive included two full boxes of brood, pollen, larvae, eggs and a third box of mostly unused comb. The top box is all honey. I plan to checkerboard the top two boxes to help discourage swarming.

So what you see (from the bottom up) is the hive stand, the Freeman trap, the slatted rack, and four boxes. The box I removed is sitting in front of the hive until tomorrow so that the few bees at remained in it can return to the hive. 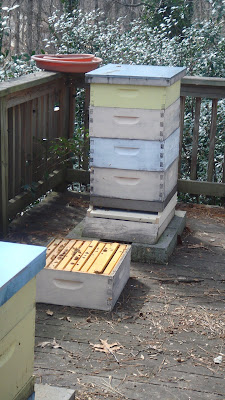