Yesterday when we inspected my hive at Blue Heron, we found absolutely no brood, no eggs, no capped brood, no queen cells, nothing. I've been wondering what happened. The hive was boiling over with bees when we installed the nuc and there are still lots of bees but no brood or any evidence of a queen.

A gardener at Blue Heron reported that she saw a huge swarm on Friday, hanging on a tree near the hive area at Blue Heron. Possibly the nuc hive swarmed. Sometimes a hive swarms to deal with overcrowding when they don't have enough stores and can't find another solution. However these bees were being fed and had lots of room in the hive.

The swarm being from my Blue Heron hive is less likely because there were no queen cells left in the hive - usually a hive that swarms is reproducing itself and would leave behind resources for the hive to survive. But a virgin queen in the hive would need to make her mating flight and wouldn't begin laying for a while after the hive had swarmed.

The only things to do at this point are:
The latter is a good thing to do in any event. If there is a queen in the hive, the bees will simply raise the brood I provided them and add to the numbers in the hive. If there is no queen, then the eggs in the cells with allow the bees in the hive to make a queen.

So today I brought a nuc filled with three frames of brood and eggs as well as two frames of honey to Blue Heron.

Important note: When we opened the hive, the bees did not make the characteristic "queenless roar" of a hive without a queen and we didn't use smoke and the bees were not angry and attacking as they were on Day one at Blue Heron.

Sam, Julia's son, helped by spraying the foreign bees and frames with sugar syrup to ease their introduction into the hive.

First I hung a frame rack on the side of the hive to hold the frames I planned to remove. Sam is holding the spray bottle and I have a bee brush to help with clearing the frames of bees when I swap them out. 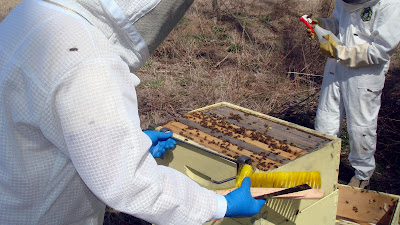 We pulled the frames from the hive to make space for the nuc frames of brood, eggs and honey. 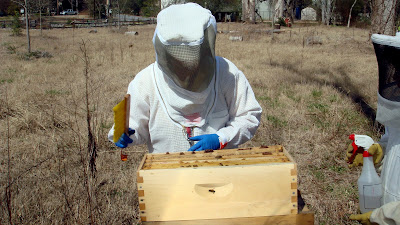 The frame in the picture below came from my hives at home. It had tons of eggs and some capped brood as well as nurse bees. Sam is poised to spray sugar syrup on the nurse bees as we put the frame into Blue Heron.

We successfully moved all five frames to the hive and took out five frames. Yesterday I had put a new box on the Blue Heron hive so these frames were not used yet. It was easy to remove the bees from them and make room for the frames from home. 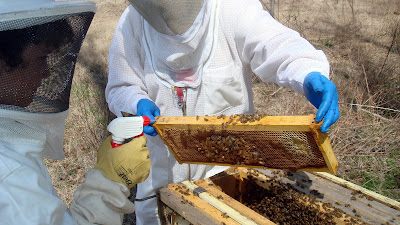 When we finished the transfer, we shook the bees off of the original Blue Heron frames back into the hive and closed up the transfer nuc.

Yesterday I noticed the box that I brought over for the second box on the hive had one side broken. In addition to the frame transfer, I also moved all of the frames in the second box into a box that didn't have any damage. I left an empty box on the Blue Heron hive because we have been feeding sugar syrup in baggies, but I should have removed that box. We will feed with a Boardman to avoid disturbing them while they make a queen.

I am in a dilemma about the empty top box. If I leave it they will probably make a mess of comb in it since there are no frames in it (set up to shelter a baggie feeder that is no longer there). If I remove it I'll disturb them in the queen making process.....hmmmm.

Probably the best solution will be to leave the empty box on until a queen cell is probably capped - that would be in about 9 days - so I'll leave the empty for 10 days for good measure - until March 18 - and then remove it.

In the picture below I am moving the frames to the box that is not in disrepair. You can also see the transfer nuc sitting atop Julia's hive. 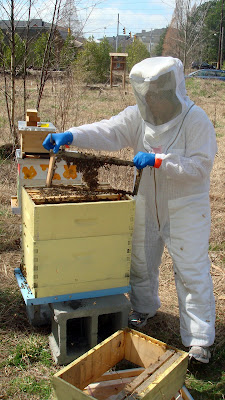