Julia and I visited Blue Heron this afternoon. We installed the nucs on February 25. We've given them sugar syrup about every three days since then. We haven't opened the hives because we wanted to get them well started. Usually you wait at least a week after installation to check on the hive.

There's good news and there's bad news. In the bad news category: We opened my hive which was boiling over with bees. They are in an eight frame box and although we had given them the five frames that came with the nuc and three frames with starter strips, they had already built out the wax in all eight frames. The comb was beautiful, but the cells were all empty. There was absolutely no sign of a queen - not any capped brood, no eggs, no larvae, nothing.

This hive will die out if there is no queen. I called the bee club president who purchased the hives we are using at Blue Heron and he told me to call the supplier, so I did. Hopefully I'll hear back from PN tomorrow, but just for insurance, I'm going to put a frame of brood and eggs into this hive tomorrow from one of my other hives.

We put a box on the hive since they had more than built out the frames so they could keep busy and because the frame I'll bring tomorrow is a medium. We also gave the hive a baggie of sugar syrup. 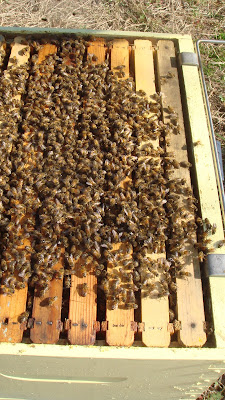 There was much better news when we opened Julia's hive. Note that the first frame we removed was the next to the last frame - not the last frame. In an inspection, bees get killed but to minimize this, removing a frame that is not next to the hive wall helps. When you are returning that last frame to the hive, having it be in position 2 or 9 makes the bees on the frame press against other bees or wax rather than the hard wood of the hive box and saves bee lives. 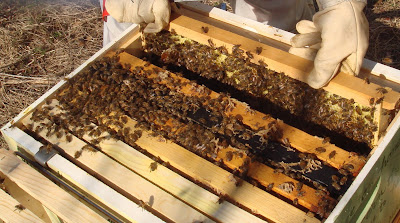 Julia's hive is in a 10 frame box. The bees were doing well with capped brood on at least four frames. The remaining frames that we put in the hive when we installed it were empty frames with starter strips of wax. Below you can see a built out frame of wax drawn by the bees. In the lower left corner we saw her majesty (circled in red!). We were so relieved and thrilled to see her. 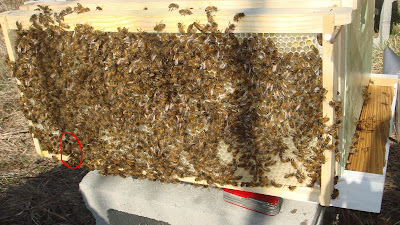 We put a baggie of sugar syrup on Julia's hive. We didn't put a new box on Julia's hive because there were about 3 frames that hadn't been even started by the bees and the fourth was barely started (see below). In that photo you can see how the bees begin to build out the wax from starter strips.

Note: We found the queen on the second to last frame in Julia's hive. She is likely to be found there in future inspections so we made sure to notice where we found her.

Her hive will need a new box next weekend. 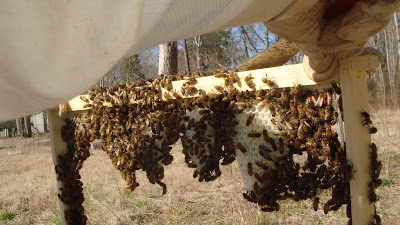