Dead Bees on the Landing in the Early Morning

Unusual for October 18, we had 37 degree weather last night. This morning there were dead bees clinging to the landing of both Bermuda and of Mellona. Dead bees look like living ones, but these had no life in them. I wondered if they had come home too late or if they were ready to die and were pushed out of the hive, but not all the way to the ground.

They have the appearance of perhaps trying to cluster together but there certainly weren't enough of them to manage the cold. 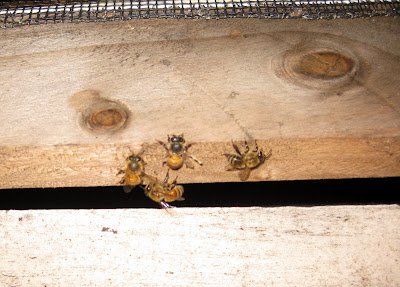 There were also dead bees on Mellona's landing area. These looked more like they had been pushed out. Maybe when it's cold the mortician bees simply drag the bees to the front of the hive and don't fly out with them. 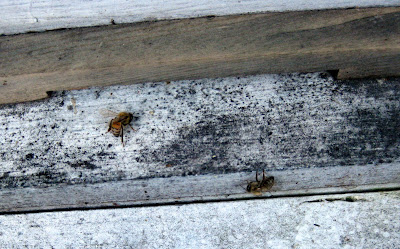 Email ThisBlogThis!Share to TwitterShare to FacebookShare to Pinterest
at 9:51 AM
Labels: dead bees, mortician bee